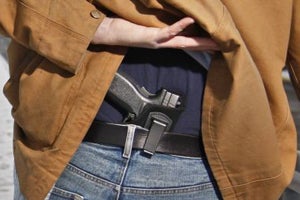 California Penal Code 25400 PC makes it a crime to carry a concealed firearm, either on your person, or vehicle under your control.

If you carry a gun in California, you are facing an often complex set of firearm laws and restrictions. Under California Penal Code Section 25400, it's a crime to carry a concealed firearm, either on your person, or vehicle under your control.

Under PC 25400, a firearm is any device that is designed to be used as a weapon.

It's interesting to note here PC 25400 only applies to carrying a “concealed” firearm. If you are carrying a firearm in plain view, then you can't be in violation of this specific law.

However, California Penal Code Section 26350, criminalizes the act of openly carrying an unloaded firearm that is exposed in a public place. So, what exactly is considered “concealed?”

Besides the obvious meaning of concealed, even if the weapon is just partially concealed and can be identified, you could be charged with carrying a concealed weapon.

As an example, let's say you were pulled over by police on a traffic stop. After you were asked to step out of your vehicle, the police officer notices a few inches of a gun barrel coming out from your pocket. This would be considered carrying a concealed weapon, even though it was just partially concealed.

What does “carry on your person” mean? In basic terms, it means you had physical possession of a concealed weapon. Of course this includes carrying the weapon directly on your person, such as in your pocket or waistband. However, it also includes concealing a weapon in any item you may be holding, such as a gym bag.

The key term here is having possession of the concealed weapon in some form. To be convicted of violation of Penal Code 25400, the Los Angeles County prosecutor will need to prove you actually knew about the presence of the weapon. See related: Gun Rights at Airport.

If you have been accused of carrying a concealed weapon, you need to contact a Los Angeles criminal defense lawyer at Eisner Gorin LLP. A conviction would result in some harsh legal consequences, impacting your life you many years.

Our attorneys will need to take a close look at the specific facts and circumstances that lead to your arrest in order to develop an effective strategy.  Now that we have covered a basic overview of carrying a concealed weapon, let's examine the legal definition, penalties and legal defenses below.

Under California Penal Code Section 25400, the crime of carrying a concealed firearm is legally defined as:

In more basic language, this legal definition makes it a crime of carrying a concealed weapon if you:

So, what is the legal definition of a firearm? Under California law, a firearm is any device that can be used a weapon where a projectile can be expelled through a barrel by the force of an explosion.

This includes pistols, revolvers, handguns, shotgun, rifle, and even a taser. In order for the Los Angeles County prosecutor to obtain a conviction of carrying a concealed firearm, they must be able to prove all the elements of the crime, beyond any reasonable doubt.

It's important to note that if you are charged with carrying a concealed weapon, you could also face other offenses, such as:

If you are convicted of carrying a concealed weapon, in violation of California penal Code Section 25400, it's typically a misdemeanor offense.

The legal penalties include:

However, there are circumstances where a violation of PC 25400 can become a “wobbler” or a felony crime.

You could face a felony offense if:

If convicted of carrying a concealed firearm as a felony crime, the legal penalties include:

Additionally, if you are not a legal immigrant, a conviction for carrying a concealed weapon in California can lead to deportation. Will you lose your gun rights?

If convicted of a misdemeanor crime of carrying a concealed weapon, it will not revoke your legal right to own or possess a firearm. However, a felony conviction could subject you to a lifetime ban from owning or possessing a gun in California, unless your firearms rights are restored.

If you have been charged with carrying a concealed firearm, in violation of Penal Code Section 25400, an experienced Los Angeles criminal defense at our law firm could use a variety of legal defenses on your behalf. These defenses include:

You didn't know that you possessed a firearm – since knowledge of firearm possession is a key element that has to be proven, our criminal attorneys may be able to argue you simply did not know you had possession of the firearm and can't be guilty of this crime.

There are a variety of situations where we may be able to make this type of defense. For example, a friend could have left the firearm in your vehicle without your knowledge.

The weapon seized was from and illegal search and seizure – the Fourth Amendment to the United States Constitution protects your constitutional rights against unreasonable searches and seizures. In many cases involving weapons, it's not uncommon for police to discover a weapon after a traffic stop or some other form of contact.

Typically, an officer will search you or your car as a matter of routine and officer safety. If their search and seizure is illegal, the prosecutor will lose their main evidence against you. In some cases, our lawyers may be able to argue police lacked probable cause or a valid search warrant and your rights were violated.

If we are able to convince the prosecutor your weapon was discovered as the result of an illegal search, they will most likely dismiss the carrying a concealed weapon case against you.

Depending on the circumstances of your case, other possible legal defense include you were carrying the weapon for self defense, the weapon was in the trunk of your car, or in a locked container. Finally, if you have a license to carry a concealed weapon, you can't be guilty of violating Penal Code 25400.

If you are facing charges of carrying a concealed weapon, your next step is to contact the Los Angeles criminal defense law firm of Eisner Gorin LLP.

Let our lawyers take a close look at the specific facts and circumstances in order to build a solid defense strategy.

Early intervention by our lawyers can have a tremendous impact on the outcome of your case. We offer a free immediate response. Call our office at 877-781-1570.