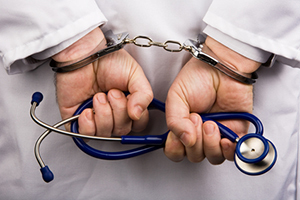 Our Los Angeles criminal law firm represents all types of medical professionals who have been charged with a medical insurance fraud in California.

We have represented numerous physicians, including general practitioners, dentists, chiropractors, and others, who are charged with medical insurance fraud.

Insurance companies don't pay physicians as much for their services as they were paid several years ago. Since insurance companies have reduced the amount paid to doctors, there has been a substantial increase in doctors facing criminal prosecution for health care fraud in their billing.

In fact, insurance companies actually employ investigators to closely review medical claims in order to determine if fraud occurred. If the investigator discovers potential fraud, the case is referred for potential prosecution.

In most cases, it involves issues surrounding billing fraud, meaning a doctor billed for more procedures then actually performed. In some cases, the patient never had any work performed by the doctor's office.

If you are a physician under criminal investigation for insurance fraud, or had a search warrant executed where your patient records were seized, you should immediately contact our California criminal defense lawyers to review the details of your situation. Our law firm has experience protecting doctors who are facing any type of insurance fraud case.

Fraud in the medical profession can take many different forms. California Penal Code Section 550(a) prohibits most forms of health care fraud and medical billing fraud.

The most common insurance fraud cases involve the following:

Sometimes, the victim is a State or federal agency which has been overbilled either for procedures that were not actually performed, or were performed on individuals who were not in fact eligible for reimbursement, but whose work was performed under false pretenses.

For instance, certain State programs provide for reimbursement for low income children for dental care. We have represented dentists who were accused of having performed work on adults, but falsely claimed that their patients were under 18 years old to qualify for the reimbursement money.

In these cases, there is often an accompanying allegation that the physician received a kickback or other form of compensation from the patients.

Other related offenses to medical fraud include:

Medical insurance fraud cases are generally handled by a specialized unit of prosecutors with the District Attorney's office, known as the Healthcare Fraud Division. These cases are generally felonies as they involve large loss amounts and are based on years-long investigations typically conducted by the California Department of Insurance.

The consequences of being convicted of one of these serious felony offenses are severe, including steep fines and potentially State prison time. For physicians, the stakes are particularly high as a felony conviction often results in adverse licensure consequences with the Medical Board of the State.

For this reason, it is often advisable for the client to seek formal advice from a experienced criminal defense attorney before deciding whether to accept a potential plea deal or take the case to a jury trial.

Every case is different and the strategy for most effectively defending against the charges will depend on the particular case facts. However, several defenses commonly recur in these matters.

First, there is a finite statute of limitations period in which the government can charge a physician with medical insurance fraud. This period is usually four years from the date of discovery of the offense. The fraud is deemed discovered when a person of ordinary prudence obtains facts which would lead them to believe they were the victim of a fraud.

Alternatively, the date of discovery can run from the date at which law enforcement obtains facts sufficient to put them on notice that a private insurance company has been the victim of a fraud.

Given the complex nature of large insurance companies, the legal date of discovery, which puts law enforcement and the victim on inquiry notice, is often a hotly litigated issue. It could be that someone at the company is in possession of suspicious information, but they do not report that information up the chain.

Perhaps some investigation is done, but then the matter is put on the backburner for several years and no follow up investigation is performed. Depending on the particular facts of the case and the progression of the investigation, it may be possible to successfully argue that the statute of limitations has run and therefore the case must be dropped.

The issue of the physician's actual knowledge is also often litigated at a preliminary hearing or trial on an insurance fraud claim. In many cases, the physician may not be aware that the information being submitted to insurance is incorrect, even if it later turns out to be inaccurate.

It could be that the patient presented false information to the physician which they had no reason to believe was inaccurate. In cases where the government can establish that the physician obtained kickbacks or other compensation, however, this may be more difficult to argue.

In short, physicians charged with medical insurance fraud face a very serious situation potentially affecting their ability to earn a living as well as jeopardizing their liberty.

If you, or someone you know, works in the medical field and is charged with one of these serious felony offenses, or is under investigation, contact our experienced criminal defense attorneys for a consultation to determine the best steps to protect your rights.