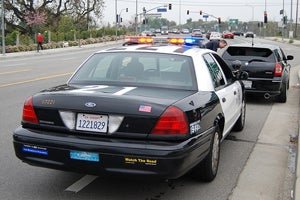 There are several California statutes covering giving false information to law enforcement, which are typically a misdemeanor crime.

However, in some cases, the legal consequences can be severe. Experienced police officers know when someone is lying to them because they have been lied to so often in the past.

They know the tell-tale signs. The emotions don't fit, the body language is wrong, too many details, saying “huh?” too much, and lying about small stuff. Over the years, they develop a pretty reliable instinct or a gut feeling in detecting lies. Once police suspect you are lying to them, you will come under closer scrutiny.

If you have been accused of giving false information to a police officer in Los Angeles County, you will need an experienced criminal defense attorney to have the best chance of avoiding a conviction.

Giving a police officer false information is a crime under Vehicle Code 31 VC. This code section states "No person shall give, either orally or in writing, information to a peace officer in the performance of their duties when such person knows that the information is false."

This definition is pretty clear. Providing false information can include:

The most common example under this code section is when an individual gives a police officer a false name after being stopped by police. In most cases, giving false information to a police officer is a misdemeanor offense.

If convicted, the legal consequences can include up to 6 months in county jail and a fine up to $1,000. However, there are certain circumstances where providing false information to a police officer can result in more serious criminal charges.

It's a crime to knowingly make a false report of a crime that a misdemeanor or felony offense has been committed to an individual who is employed to accept a crime report. This includes peace officers, police officers, district attorney, grand jury, or even a citizen employed by a state or local agency.

Under PC 148.5, the person reporting the false crime must know it to be false and know that the person whom they are giving the report is engaged in their official capacity to take the report.

Some of the common examples of filing a false report include:

A very common example in Los Angeles County includes situations when someone reports a theft of their property in order collect on an insurance policy. Another example is a false report of a domestic violence incident on a spouse in order to gain an advantage in a bitter child custody dispute.

Additionally, under California Vehicle Code 10501, it's a separate crime to file a false report of a vehicle theft.

In order to be convicted of filing a false report, the prosecutor must prove beyond any reasonable doubt, you:

If you are convicted of a misdemeanor offense of filing a false report of a crime, you could face up to 6 months in a county jail and a fine of $1,000. You could be charged with a felony crime if you committed the offense in addition to fraud or perjury.

A conviction could have a significant impact on your future. An experienced criminal defense lawyer can use a variety of legal defenses on your behalf to have the charges reduced or dismissed.

These defenses include that you had good faith or believed the information you provided was true. Another potential legal defense is to argue that you had a good faith belief you were not speaking to someone who was acting in their official capacity to accept such report.

It's a crime to provide a false name or false identifying information to a peace officer after you have been lawfully detained or arrested for the purpose of avoiding proper identification or evading the process of the court.

This includes providing a false date of birth or any other information that supports false identification.

The most common example in Los Angeles County includes situations where someone was lawfully detained on a traffic stop and they give the police officer a false name.

In order to be convicted of providing false identification to a pace office, the prosecutor has to prove you:

If convicted of the misdemeanor offense of falsely identifying yourself to a peace officer, the legal penalties can include up to 6 months in a county jail and a fine of up to $1,000.

In California, a “peace officer” is an individual who is engaged in their law enforcement duties and includes a police officer, sheriff, California Highway Patrol, marshal, or an investigator who is employed by the district attorney's office.

If you have been accused of providing false information, you need to consult with an experienced Los Angeles criminal defense attorney at Eisner Gorin LLP. Depending on the circumstances, you could face a misdemeanor or felony conviction leading to jail time and large fines.

Avoiding a conviction can be critical to your future.

We need to review the details of your case in order to determine best available options. Call our law firm at 877-781-1570.