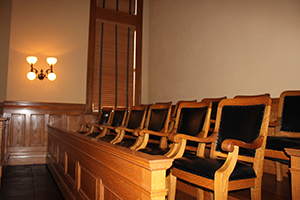 Anyone charged with a crime in California has the right to have their case heard in a jury trial.

The California constitution affords a defendant in a criminal case the right to have their case heard in a jury trial. A jury is a group of twelve members of the public plus several alternates who are tasked with being the finder of fact in a criminal case and decide whether a defendant is guilty or not guilty of the crimes for which they were charged.

Anyone who has been charged with a misdemeanor or felony crime is entitled to a jury trial and it's a crucial part of the criminal case process. The right to jury trial can be waived by the parties in favor of a bench trial, meaning that the judge rather than a jury will be the finder of fact.

This is sometimes preferable depending on the facts of the case and the nature of the charges. In most cases, however, a criminal case which proceeds to trial will be heard in front of a jury.

There are several important features of a jury trial which exist to safeguard the rights of the accused. First, the composition of the jury must represent an accurate cross-section of the community.

This means that while a jury will never be exactly proportionate to the demographics of the community in terms of race, ethnicity, gender, sexual orientation, employment, national origin, etc., the parties should not make attempts to purposely make the jury unrepresentative.

The classic example of this is striking jurors of one particular race or ethnicity on the assumption that jurors of a different race or ethnicity are more likely to be favorable to one party or the other. A representative jury ensures that the accused enjoys a jury of their “peers,” as guaranteed by the constitution.

To give readers a more useful information about jury trial, our California criminal defense lawyers are providing an overview below.

Defendant's Right to Have a Lawyer

At a defendant's arraignment, if they enter a "not guilty" plea, there will be several pretrial trial proceedings designed to resolve the case. If a plea bargain is not reached, then the case will proceed to trial. At a jury trial, the accused enjoys the right to counsel, but also the right to represent themselves if they so choose.

While it is almost never advisable, the court must honor the defendant's knowing and intelligent request to act as their own advocate before the jury in lieu of an attorney. Because the right to counsel is guaranteed by the constitution, the court must appoint an attorney to represent a criminal defendant at a jury trial if they cannot financially afford to hire one.

That attorney must further provide competent and effective representation in order for the accused's right to counsel to be vindicated.

Then the jury trial proceeds by way of introducing evidence. This evidence can take the form of live testimony by witnesses, exhibits which consist of photographs or physical objects, and the playing of video or audio recordings.

The accused enjoys the right of cross-examination and confrontation at a jury trial. This means that the court must permit the defendant, most often through their attorney, to confront the witnesses against the defendant and ask them questions designed to undermine the reliability of their testimony or their own credibility.

With limited exceptions, the prosecution cannot rely on statements by witnesses who refuse to be subject to cross-examination.

In addition to so-called “fact witnesses,” who testify to their own personal observations of the facts, either the prosecution or defense may seek to introduce expert opinion testimony.

These experts can discuss scientific principles or research which may be relevant in the jury trial or present opinions based on other specialized knowledge which is relevant to help the jury understand the evidence.

Many jury trials become a “battle of the experts,” where each side presents scientific or other opinion testimony and the jury must decide which expert it finds more credible.

Once all the evidence has been submitted, the prosecutor and criminal lawyer will present their closing arguments. During this step of the California criminal jury trial process, both sides will provide a recap the evidence in an effort to persuade the jury.

After the closing arguments in a California criminal case, tit will proceed to the jury deliberations stage. The judge will read the relevant jury instructions to jurors. After the instructions have been read, the jury will start their deliberations. The jury will pick a "foreperson" to guide them. The jurors are expected to debate the case until they unanimously reach a guilty or not guilty verdict.

The jury is allowed to ask the judge questions about the case, including specific testimony and to review photos from the scene of the alleged crime. They are not allowed to speak with other people about the case outside the jury. Once they reach a verdict, or have debated the case without a verdict to a point where there is no reason to continue, jury deliberations are over and they inform the judge.

Another guarantee of the jury trial system is a unanimous verdict of guilt. Unlike in certain civil procedures where a less-than-unanimous jury can nevertheless render a verdict, the constitution ensures that criminal defendants must be found guilty only by a unanimous jury's verdict. If even one juror is unconvinced, the case may be ruled a mistrial.  This is called a “hung jury,” but the case may be retried with a new jury.

One of the major protections which a criminal defendant enjoys at a jury trial is the presumption of innocence. Legally, a defendant who has been charged and even held to answer after a preliminary hearing is presumed innocent.

The jury is charged with respecting that presumption of innocence unless and until it is presented with proof beyond a reasonable doubt, which is the highest standard of proof in the law. The prosecution always bears the burden of proof in a criminal case.

If the jury unanimously finds the defendant "not guilty" on all California criminal charges, the case is dismissed. If the jury unanimously finds defendant guilty, then the defendant will proceed to a sentencing hearing. California criminal procedure has a mechanism for defendants to set aside their convictions and obtain a new trial even after a jury has found them guilty of a criminal offense following a jury trial. This is known as a motion for new trial and described under California Penal Code 1181.

The criminal defense attorney will present mitigating factors on behalf of their client, and the prosecutor will present aggravating factors. After the judge hears arguments from both sides, they are responsible for determining the specific sentence that is legally permitted.

The jury trial process is the ultimate protection of a criminal defendant's right to liberty.  While no system is perfect, the adversarial jury trial system has proven to be the greatest safeguard of the rights of the innocent and to hold the government to its burden of proof.

Our experienced team of criminal defense attorneys have litigated many cases through jury trial and obtained excellent results for our clients. If you or a family member is facing a jury trial in a criminal case in a California state court, including all Los Angeles County criminal courts, contact us for an initial consultation.