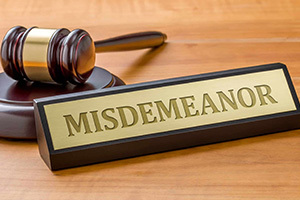 In California, a misdemeanor is described any offense where the maximum sentence is no longer than one year in a county jail.

Getting charged with a crime in California is typically a stressful experience as many defendants don't have any prior experience dealing with the criminal justice system. Thus, their normal reaction is to seek answers for many questions about the type of crime there have been charged with.

In the state of California, there are different levels of crimes. These include infractions, misdemeanors, and felonies. Obviously, a felony charge is the most serious and carries much higher penalties. However, this page will examine in detail misdemeanor crimes and how courts and prosecutors handle these types of cases in the criminal case process.

There are also come California crimes that are commonly known as a “wobbler,” which can be charged by the prosecutor as either a misdemeanor or a felony. A prosecutor will normally base their decision on how to file on the circumstances of the case and defendant's criminal history.

In simple terms, a misdemeanor crime is less serious than a felony crime and doesn't carry any potential to be sentenced to a California state prison. A misdemeanor is described as a crime where the maximum sentence is no longer than one year in a county jail and a fine up to $1,000.

An aggravated misdemeanor is a crime can be punished by up to one year in a county jail and a fine of $1,000 or more. Also, anyone who was convicted of a misdemeanor can be placed on probation for three to five years. Misdemeanor cases can be filed by the Los Angeles City Attorney or the District Attorney's Office, depending on where exactly the crime occurred.

After you have been arrested for a misdemeanor case in California, then it will proceed through the normal stages in the criminal case process, including the arraignment, bail hearing, pretrial, and jury or bench trial. However, it should be noted the vast majority of misdemeanor cases never make it to the trial stage. Your defense lawyer could negotiate with the prosecutor to have the case dropped or come to an agreement on a plea bargain.

To give readers more useful information about misdemeanor crimes, our California criminal defense attorneys are providing an overview below.

The standard penalty for a misdemeanor crime is up to one year in county jail and/or a fine up to $1,000. However, unless the code states otherwise, any offense considered a misdemeanor will have county jail time of up to 6 months.

Many misdemeanor sentences provide for probation only and a fine or some community service time. There are a few misdemeanors that have fines up to $2,000. It should be noted that this list above does not include all California misdemeanor crimes, rather the most commonly charged.

Probation for a Misdemeanor Conviction

Domestic violence charges will normally include the court issuing a restraining or protective order against the defendant which prohibits any type of contact with the victim and they are required to keep a certain distance. Also, a misdemeanor conviction will normally result in a criminal record that can see by potential employers and others who conduct a criminal background search.

As stated, a “wobbler” is a crime that can be charged as either a misdemeanor or felony. In such cases, the prosecutor has the discretion on how to file and it normally depends of the specific circumstances of the case and the defendant's criminal history. The most common “wobblers” include:

Any wobbler that was charged as a misdemeanor crime can't carry more than one year in county jail. Also, if charged with a felony, it's possible to have the crime reduced to a misdemeanor by plea agreement prior to trial or by the motion of the judge.

If you were charged with a misdemeanor crime, you need to consult with our Los Angeles criminal defense attorneys to review the details of the case and legal options. We have decades of combined experience and know how effectively defend anyone facing a misdemeanor offense. We are skilled courtroom negotiators and may be able to get the charges reduced or even dismissed.

Early intervention into your case by pour law firm can be crucial to the outcome. Through our prefiling intervention process, we might able to negotiate with the prosecutor to avoid the formal filing of criminal charges. Due to our extensive experience in the field of criminal law, we are very familiar with the local prosecutors and judges in all the Los Angeles County criminal courthouses.