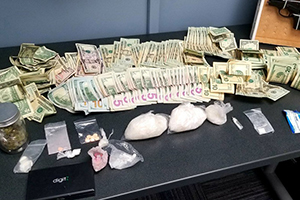 Possession, distribution, and selling large qualities of illegal drugs has negatively impacted citizens throughout California for decades. Most drug arrest only involve a street dealer or user and it's typically difficult to find and arrest the people who run large-scale drug operations.

In an effort to prosecute people who organize and operate these illegal drug operations, the legislature passed laws that make it a crime to have possession of drug sale proceeds.

In order to be prosecuted with HS 11370.6, there are some crucial elements of the crime that must be satisfied.

For example, a defendant will need to have possession of more than $100,000, which is typically cash. Also, a prosecutor will have to prove the money a defendant possessed was acquired from manufacturing, transporting, or selling illegal drugs.

It must also be proven the defendant knew that the money was a result of the sales of drugs.

HS 11370.6 makes it a crime for someone to have possession of drug-related money or to use the money to purchase drugs, even in a situation where the money they were holding came from a legal source.

To give readers more useful information about possession of drug money, our Los Angeles criminal lawyers are providing a review below.

Several different types of conduct are encompassed in Section 11370.6's terms but the overall purpose of the statute is to criminalize the often large amounts of cash associated with the elicit drug trade.

There will of course be cases where law enforcement is not able to arrest a drug buyer or seller dealing in large quantities of narcotics with the actual drugs in hands.

Sometimes, however, law enforcement will intercept the money which was either used to buy or sell the drugs. Health and Safety Code Section 11370.6 allows the government to seek harsh felony sentences in those cases as well.

Health and Safety Code Section 11370.6 provides that any person who possess money or “negotiable instruments,” – i.e. currency, stocks, bonds, commercial paper – in an amount greater than $100,000 which were obtained as a result of the unlawful sale, possession for sale, manufacture, transportation, etc. of any illegal drug is guilty of a crime.

The flip side of the first provision – possession of money obtained through selling or manufacturing drugs – is the second provision which penalizes possessing money or negotiable instruments in excess of $100,000 which are intended by the possessor to be used to purchase illegal narcotics.

In simple terms, in order to be convicted of HS 11370.6, the prosecutor has to prove the following elements of the crime:

A prefiling intervention, discussed elsewhere on our webpage, may be effective in influencing this filing decision.

Section 11370.6 contains a particular provision addressing the case of a lawyer who takes a legal fee to represent a defendant in the investigative or prosecution stage of a drug case.

While technically many criminal defense attorneys who represent defendants charged with drug offenses may indirectly come into possession of drug proceeds, it would be a significant interference with the Sixth Amendment constitutional right to counsel if every drug defendant's lawyer were charged with a felony for accepting legal fees.

In recognition of this reality, Section 11370.6 requires additional proof in a prosecution of a defense attorney that the government prove that the attorney had the intent to participate in the unlawful narcotics conduct or to disguise or aid in disguising the source of the money, i.e. launder the money.

In determining the guilt or innocence of a defendant charged under Section 11370.6, judges and juries are guided by several factors. First, they can consider whether the defendant has a lack of other gainful employment which would provide a reasonable alternative explanation for the possession of more than $100,000 in cash.

Second, a qualified controlled substances expert can testify as to the source of the large amount of money. Third, documents of ledgers, often called pay/owe sheets, which indicate that drug sales activity is connected with the defendant may be considered.

There are often innocent explanations for possessing large amounts of money. Health and Safety Code Section 11370.6 does not criminalize all possession of cash in excess of $100,000. Rather, as indicated by our discussion here, this section is directed at individuals with provable connections to drug activity.

The presence of ledgers, evidence of prior drug transactions including controlled buys, the lack of gainful employment of the defendant, and the testimony of cooperating witnesses or undercovers are all factors which the government will often present to bolster their case.

If you or a family member has been charged with the serious California drug offense of possession of drug proceeds or drug money in violation of Health and Safety Code Section 11370.6, contact our experienced criminal defense attorneys for a consultation.

We can advise you on the steps to take to protect your rights and bring your case to a successful resolution depending on the particular facts and circumstances of your or your loved one's matter. We might be able to negotiate with the prosecutor for reduce charges of even a case dismissal.

Further, though prefiling intervention, we might be able to avoid the formal filing of charges.