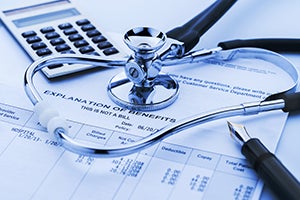 18 U.S.C. § 287 makes it a crime to submit a false claim to the government for payment and typically related to health care fraud.

A false or fraudulent claim presented to a government employee demanding payment from the employee himself would not be covered.

Essentially, 18 U.S.C. § 287 is a catchall provision designed to criminalize those who attempt to obtain money, goods, or services from the United States government through its various departments and agencies via the presentation of false, fictitious, or fraudulent claims.

A mere good faith mistake as to the entitlement for payment, or a contract dispute between a contractor and the United States government as to the terms of payment to the contractor should not form the basis for a prosecution under this section.

There are many different types of health care fraud offenses in federal court:

As stated, the federal False Claims Act applies to an individual or business that directly or indirectly contracts with the United States government.

It creates liability against any:

Submitting an inaccurate claim occurs knowingly if it's submitted with knowledge or even in situations where the individual or business entity failed to conduct their due diligence.

This means that liability under the False Claims Act already occurs if someone should have known, for instance, a specific federal billing code was changed, but due to their lack of diligence, they submitted the claim anyway with an outdated code.

In simple terms, 18 U.S.C. § 287 makes it illegal to submit a false claim – such as an invoice for medical services or equipment - to the government for payment.

It should be noted that most cases pursued under the False Claims Act involve a health care provider submitting bills for medical services or equipment that were not actually provided to a patient - or that were not medically necessary for that patient.

False claims cases can involve a wide variety of subject matter, but boil down to a simple concept:

False claims under 18 U.S.C. § 287 is a serious federal crime which carries a possible maximum punishment of five years in federal prison and/or a fine.

If you have been accused of violating 18 U.S.C. § 287 false claims act, there are possible defenses that could be raised to challenge the case.

Our federal criminal defense attorneys would need to first closely examine all the details in order to develop a strategy for best possible outcome.

Some common defenses include:

Lack of knowledge or intent to defraud

Even if it can be established that you were in fact not entitled to the money or services claimed against the United States by the defendant, there is still the issue of whether you might have had a reasonable good faith belief that you were entitled to payment.

In other words, we could make an argument you had no intent to defraud the government.

In some cases, we might be able to argue you were simply mistaken about the terms of a government contract or negligently presented a claim demanding more money than was actually owed.

These cases should not be prosecuted under Section 287 because you lacked fraudulent intent.

Other defenses, in an appropriate case, might include duress, entrapment, or government misconduct.

Where the government relies on an informant or other unreliable source during its investigation, evidence may also potentially be suppressed to undermine the government's case through a formal motion to suppress before the District Court.

The application of the Federal Sentencing Guidelines is particularly important in false claims cases as the advisory guideline sentencing range for a particular defendant will vary widely depending on the “loss amount,” i.e. the amount of money claimed against the United States.

Although there is some controversy in this area, the guidelines as currently written calculate the loss amount as the total amount of intended loss, rather than actual loss.

Accordingly, even if your claim for payment was flagged for possible fraud and never actually paid out, you can still be held criminally responsible for the total amount of the claim in the form of an enhanced offense level under the sentencing guidelines.

Note, however, that the maximum punishment allowable under the statute is five years in federal prison.

Even if the advisory guidelines, likely based on intended or actual loss, would exceed five years, the sentencing court would not have discretion to impose a sentence in excess of the congressionally mandated maximum of five years.

If you or a family member is under investigation or has been indicted in a false, fictitious, or fraudulent claims case under Title 18 of the United States Code, Section 287, our experienced federal criminal defense attorneys can assist you immediately.

In the prefiling stage of the case, we can negotiate a resolution with the government before indictment, thereby lowering the eventual punishment in most cases.

In the alternative, our experienced trial attorneys can litigate your matter in a federal jury trial to effectively communicate your innocence and attempt to obtain an acquittal.

Whether pre or post-filing, we encourage you to contact Eisner Gorin LLP for an initial consultation to determine which options will give you the best chance for a successful outcome in these serious federal criminal matters.