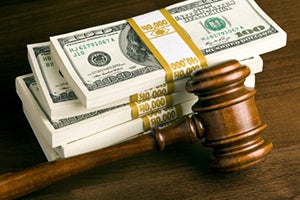 If convicted of domestic violence, you might be ordered to pay victim restitution defined under Penal Code 1203.97 PC.

If you are convicted of domestic violence in Los Angeles, you could face additional penalties above probation or jail time.

There are typically fines and court cost associated with probation, and failure to pay could lead to harsh penalties.

You might also be ordered to pay victim restitution described under California Penal Code 1203.097, and payment of this restitution to the victim is a mandatory requirement of probation.

In basic terms, restitution is compensation for the loss a victim suffered directly connected to your actions. In some domestic violence cases, you might have to pay restitution as part of your probation.

The victim is entitled to collect any out-of-pocket expenses incurred due to your conduct.

The restitution could partially or fully compensate a victim for their losses. It can cover direct losses, such as property that was damaged during the incident, or cover the cost of a victim forced to leave their home due to your actions.

Additionally, restitution could cover any cost of medical treatment or counseling for the victim.

Some common restitution payments include:

Restitution cost can be substantial, but it's possible for some relief based on your ability to pay.

Los Angeles criminal court judges will typically take into consideration your assets and earning capacity in order to determine your ability to pay.

However, it should be noted, you will have the burden of proof to show you can't make payments at the restitution hearing.

You should consult with a domestic violence lawyer for advice on what to expect while the court decides on your ability to pay.

When a prosecutor is dealing with a domestic violence incident, they have the job of seeking victim restitution.

If you are found guilty, or if the prosecutor has solid evidence against you, they will seek to work out a deal that you will have to agree as part of probation to pay restitution to any parties involved in the case.

Once victim restitution is requested, the judge will normally set a court date after your sentencing in order to deal with the claim.

The victim provides their restitution request to the prosecutor, who in turn will communicate with you or your criminal defense lawyer.

In some cases, your insurance might cover the requested restitution. It should be noted you can challenge the restitution amount by requesting a restitution hearing.

Your criminal defense lawyer will have an opportunity to cross-examine the victim and present evidence.

The judge will listen to the victim seeking restitution. The prosecutor will directly examine them on the witness stand and the judge can ask the victim any questions and also. Again, you lawyer can also ask questions.

The prosecutor will make arguments to the judge on what they believe restitution should be based on the evidence.

Your criminal lawyer will also make an argument for what they believe restitution should be based on evidence.

Next, the judge will make a decision on victim restitution and will order that amount of restitution be paid to the victim.

Restitution that is paid is supposed to be whatever the victim's out-of-pocket were due to what you did to them, but it's frequently slanted toward the victim. In other words, challenging victim restitution related to a domestic violence criminal filing is very difficult.

Your best chance is to let you lawyer deal with the issue by negotiating with the prosecutor to obtain the best possible outcome related to criminal restitution in a Los Angeles domestic violence case.

In the end, the judge determines what amount of restitution, if any, to award the victim.

Paying a victim domestic violence restitution is a required condition of probation. If you can't pay the full amount that was requested by the victim, the judge could make an order for you to make monthly payments to the victim.

The court might decide to hold an “ability to pay” hearing where you will be given an opportunity to present evidence about your current financial situation in order for the judge to make a determination on the exact amount of monthly payments.

This action has the potential to impact your credit rating.

If you willfully fail paying victim restitution, the judge has the option to issue a probation violation and impose more penalties.

If failing to pay restitution was not a willful act because you are not in a financial position to keep up with the monthly payments, it would not normally be considered a probation violation.

Other Costs for a Domestic Violence Conviction

Above and beyond paying victim restitution, the judge will probably order you to:

Again, it might be possible to negotiate an affordable payment plan based on ability to pay.  You will also have to cover the cost of probation.

It should be noted that victim restitution payments take priority over payments to a battered women's shelter.

In domestic cases where the victim is your spouse, the judge will order you not to use community money to pay for victim restitution.

For instance, if you have a separate bank account, you will be required to use the funds in that account to make payments to your spouse for victim restitution.

As you have read above, the consequences of conviction can be severe on your finances. There are numerous fees, fines, and other costs you might be ordered to pay by the court.

In many cases, it's difficult to demonstrate on your own an inability to pay to the court.

Our lawyers can assist you in navigating this portion of your case to give you the best chance of avoiding expensive costs.

Since paying victim restitution is part of your probation, it's important they are paid or face a violation, which could result in jail time.