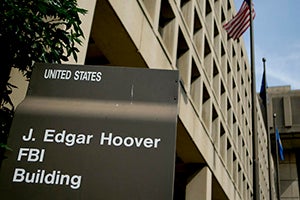 18 U.S.C. § 1001 makes it a felony crime make a “false statement” to an agent of the government related to a federal matter.

The three branches of the federal government of the United States - the legislative, executive, and judicial branches - frequently conduct hearings, inquiries, investigations, and other matters in which individuals, whether government employees or everyday citizens, make statements both orally and in writing.

When these individuals knowingly falsify statements, engage in a cover up, or attempt to perpetrate a fraud on the government through their false statements, they may be prosecuted for the federal crime of False Statements.

The false statements can be verbal or in writing and don't have to be made under oath to violate the statute.

The law applies in all types of situations, such as misrepresenting income to the IRS or lying to the FBI during an interview.

Federal prosecutors often use the False Statement Accountability Act to charge, or threaten to charge, anyone who doesn't fully cooperate with a government investigation.

What is a False Statement?

A “false statement” can be:

The person who makes the statement must do so “knowingly and willfully.” In other words, they must have intended to deceive the government agent.

Title 18 of the United States Code, Section 1001 does not, of course, create a federal crime in every instance of lying or making false or fraudulent statements.

The first requirement for applicability of 18 U.S.C. § 1001 is a jurisdictional one, that:

This second requirement excepts statements which, while false, are made in good faith or made accidentally.

18 U.S.C. § 1001 next defines the types of false statements which the statute covers. The first category is conduct which:

It therefore follows that facts which are not material - meaning tangential, not important to the outcome of the proceeding, etc. - even if provably false or covered-up, would not form the basis for a prosecution under 18 U.S.C. § 1001.

The second category is the making of any materially false, fictitious, or fraudulent statement or representation.

The word material appears again in this category to signify that minor, unimportant errors will not qualify for prosecution under Section 1001.

Finally, the third category covers the making or using of any false writing or document knowing that said document contains a materially false, fictitious, or fraudulent statement or entry.

This category essentially covers the same conduct as the second, only the statement in question is made in a written document rather than orally as in live testimony.

In order for a federal prosecutor to convict you of 18 U.S.C. § 1001 false statements, they must be able to prove – beyond reasonable doubt – the elements of the crime:

It should be noted the prosecutor must typically prove you were being intentionally dishonest. In other words, most federal criminal courts require the prosecutor to prove you knew it was unlawful to make a false statement when you made it.

The Department of Justice states that illegal false statements must be “knowingly and willingly.” Many defendants will testify they were not intentionally dishonest or they simply didn't know they were violating the law.

However, it's the jury who decides whether they believe you or the prosecutor's version of events.

A simply hypothetical will illustrate the coverage of Section 1001. Imagine the defendant is a witness in an administrative procedure before an executive branch agency. The defendant knows that his business stands to benefit tremendously if the agency takes a certain action with regard to its regulations.

Unfortunately for the defendant, he knows that he will be asked on the witness stand about an important fact related to his business, and that the agency is likely to deny the action he is hoping for once it learns of this important fact.

To ensure that he benefits financially, the defendant prepares a false ledger on his business' letterhead and has his lawyer submit it as an exhibit. When questioned under oath, the defendant knowingly lies and pretends that the exhibit contains true information.

The defendant could arguably be charged with two counts under 18 U.S.C. 1001 - one for submitting the knowingly false document and one for knowingly making a false statement orally in his testimony.

Section 1001 also contains several important exceptions. One exception is that 18 U.S.C. § 1001 does not apply to parties in judicial proceedings, or their attorneys.

This is not to say that knowingly presenting false information in a judicial proceeding is legal or will not result in criminal penalties. However, this conduct is covered by laws other than 18 U.S.C. § 1001.

Second, with respect to matters before the legislative branch, i.e. the Congress of the United States, the False Claims law applies only to administrative matters such as claims for payment, procurement, personnel and employment issues, etc. and, importantly, to investigations conducted by committees and subcommittees of the Congress or Senate.

Therefore, false claims made during Congressional testimony can potentially be prosecuted under 18 U.S.C. § 1001.

If you or a family member has been indicted for or is being investigated for, the federal crime of False Claims pursuant to 18 U.S.C. § 1001, contact our experienced federal criminal defense attorneys for a consultation.

Experienced counsel can intervene before court proceedings begin to minimize the chances of a filing or, if the matter will proceed to court, to negotiate the best possible resolution before the formal court process begins.

If a satisfactory resolution cannot be negotiated with the government, we can represent you or your loved one in a federal jury trial at which the government must prove its case beyond a reasonable doubt.

Eisner Gorin LLP is a top-rated criminal defense law firm with decades of combined experience and a track record of success.