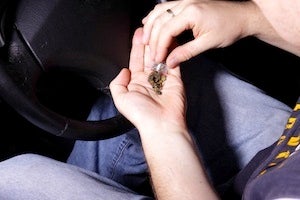 Vehicle Code 23152(f) VC describes the California crime of driving under the influence of drugs.

It is unlawful to drive while under the influence of a drug (DUID), whether illegal or by prescription. California law defines "drugs" as any substance other than alcohol that can affect your nervous system.

Being under the influence means that, as a result of consuming a drug, you are unable to drive with the caution of a sober driver.

Unlike alcohol, there is no per se limit of a drug that you can have in your system while driving.

That means that just having drugs in your system alone is not enough to convict you of DUI.

That being said, having a detectable amount of a psychoactive drug in your system is evidence that will be used against you, in the event that you are charged with a DUI.

Call a Los Angeles DUI lawyer at our law firm for more information.

It's important to remember that being under the influence of legal drugs, including prescriptions drugs and recently legalized marijuana, is still a violation of the Vehicle Code 23152(e).

If you have been accused of driving under the influence of drugs, call a Los Angeles DUI attorney at our law firm to review the specific details of your traffic stop and arrest in order to determine legal options.

A drug DUI investigation differs slightly from a DUI involving alcohol. While police officers will typically conduct the usual field sobriety tests, for a DUI involving drugs, they will follow it up a second series of tests, referred to as the Drug Recognition Examination or Drug Influence Evaluation.

The DREs, as they are referred to, often include a measurement of the driver's pulse, blood pressure, and pupils.

As with a DUI involving alcohol, unless you are on probation or under age, you are not obligated to participate in the tests.

However, if the police officer requests that you submit to a chemical test (usually the options are blood or urine), our Los Angeles DUI attorneys recommend that you agree to participate.

The punishment for refusing to submit to the chemical test, even if you are not suspected of a DUI involving alcohol, is a one-year mandatory hard suspension of your license.  That means no driving whatsoever for one year.

Typically, DUI drugs is a misdemeanor case that could include penalties of DUI probation for 3 to 5 years, fines, drivers license suspension, completion of a DUI school, and a possible jail sentence.

Driving under the influence of drugs can be filed as a felony case if it's your fourth or more DUI offense, have a prior felony DUI conviction, your driving resulted in an accident causing injury to another individual.

An experienced Los Angeles DUI lawyer from our law firm can use a variety of legal defenses to fight your DUI of drugs charges. They include:

Call a Los Angeles DUI Lawyer to Review Your Case

At Eisner Gorin LLP, a Los Angeles DUI attorney from our law firm will focus on getting your DUI drugs charges reduced or dismissed. Our law firm partners have argued DUI drug cases as both prosecutors and defense lawyers.

We understand where the problems of proof often lie in the prosecutor's DUI case against you. Our Los Angeles DUI lawyers will employ the most effective legal defense strategies in court to obtain the best possible outcome.

Our Los Angeles DUI attorneys have a track record of success defending our clients against driving under the influence of drugs. For example, in one case, our client was pulled over after he was observed driving with a burned out taillight.

The police officer smelled the strong odor of marijuana and our client admitted to smoking marijuana shortly before he drove. He was arrested and taken to the station where another officer performed the DREs. During the examination, our client stated that he was “really faded.”

However, the examining police officer formed the opinion that our client was not intoxicated based on his performance of the DREs. The Los Angeles district attorney's office filed charges anyway because our client's blood sample showed that he had a high level of THC in his system.

A Los Angeles DUI attorney from our office was able to convince the prosecutor that, without any evidence of bad driving (remember, he only had a burned out taillight) or poor performance of the DREs, his blood sample was irrelevant. They dismissed the charges entirely.

If you have been arrested for a DUI involving drug, call a skilled Los Angeles DUI lawyer at our office as soon as possible.

Our experienced criminal defense attorneys will evaluate the case and take immediate steps to ensure a beneficial resolution. Call our DUI defense law firm at 877-781-1570 for a free immediate response.