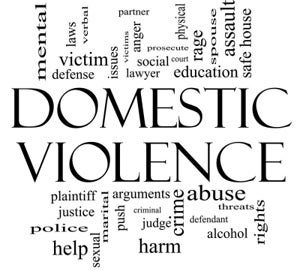 California has specific laws addressing spousal abuse and other forms of domestic violence against an intimate partner.

It is against California law to threaten, assault, or batter anyone – but when the person is your spouse, the penalties can be much more severe.

California has specific laws that address spousal abuse and other forms of domestic violence, such as those committed against domestic partners, formers spouses, people you used to date, a person with whom you have a child, or people who are closely related to you.

Importantly, spousal abuse does not have to involve physical violence.  Abuse can entail the following types of behaviors:

When law enforcement officers show up to the scene of a domestic battery or investigate claims of spousal abuse or corporal injury to a spouse, they are often in the unenviable position of having to sort out what happened and who the aggressor was in a particular situation.

In some cases, they choose to arrest one of the parties simply for the sake of expediency and to get the couple away from one another.

When this occurs, it can often result in the wrong party facing criminal action.

For example, if you were physically attacked by your spouse and broken his or her nose while you were trying to defend yourself, it may look like you were the aggressor to someone who arrived at the scene after the incident was over.

After all, if someone is bleeding profusely from their nose and the other person seems unscathed, it is only natural to assume that the person with the noticeable injury is the victim.

This is exactly the type of situation with can result in innocent people facing allegations of spousal abuse.

Fortunately, there are many potential ways that an attorney may be able to prevent you from being convicted.

Another common scenario in which an innocent person may be accused of spousal abuse is when a jealous or scorned partner makes a false allegation in order to get revenge.

Similarly, a spouse may level false allegations of spousal abuse in order to gain an advantage in a divorce or in a contested child custody dispute.

Because these are very serious allegations and often difficult to disprove without substantial evidence, it is critical for anyone who has been falsely accused of domestic violence to speak with an experienced lawyer as soon as he or she can.

If you are convicted of spousal abuse, you will be facing extremely serious legal penalties, including the following:

The severity of your sentence will depend on a number of factors, including your prior criminal history, the severity of the victim's injuries, and whether there were any mitigating factors.

Many judges will impose a 30-day jail sentence even for a first-time offense and also require you to attend a 52-week Batterer's Intervention program.

There are other potential consequences associated with a spousal abuse conviction that have nothing to do with the sentence imposed by the court.

If you are convicted, you will have a criminal record that will be accessible to anyone who wants to find it as part of the public record.

Employers may be hesitant to hire a person that has been convicted of a violent crime, and landlords may not want to rent to you.

Additionally, a conviction may have an effect on your immigration status if you are foreign national and may prevent you from being able to own a firearm.

Because of these potentially serious consequences, it is advisable for anyone facing allegations of spousal abuse to retain an attorney immediately.

If you have been accused of spousal abuse, you should call the Law Firm of Eisner Gorin LLP right away. In some cases, the early assistance of an attorney can prevent  a formal case from being issued at all.

Your future and your freedom could very well depend on retaining a lawyer who is familiar with defending people who have been accused of spousal abuse and other crimes related to domestic violence.

For a free immediate response with a member of our team, call our defense attorneys today at 877-781-1570 to review all the details of your case and learn how we can defend you.