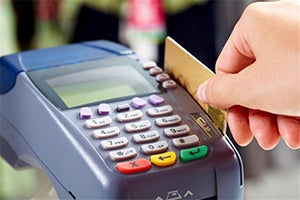 Penal Code 484g PC makes it a crime to use a credit card to obtain goods or services knowing the card is fake, forged, expired, or belongs to another person.

This statute covers using a stolen, fake, forged, altered, revoked or expired credit card to obtain cash or goods knowing the card was not valid.

If the total value of the items obtained through:

In other words, any person who intentionally uses an invalid credit card to get goods or cash, could facing prosecution under Penal Code 484g - which is commonly called fraudulent use of a credit card.

California has several separate statutes that deal with credit card fraud. Depending on the nature of the fraud, you could be charged under other related statutes, including Penal Code Section 484e, 484f, 484h, 484i and 484j.

As stated, PC 484g punishment varies based on the value of the items or services involved.

Legal penalties can range from a six months in jail and a $1,000 fine – up a maximum of up to three years in prison.  Restitution could be ordered by the court.

Examples of fraudulent use of a credit card

A common example of PC 484g fraudulent use of a credit card includes a situation where someone steals a credit card and attempts to purchase clothes at a mall.

Another example is when someone gets the credit card information from their roommate and then uses it to make several online purchases.

To give readers useful information about charges of fraudulent use of a credit card under Penal Code 484g, our California criminal defense attorneys are providing an overview below.

Definition of PC 484g Fraudulent Use of a Credit Card

California Penal Code 484g, known as fraudulent use of a credit card, is defined as follows:

This means you commit a crime under Penal Code 484g when you knowingly use a credit card for anything of value that is:

It should be noted that definition above means you are only guilty of PC 484g when you acted with an “intent to defraud” and it was “without the consent” of the cardholder.

The term “defraud” simply means you were acting fraudulently by attempting to gain something of benefit using deceit.

In order to be convicted of PC 484g fraudulent use of a credit card, the prosecutor must be able to prove – beyond reasonable doubt – specific elements of the crime.

The elements that must be proven include:

Penalties for PC 484g Fraudulent Use of a Credit Card

If convicted of a misdemeanor Penal Code 484g, meaning the value was less than $950, it's a petty theft. The penalties include:

If convicted of Penal Code 484g and the value of the items were greater than $950, it's a grand theft under Penal Code 487, which is a “wobbler.”

This means the prosecutor can charge the case as either a misdemeanor or felony offense.

If charged as a misdemeanor grand theft, you could receive:

If charged as a felony grand theft, you could receive:

There are also potential additional penalties based on your prior criminal record and other factors.

Fighting Fraudulent Use of a Credit Card Charges

Our Los Angeles criminal defense law firm can use a variety of strategies on your behalf to fight the charges of fraudulently using somebody's credit or debit card in violation of Penal Code 484g.

Every case is unique and will first require a close examination of the details of your case. We might be able to get the charges reduced to a lesser offense or even dismissed.

The common defenses for Penal Code 484g charges include:

Lack of intent to defraud

If you go back to the legal definition, you will see that you can only be found guilty of fraudulently using a credit or debit card if the act was with an intent to defraud. We might be able to make a reasonable argument that your actions had no intent to defraud. If we can cast doubt on this critical element, you might be able to avoid a conviction.

Consent from the Cardholder

Again, back in the definition, you are only guilty of fraudulently using a credit or debit card if you acted without consent from the cardholder.

Perhaps we could make an argument you had a reasonable belief you had permission to make purchases and it was a misunderstanding.

If you are under investigation or already charged with fraudulent use of a credit card in violation of California Penal Code 484g, you should discuss your legal options on fighting the charges with a Los Angeles criminal defense attorney at Eisner Gorin LLP.