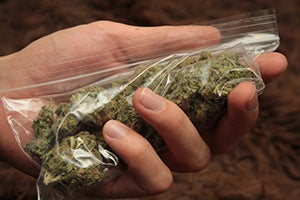 Health and Safety Code 11360 HS makes it a crime to sell, give away, import, or transport for sale, any amount of marijuana.

As readers will know, marijuana possession and use by adults was largely made legal recently by the California voters through Proposition 64.

There are, however, many exceptions to legalization and there is still a substantial amount of marijuana-related conduct which can subject a California resident to criminal prosecution.

While HS 11360 is colloquially known as the marijuana “sales” prohibition, the statute is actually broader than simply a ban on sales.

Under HS 11360, a defendant can be prosecuted for selling, giving away, importing into the state, or transporting for sale any amount of marijuana.

This includes marijuana concentrates such as hash oil and edible forms of marijuana such as brownies, gummies, etc.

Accordingly, even if an individual is distributing marijuana for purely charitable reasons with no expectation of making a profit, they can still be prosecuted for a violation of Health and Safety Code Section 11360's prohibition on marijuana sales.

There is a distinction between possession for sales of marijuana and actually selling it.

California Health and Safety 11360 could be prosecuted as a felony and punished by up to four years in county jail. If the sales are made to a minor, the punishment can increase to up to seven years in state prison.

However, it should be noted that most HS 11360 marijuana sales cases are now prosecuted as a misdemeanor crime.

What Must a Prosecutor Prove?

In order to be convicted of HS 11360, the prosecutor must be able to prove, beyond a reasonable doubt, the following elements of the crime, that a defendant:

For more information, see CALCRIM 2360, transporting or giving away marijuana not more than 28.5 grams.

CALCRIM 2361, transporting or giving away marijuana more than 28.5 grams.

CALCRIM 2352, possession for sale of marijuana.

CALCRIM 2363, offering to transport or give away marijuana.

Since Proposition 64 passed, most marijuana sales cases are handled as misdemeanors rather than felonies, as was more typical previously. A misdemeanor violation of Health and Safety Code Section 11360 carries the following penalties:

However, there are still a set of relatively common circumstances under which a marijuana sales case under Section 11360 can be prosecuted as a felony.

Also, a felony conviction will result in a lifetime ban on owning or possessing a firearm and a defendant is not eligible for a drug diversion program.

Several defenses are commonly asserted in both misdemeanor and felony-level prosecutions for marijuana sales under Section 11360.

Some are unique to marijuana offenses given the quasi-legal status of marijuana use and the medical marijuana regime prevalent in California.

For instance, the defendant can prove that they are a permitted caregiver who is allowed under state law to possess marijuana for sale to qualified patients. The defendant can also argue personal use rather than possession or transportation for sale as adults over 21 are legally permitted to use marijuana themselves without a permit or prescription, unlike most controlled substances in the state.

If this defense is asserted, the prosecution must prove their case by pointing to other indicia of sales such as the quantity of the marijuana possessed, the presence of large amounts of cash, the presence of drug sales paraphernalia such as baggies and scales, and other factors.

Because of the possessory nature of the crime, marijuana sales cases also often involve litigation over illegal searches and seizures. Everyone in the United States has a right to be free from unreasonable search and seizure by law enforcement of their person or property.

Where the evidence necessary to convict the defendant – in this case, marijuana – is seized by the police without a valid search warrant, the government must establish that one of the recognized exceptions to the warrant requirement applies.

If the defense successfully litigates a motion to suppress based on the warrantless search, the case will likely be dismissed.

If you or a family member is charged with unlawful marijuana sales in violation of California Health and Safety Code Section 11360, contact our team of experienced criminal defense attorneys for an initial consultation.

We can advise you on the steps to take, including before the case goes to court in a prefiling intervention, to protect your rights and secure the best possible outcome in your case.