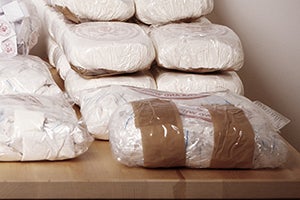 Health and Safety Code 11379.6 makes it a crime for someone to manufacture certain controlled substances.

The Crime of Drug Manufacturing in California - HS 11379.6

The felony drug crime of manufacturing a controlled substance is described under California Health and Safety Code 11379.6.

This statute makes it a crime for anyone who manufactures, converts, produces, processes, or prepares, either directly or indirectly, by a chemical extraction or using chemical synthesis, any controlled substance.

It also prohibits anyone to engage, or offer to engage, in any type of activity to the process of manufacturing an illegal substance.

It should be noted that the most common examples of drug manufacturing charges occur in a situation where someone is operating a methamphetamine lab, or when they mix chemicals to make narcotics.

It should also be noted that if you just “knowingly” participate in any part of the drug processing, you could be charged criminally under this statute.

Under HS 11379.6, a “controlled substance” includes a wide variety of substances, such as opiates, stimulants, and narcotics that are listed in Schedule II, III, IV and V of the Controlled Substance Act.

If you are convicted of the drug crime of manufacturing controlled substances under Health and Safety Code 11379.6, it's a felony crime that can result in up to seven years in jail, and a large fine.

The penalties will increase if you are convicted of manufacturing large quantities of a substance containing PCP or methamphetamines, or cause another person to sustain a great bodily injury or death.

To give readers a better understanding of drug manufacturing charges, our Los Angeles criminal defense attorneys are providing an overview below.

It should be noted the chemical extraction process can be done indirectly or directly.

The prosecutor doesn't have to prove you were able to actually complete the manufacture or production of a controlled substance, but only that you were involved in starting to produce the final illegal product. However, they must prove you knowingly contributed to the process.

You could also be convicted for just creating a “precursor” element used in later stages for the final controlled substance product.

This means you could be convicted for combing legal elements as long as you know they can aid in the creation of an illegal substance. Finally, you don't have to know exactly what substance you were using, only that it was illegal.

In order to be convicted of manufacturing controlled substances in violation of California Health and Safety Code 11379.6, the prosecutor has to be able to prove all the elements of the crime listed under CALCRIM 2330 Jury Instructions:

As stated above, it's crucial to note you can still violate California's law prohibiting manufacturing narcotics even if the manufacturing process is not completed. This type drug crime occurs once you knowingly participate in any of the steps to process a drug.

It should be noted the judge has the discretion to impose probation and county jail time, rather than a state prison.

If a child under 16 years old lived in the structure where the drug manufacturing occurred, it's an “aggravating factor” and you could receive additional time.

There are also other aggravating factors that result in a longer sentence. These include manufacturing large quantities of specific drugs, causing death or injury, and having certain prior drug-related convictions.

If you have been accused of Health and Safety Code 11379.6 manufacturing controlled substances, our Los Angeles criminal defense lawyers can use a range of strategies in an effort to obtain the best possible outcome on the case. The most common defenses include:

You didn't reach the stage to manufacture

We might be able to make an argument that you didn't actually reach the stage to manufacture, compound, convert, produce, or process any controlled substance. For example, perhaps you were in the early stages of preparing the manufacturing process, but don't have actual chemical materials, then you might be able to avoid a conviction.

In limited cases, we may be able to argue you didn't know the substances were a controlled substance. This could occur in a situation where you were told from someone else to manufacture substances, but were not aware of what exactly the substance was.

Drug diversion is an alternative sentencing option that will allow a nonviolent drug offender to receive drug treatment, rather than jail time.

If you have been accused of drug manufacturing in violation of California Health and Safety Code 11379.6, contact our Los Angeles criminal defense lawyers to review the case and options.

Eisner Gorin LLP is a top-rated criminal defense law firm with a record of success in all types of drug related crimes.