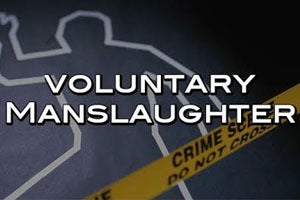 Penal Code 192(a) PC voluntary manslaughter is described as killing someone when your anger is provoked and they are killed in a confrontation.

Voluntary manslaughter charges are covered under California Penal Code Section 192(a). Basically, it's the killing another person when your anger or emotion is provoked and they are killed in a confrontation.

PC 192(a) provides a explanation in that you could be convicted of voluntary manslaughter if a death of another person was the spontaneously result during a sudden quarrel or in the heat of passion, and you conduct was the result of adequate provocation.

In order for provocation to be considered “adequate,” it has to be determined that other reasonable people, who are in the same situation, would have reacted in a similar manner.

Typically, voluntary manslaughter charges are a lesser offense to murder charges and often an option to be considered by a jury in a murder trial.

Rather, violating Penal Code Section 192(a) will often become part of negotiations in murder cases where the defendant freely admits to killing the victim, but their criminal lawyer is attempting to get their charges reduced to manslaughter.

The difference between voluntary manslaughter law and murder law is whether you acted with "malice aforethought,” meaning if you had intent to kill or a wanton disregard for human life.

When a person is killed in the heat of passion, it's normally presumed it was done without malice and the main reason for the lesser charge of voluntary manslaughter.

In other words, there was no time for you to have thought about your actions and you simply just acted, unintentionally and without stopping to plan the killing.

A common example of voluntary manslaughter in Los Angles County includes a domestic violence situation where husband and wife become involved in a heated argument.

As they start physically fighting, the wife pushes him backwards, causing him to stumble and fall down the stairs, striking his head on the way down.

As a result of his injuries, he ends up dying. The wife could be convicted of voluntary manslaughter because she caused his death by pushing him down the stairs.

If you are convicted of voluntary manslaughter, you could face a maximum sentence of 11 years in a California state prison.

The legal consequences are harsh and life-altering. If you have been accused of voluntary manslaughter, you will need an experienced Los Angeles criminal defense lawyer at Eisner Gorin LLP to protect your future.

Let's examine the legal definitions, penalties, and legal defenses below.

Under California Penal Code Section 192(a), voluntary manslaughter is legally defined as follows:

It's important to note what qualifies as a “sudden quarrel.” It means you killed another person suddenly during a quarrel after you were provoked.

As a consequence of being provoked, you acted harshly as you were under high emotions that prevented you from using reasonable judgment.

It also means that the provocation would have caused another reasonable person to also act harshly in a similar situation.

Under PC 192(a), “heat of passion” simply means intense emotions that caused you to act in an impulsive manner.

It's also important to note here that if the prosecutor can prove there was sufficient time between when you were actually provoked and the actual killing, you could face murder charges under California Penal Code section 187.

What qualifies as sufficient “provocation?” While there is no established legal definition under California law, it typically requires that the provocation is sufficient enough to cause a normal person, under the same situation, to react in an emotional manner.

Since there is no clear standard, it's another reason why you need an experienced criminal defense lawyer if you are facing allegations of voluntary manslaughter.

If you are convicted of voluntary manslaughter, in violation of California Penal Code Section 192(a), you are guilty of a felony offense. The legal penalties include:

The legal penalties could increase if there are gang allegations, prior strike conviction, or if a firearm was used in the commission of the crime.

A voluntary manslaughter conviction could result in a “strike” on your record under California's Three Strike Law.

Additionally, since it's a felony conviction, you could lose you right to own or possess a firearm, under California Penal Code Section 29800, which is the felon with a firearm law.

Our Los Angeles criminal lawyers can use a variety of legal strategies to defend you against charges of voluntary manslaughter. We understand that every case is unique and requires a thorough review of all the specific details to build an effective strategy.

However, some of the most common legal defenses include:

Self Defense – In some cases, our lawyers may be able to present a successful self defense argument. For example, an imperfect self-defense argument means you made a mistake in judgment by using a deadly weapon in a situation where you should have not, or you believed you needed to defend yourself or another person, when you shouldn't have.

In other words, you believed you were in imminent danger and had to use deadly force, but your belief was not reasonable (See People v. Flannel).

This argument is typically used to negotiate a reduced charge of murder to voluntary manslaughter where your belief to use deadly force was wrong, or that your belief you were in danger was a mistake.

This legal defense does not justify the killing, but your sentence could  be mitigated to a lesser sentence.

This means there are some specific circumstances where the self defense law would essentially excuse of justify your actions.

Accident – In some cases, our criminal attorneys may be able to present an argument the killing was an accident.

However, we would need to be able to present evidence you had no intent to harm the victim, were not acting in a negligent manner at the time of the accident, and were acting in a lawful manner with the accidental killing occurred.

However, pleading insanity would expose you to close observation by the state in a mental institution and you would be subjected to a release only when you are considered no longer insane.

Under California laws, there are several criminal offenses that are related to voluntary manslaughter. These include:

I was lucky to find Dmitry Gorin at the criminal defense law firm of Eisner Gorin LLP. His entire staff was very helpful, friendly, and genuinely cared about the outcome of case. After our initial meeting in his office, he provided legal guidance by informing me of what steps to follow. His advice proved to be very effective.

Dmitry was extremely knowledgeable about my type of criminal case and knew exactly how it would play out within the scope of the law as well as realistic scenarios that could happen. I highly recommend the law firm Eisner Gorin LLP if you are seeking great legal representation definitely see him. -R.M.

If you or a family member are facing voluntary manslaughter charges in violation of California Penal Code Section 192(a), you should consult with a Los Angeles criminal defense attorney at Eisner Gorin LLP immediately.

We will aggressively pursue the best possible outcome on your case.

We are skilled courtroom negotiators and may be able to get your charges reduced or dismissed.