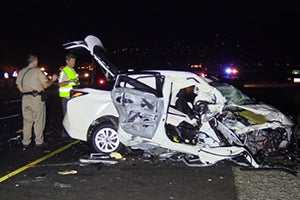 A Watson murder in California law is a second-degree murder charge where someone dies as a result of another driver's intoxicated driving.

A Watson murder under California law is a form of second-degree murder which is charged in cases where someone dies as a result of another driver's intoxicated driving.

The name Watson comes from a California appellate decision People v. Watson which confirmed that a DUI defendant acting with implied malice can properly be charged with murder.

Based on the court's ruling, you could be charged with murder if you drive while under the influence of drugs or alcohol and a somebody is killed as a result of your conduct.

The Watson murder rule allows the prosecution to charge this crime, which is normally charged as a vehicular manslaughter while intoxicated, as second-degree murder under California Penal Code 187.

Again, the intoxicant can be either drugs, alcohol, or a combination of the two.

The critical question in Watson murder cases is whether or not the intoxicated driver acted with implied malice.

In order to convict you, the prosecution has to prove you committed an act causing the death of another person, had a state of mind called malice aforethought, and killed without lawful justification.

Malice aforethought can be either express or implied and prosecutors will rely on evidence showing you exhibited implied malice.

To give readers a better understanding of the Watson Murder, our California criminal defense attorneys are providing an overview below.

What is Implied Malice in DUI Murder?

Implied malice is a legal term defining a mental state less than actual intent to kill but still blameworthy enough that a murder charge may be sustained.

As you can see, the standards for implied malice all go to the defendant's knowledge and mindset at the time of the conduct.

As such, they will rarely if ever be the subject of direct evidence, i.e. a defendant announcing in advance that they had a reckless disregard for the value of human life.

Rather, like most mental states in criminal cases, the prosecution will seek to prove through circumstantial evidence that the defendant possessed the mental state required to be guilty of murder.

In some cases, it's difficult for a prosecutor to prove the defendant acted with a conscious disregard for human life.

If they are unable to prove this, a California DUI resulting in the death of another person will normally be charged as either:

Penalties for DUI Murder in California

Watson murder, even though related to driving under the influence, carries the same penalties as other second to degree murders.

If found guilty, the defendant can receive 15 years to life in the California state prison and a $10,000 fine. A second-degree Watson Murder is considered a serious felony and a conviction will be a “strike” under California's three-strikes law.

You also face an additional sentence of 3 to 6 six years in a California state prison if any of the surviving victims sustained a great bodily injury, which is described as a significant injury.

You could also receive additional year for each person who sustained less serious injuries.

The common defenses to a Watson murder charge track to some degree those commonly asserted in other driving under the influence cases.

The defendant may argue that there is insufficient evidence of their intoxication with drugs, alcohol, or both.

This can be accomplished by challenging the science of blood alcohol concentration testing or the maintenance or calibration of the blood alcohol testing device utilized by law enforcement.

The defendant may also argue that the traffic collision which resulted in the victim's death was not in fact caused by the defendant.

Even if the defendant was under the influence, a true accident caused by someone other than the defendant should not result in a charge of Watson murder.

The defendant will also want to challenge the prosecution's evidence of implied malice, such as they were not given a Watson admonition in connection with a prior DUI and they had no specialized knowledge of the serious risk of driving under the influence.

To ease the prosecution's burden in proving implied malice in cases of repeat DUI offenders, the courts have made it a universal practice to give a “Watson admonition” to defendants pleading guilty or no contest (or being sentenced after a jury trial) to a driving under the influence offense.

At the time of plea and sentencing, the Court will admonish the defendant that driving under the influence of alcohol, drugs, or both is inherently dangerous to human life and that it is extremely dangerous to do so.

The Court will further explicitly admonish the defendant that if they continue to drive under the influence of alcohol, drugs, or both and someone is killed as a result of their driving, the defendant will be charged with murder.

Aside from this being accurate and practical advice, the legal purpose of the Watson admonition is to defeat any argument by the defendant in a subsequent Watson murder trial that the defendant was unaware of the danger posed by drunk driving in an attempt to challenge the implied malice evidence of the prosecution.

This is one of the reasons why Watson murder charges are almost always brought in the case of a repeat DUI offender rather than a defendant with no DUI history prior to the incident which resulted in death.

It should be noted that a prosecutor is more likely to charge a defendant with Watson murder when they had a very high blood alcohol content (BAC), had multiple prior convictions for driving under the influence, engaged in extreme reckless driving, such as excessive speed or felony reckless evading of a peace officer.

Watson murder is a serious California felony. If you or a family member was involved in a DUI incident resulting in death, effective representation before court by an experienced criminal defense attorney is crucial to achieving the best possible outcome.

A prefiling intervention can result in reduction or outright rejection of charges regardless of the initial charge of arrest.

We need to first closely examine all the details on order to determine the appropriate strategy.