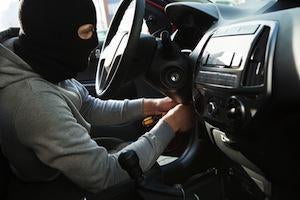 Vehicle Code 10851 VC "joyriding" makes it a crime to drive or take someone else’s vehicle without their consent.

In legal language, joyriding is the unlawful taking another person's vehicle car when you don't have permission from the owner. In simple terms, it's basically driving around in a stolen vehicle without any particular goal in mind.

Joyriding is a theft crime and covered under California Vehicle Code 10851.

The primary difference is that the person who is joyriding does not typically intend on permanently keeping possession of the vehicle.

In other words, the difference between the two crimes normally depends on how long you intended to keep the vehicle you unlawfully took. Regardless, it's still a theft offense in California punishable by law.

It's important to note that even if you are only a passenger in the vehicle, you can still face criminal charges of joyriding.

The Los Angeles County prosecutor is not legally required to prove that you had a specific intent to steal the vehicle. In the vast majority of cases, joyriding is typically committed by male juvenile offenders.

Normally, these juvenile offenders take the vehicle because they think its fun, exciting, and it will give them some sort of a status symbol among their peers.

However, many juvenile offenders commit a joyriding offense in a reckless and often dangerous manner that creates a substantial threat to public safety.

In some cases, joyriding has lead to car accidents causing serious injuries or property damages. In California, Joyriding is known as “wobbler” offense.

This means the prosecutor can charge the crime as either a misdemeanor or a felony case.

A simple misdemeanor conviction could carry a one year sentence in the county jail, and a fine up to $5,000.

If you have been accused of joyriding, you need to consult with a Los Angeles criminal defense lawyer at Eisner Gorin LLP.

When a joyriding defendant is a minor, the Los Angeles County Juvenile Court will typically have jurisdiction over the case.

Under the juvenile court system, there are several offenses that could be considered a delinquent act, rather than criminal offense.

When making a final decision on how to specifically charge an offense, the juvenile court will normally take into consideration:

With an experienced criminal lawyer on your side, you are increasing the chances at the best possible outcome of your case.

The legal penalties for joyriding could include community service, counseling, house arrest, detention, and a suspension of your driver's license.

Therefore, if your child has been accused of a joyriding, call our law firm to review the case. Now that we have covered a basic overview of a joyriding offense, let's take a closer look at some legal definitions below. See related information: Juvenile Crimes.

What is the Legal Definition of Joyriding?

Under California Vehicle Code 10851, the legal definition of the crime of joyriding is defined as follows:

It's important to note that “taking” a vehicle means you moved the vehicle at all, no matter how far. It doesn't matter how long you had the vehicle.

If you deprived the owner of possession of the vehicle for any amount of time, it can be considered a joyriding offense.

As stated above, it is also not a requirement that you had intent to steal the vehicle. Call a Los Angeles criminal defense attorney at our office for additional information.

Elements of a Joyriding Crime

In order for the Los Angeles County prosecutor to convict you of joyriding, they must be able prove, beyond any reasonable doubt, the following elements of the crime:

Again, it's important to remember that if you had intent to permanently keep the vehicle, or kept it for a substantial period of time, you will most likely face criminal charges of grand theft auto under California Penal Code Section 487(d)(1).

As stated above, joyriding is a “wobbler” offense, meaning the prosecutor has the discretion to charge you with either a misdemeanor or felony crime.

If you convicted of joyriding as a misdemeanor offense, under California Vehicle Code 10851, the legal penalties include up to one year in county jail, a fine up to $5,000, or both jail and a fine.

If you are convicted of joyriding as a felony offense, the legal penalties include 16 months, 2 years, or 3 years in county jail, a fine up to $10,000, or both jail and a fine.

If you are convicted of joyriding in an ambulance, police vehicle, or disabled placard vehicle, it's a felony crime punishable by 2, 3, or 4 years in county jail, and a fine up to $10,000.

A Los Angeles criminal lawyer at our law firm could use a wide range of defense strategies on your behalf to obtain the best possible outcome in your joyriding case. These potential legal defenses include:

Consent – In some cases, our criminal attorneys might be able to present a successful argument you had specific permission to borrow their vehicle.

One of the elements of the crime a prosecutor must prove to obtain a joyriding conviction is that you did not have permission to take the vehicle. If we can reasonably show you might have believed permission was granted, you can't be convicted of joyriding.

Ownership of vehicle – In some cases, our criminal lawyers might be able to show you had a reasonable belief the vehicle belonged to you.

For example, you might have believed you owned the vehicle as you shared it with your spouse or with a business partner. If we can cast doubt that you took a car without consent of the owner, then you will most likely avoid a conviction for joyriding.

In many cases, joyriding by teenagers might seem like a harmless activity. However, the legal penalties for a joyriding conviction can impact a lifetime for someone arrested as a minor.

If your child has been arrested for taking a joyride, it's important to contact a Los Angeles criminal defense lawyer at Eisner Gorin LLP.

We have a thorough understanding of the laws and will aggressively fight to obtain the best possible outcome.

Our lawyers have decades of combined experience, including years in the Los Angeles District Attorney's Office.

Our knowledge of police tactics and prosecutor negotiations, gives us a significant advantage for our clients. We offer a free immediate response.