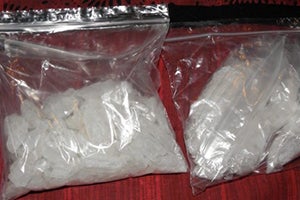 Health and Safety Code 11379 HS makes it a felony crime to sell or transport for sale methamphetamine.

The serious felony charge of sale or transportation for sale of methamphetamine under California law is found in Health and Safety Code § 11379. If convicted, you are not eligible for drug diversion instead of jail time.

This type of drug crime is commonly charged when a someone found driving in their vehicle with methamphetamine and believed to be in possession for possessed for sale.

It should also be noted that a prosecution for Section 11379 can be based on sale or transportation of other substances besides methamphetamine.

Specifically, the same subsection criminalizes conduct related to “date rape” drugs such as GHB and Ketamine, as well as certain anabolic steroids.

The majority of prosecutions under this subsection, however, relate to sales or transportation of methamphetamine, a controlled substance which is unlawful to possess in almost all circumstances.

To give readers a good understanding of HS 11379 transporting or selling methamphetamine laws, our California criminal defense lawyers are providing an overview below.

Health and Safety Code § 11379 defines the crime of sale or transportation for sale of methamphetamine as:

In other words, HS 11379 criminalizes any of the following acts:

Interestingly, Section 11379 also criminalizes giving away, i.e. “furnishing,” methamphetamine to another person even if no money changes hands.

Offering to commit any of these crimes or attempting to commit them, even if unsuccessful, is equally chargeable under Section 11379.

Finally, it should be noted that a “usable amount,” of methamphetamine is an element of the crime which must be proven to sustain a Health and Safety Code § 11379 conviction.

For that reason, tiny amounts of residue which might be found on someone's person, even combined with other indicia of sales such as large amounts of cash, baggies, scales, etc. should not form the basis for a felony prosecution under this section.

Penalties for Selling or Transporting Meth

The available penalties for a violation of Health and Safety Code § 11379, which is always a felony under California law, can vary dramatically depending on the applicability of certain enhancement provisions.

The base offense of selling or transporting methamphetamine is punishable by two, three, or four years in California state prison, a $10,000 fine, or both.

However, if the prosecution can establish that you transported the methamphetamine in question across at least two county lines, the possible prison sentence is increased to three, six, or nine years. A further one year sentencing enhancement applies if the sales activity occurred within 1000 yards of a drug treatment center, detox facility, or homeless shelter.

If a minor is involved in the sales activity – either as a mule, a lookout, or in any other fashion – an additional sentence of three, six, or nine years can be imposed.

Perhaps most significantly, sales involving large quantities of methamphetamine – over one kilogram – can result in enhanced prison sentences of as much as 15 years.

It should be noted that Section 11379 is a straight felony, not a “wobbler,” and cannot be reduced therefore to a misdemeanor.

Drug diversion or deferred entry of judgment are also typically not available for these crimes.

Pretrial negotiation by your criminal defense lawyer is therefore critical to try to reduce the offense, even if still a felony, to a crime which can later be reduced to a misdemeanor or be subject to a diversionary program.

As with many possessory crimes, a common defense is that you were not in knowing possession.

For example, it might be reasonable to make an argument that the methamphetamine seized belonged to someone else and you were unaware of its presence.

Even if the you were clearly in possession, it might be in doubt whether or not your purpose was personal use or sales. Again, indicia of sales activity beyond the drug's presence itself is critical.

The presence of large amounts of cash, firearms, baggies, scales, and other paraphernalia associated with the drug trade also corroborate the allegation that the defendant possessed or transported the methamphetamine for sale.

If you or a family member is being investigated or charged with the serious California felony offense of sales or transportation of methamphetamine in violation of Health and Safety Code § 11379, contact our experienced criminal defense attorneys for an initial consultation.

We can advise you of the steps to take to protect your rights, challenge any unlawful search and seizure leading to your arrest, and intervene before court to maximize your chances of a positive outcome.