In California, when the police come to your door to execute a warrant, they must knock first, announce their presence and purpose, and wait a reasonable amount of time before choosing to enter the premises by force.

This is what is commonly called the knock-and-announce rule. The rule does not interfere with the police's ability to conduct an effective investigation. If police violate this rule, any evidence the police obtain from their search may be declared inadmissible in court. 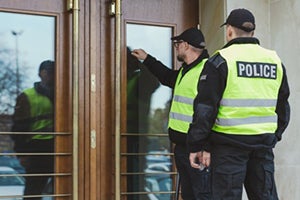 The knock and announce rules requires police to announce their presence before executing a warrant.

This rule is designed to keep police from barging into homes unannounced. It acknowledges the legal right of people to know when police are entering their homes.

After the door has been opened, police must tell the occupant they possess a search warrant or an arrest warrant. This must be done before they enter. Police can't forcibly enter unless they are refused entry or a reasonable amount of time has passed, which is discussed in greater detail below.

There are some exceptions to the rule under California's search and seizure laws, such as the consent of a resident and executing the warrant in a public place. Our California criminal defense lawyers will look more closely at the knock-and-announce rule and how it protects you as a possible defendant.

Overview of Knock and Announce

Police don't need to knock and announce if there are exigent circumstances, such as situations where evidence could be destroyed, if it gives residents time to arm themselves, or suspect is fleeing the scene.

When Can the Police Enter Forcibly?

As noted, the police may enter your premises forcibly ONLY after knocking and announcing in the following circumstances:

The amount of time considered a "reasonable amount" is ambiguous, but it is generally decided based on the circumstances. For example, if the police are executing the warrant in the middle of the night, a longer wait time may be expected than if they were coming during daylight hours.

Likewise, if it is a larger building, they must allow someone to move from one part of the building to the other. Thus, the courts consider several factors in considering a reasonable amount of time, such as:

What Are the Exceptions to the Rule?

Police are generally allowed to bypass the knock and announce rule in any of the following general situations:

What Happens if Police Violate the Knock and Announce Rule?

If law enforcement does not adhere to the knock and announce rule, and if none of the exceptions apply, any evidence they find during their search may be rendered inadmissible in court.

This means that even if the police have a warrant, if they did not knock and announce before entering, anything they find during their searches—such as weapons, drugs, or stolen property—could not be used against you in a criminal trial.

As you can probably tell by the exceptions named above and by ambiguous terms such as "reasonable amount of time," knock and announce is not a hard and steadfast rule.

Could My Charges Be Dismissed over a Violation?

Not necessarily. Actual violations of the knock and announce rule only mean that the evidence collected during the search cannot be admitted as evidence; it does not negate your charges. 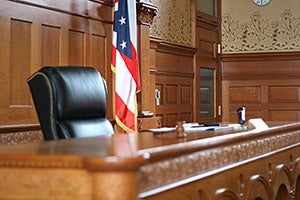 If the knock and announce rule was violated, then the evidence collected can't be used in court.

However, if the only evidence prosecutors have against you is evidence obtained in an illegal search (e.g., by a knock-and-announce violation), there's a more substantial chance your charges will be dropped.

Readers should note that just because law enforcement obtained a search warrant doesn't always mean it was valid. You have a legal right against unreasonable searches and seizures regarding warrants.

Perhaps we can prove the warrant lacked sufficient probable cause or was too broad to describe where police were allowed to search.  We will closely review the details to determine a strategy for the best possible outcome. Eisner Gorin LLP is based in Los Angeles, California. Contact us at (310) 328-3776 for an initial consultation or use the contact form.

Related Content: What's the Difference Between Arrest and Bench Warrants?