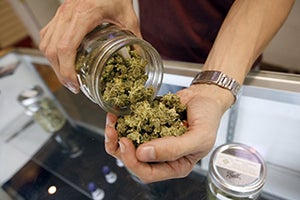 Health and Safety Code 11361 HS makes it a crime for adults to sell, give, offer, or induce minor to use marijuana.

California Health and Safety Code Section 11361 addresses marijuana sales to minors. In fact, while this is typically referred to as a sales provision, no money need change hands to complete a violation of Section 11361.

Giving away, furnishing, trading or bartering for, or in any other way providing marijuana is equally unlawful as it is to sell it when the recipient is a minor, meaning a person under the age of 18.

Under California Health and Safety Code 11361, it's a crime for any adult to:

As you can see, HS 11361 contains different categories of prohibited conduct. In simple terms, it's a crime to get a minor involved in the marijuana business, such as selling or transporting the drug. This includes carrying, preparing, or promoting marijuana for sale.

It's also a crime to provide marijuana to a minor for their personal use, such as selling, offering to sell, or giving a minor marijuana.

Health and Safety Code 11361 also makes it a crime to induce a minor to use marijuana, such as encouraging, coercing, intimidating, or any other ways of persuasion.

The legality of marijuana in California has evolved substantially over time.

Most recently, Proposition 64 legalized recreational use of marijuana by adults aged 21 or older. However, minors are still prohibited from using or possessing marijuana in any form, whether flower, edible, vape, hash, hash oil, or other.

To give readers more useful information about the drug crime of selling or giving marijuana to minors, our California criminal defense attorneys are providing a detailed review below.

California Health and Safety Code 11361 addresses situations in which an adult – someone over 18 – sells, gives, away, etc. marijuana to a minor – someone under 18.

A second category of conduct which is covered by Health and Safety Code Section 11361 is the using of minors as agents to sell or transport marijuana.

In some cases, drug dealers will use a minor as a drug “mule,” with the idea that the minor will be subject to less severe consequences if caught, while avoiding having to take the risk of transporting or selling the marijuana themselves.

To address this conduct, HS 11361 makes it unlawful to hire, employ, or in any way use a minor in the course of transporting, selling, giving away, furnishing, or transferring marijuana.

In order to be convicted of HS 11361 selling or giving marijuana to a minor, the prosecutor must be able to prove all the elements of the crime, beyond any reasonable doubt, including a defendant:

For more information, see CALCRIM 2391, offering to sell, or furnish marijuana to a minor.

CALCRIM 2392, employment of a minor to sell marijuana.

CALCRIM 2393, inducing a minor to use marijuana.

Selling marijuana to a minor is always a felony under California law. It is not a “wobbler,” meaning it cannot be reduced to a misdemeanor in either the prefiling or court stage.

The penalties associated with a conviction under Section 11361 depend on the age of the minor to whom marijuana is sold, given away, or furnished.

If the victim was 14 or older, the penalties include three, four, or five years in California state prison plus fines and fees.

If the victim was under 14 years old, these penalties increase to three, five, or seven years in California state prison plus fines and fees.

Several defenses apply in a prosecution for selling marijuana to minors which are related to the age requirement of the statute.

Reasonable belief minor was an adult

Since the legalization of some marijuana sales between individuals, such as through recreational marijuana laws and medical marijuana laws, many readers might assume that a defendant's reasonable mistake of fact as to the victim's age should be a defense.

For instance, if a marijuana shop owner checks a customer's driver's license, which appears to be legitimate, and it shows that the customer is 21 years old, one might assume that the shop owner should not be held criminally liable under HS 11361 if it turns out the ID is fake and the customer was 17 years old.

In that scenario there will be a substantial question of fact as to how reasonable the precautions the business owner took were in light of the prevalence of fake IDs.

Leaving that aside, it is currently not a complete defense under HS 11361 to establish that the defendant reasonably believed that the minor to whom they sold marijuana was over 18 years old.

Whether a prosecution actually proceeds in a scenario like the one described above is a matter of prosecutorial discretion.

Lack of Intent and Illegal Search

Other defenses which might be asserted in a prosecution under HS 11361 include false identification, reasonable doubt that the defendant intended to sell or furnish marijuana, or illegal search and seizure by law enforcement.

If the evidence against the defendant was obtained through a warrantless search without the presence of a well-established exception to the warrant requirement under the Fourth Amendment to the United States Constitution, the court will grant a motion to suppress which may result in dismissal of the charges.

As we have seen, despite the widespread commerce in marijuana and use of marijuana by individuals in California and the substantial liberalization of marijuana laws more generally,

California continues to provide for serious felony penalties for individuals who sell, furnish, give away, or otherwise provide marijuana to minors, particularly when they do so to facilitate drug trafficking.

If you or a family member is under investigation for, have been arrested for, or have been charged with marijuana sales to minors in violation of California Health and Safety Code Section 11361, contact our experienced team of Los Angeles criminal defense attorneys for an initial consultation.

We can help you maximize the chances of a positive outcome in your case while protecting your rights with law enforcement and the prosecuting agencies.

Eisner Gorin LLP are a team of highly experienced criminal defense lawyers with a record of success.