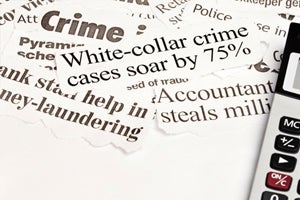 Although it is common to think that crime is mostly violent, there are non-violent types of crime that people commit.

Nonviolent types of crime are commonly known as white collar crimes, and are usually committed by people who are in a special position of power to commit such crimes.

White collar crimes in Los Angeles County may be charged by both California state and Federal government.

Consequently, in California white collar crimes are prosecuted by the Federal Government, the District Attorney's Office, and the local prosecutor's office.

However, in the past several years, California state has paid special attention to white collar crimes being committed and has come down on such crimes with great force.

If you are under criminal investigation, you should contact a Los Angeles white collar crime attorney at our law firm to review your case and discuss your legal options.

We have a record of success and know how to develop an effective defense strategy against any type of fraud related crime. We can help you decide whether to accept a plea bargain in your case. We understand the most common defenses in California criminal cases.

Although white collar crimes in Los Angeles are charged just like any other crimes and trigger the same types of legal defenses and protections as in other cases, the legal principles and theories of white collar crimes are much more complex due to the amount of evidence presented in the case.

Many times suspects accused of white collar crimes will be subpoenaed to testify in front of a grand jury.

However, usually, prosecution's case relies mostly on what is said in suspect's or witnesses' statements, or what can be recovered from gathered documents.

Therefore, it is overly important to consult with experienced Los Angeles white collar crime lawyers, knowledgeable in these type of crimes; so, as to be advised regarding your constitutional rights and the consequences of white collar crimes allegations.

The white collar defense attorneys at Eisner, Gorin LLP have the experience and will do their best to fight for your rights and do everything possible in their power to reach the best outcome in your case.

For the crime of embezzlement in Los Angeles, the elements are:

Embezzlement cases often occur in employment contexts in which an employee, for example, is entrusted with a company's credit card but then uses that credit card for his or her own personal expenses. Federal embezzlement laws target theft from the federal government.

Also, federal laws cover theft of property that is owned by a private entity but, pursuant to a contract, the government has paid for it.

For example, accounting employee taking money from a federal scholarship fund; could be charged with embezzlement under federal laws.  Speak with your Los Angeles while collar crime defense lawyer to review the details of your case.

Available defenses always depend on the facts of the case. It can be argued by an experienced Los Angeles white collar crime defense attorney that you had a good reason to believe that you were entitled to use the other person's property or money as used.

For example, if you had a company credit card and thought you could use it to purchase a new laptop computer, but in fact did not have the authorization for that purchase, that would still not qualify as embezzlement.

A defense lawyer can also argue that you did not have the intent to permanently deprive the other person of their property. An attorney could even argue the police arrested the wrong person.

For the crime of extortion in Los Angeles, the elements are:

Penal Code 518 lists what type of threats can qualify for fear-induced extortion:

Extortion cases often involve a threat of either physical violence or a threat to ruin a person's reputation by disclosing a secret unless the other person pays the extortioner off.

One case could involve a person who tells a cheating spouse that the other spouse will be informed of the affair if the cheating spouse does not pay up. See related: Bribery of a Witness Laws in California.

Extortion is a felony criminal offense. The maximum penalty is four years incarceration. Available defenses by our Los Angeles white collar crime lawyers always depend on the facts of the case.

A defense attorney can argue that you never made such a threat or that you did not have the actual intent for the other person to give up his or her property.

For the crime of Health Care Fraud in California, the elements are:

If the amount involved in the fraud was over $950, this can be a misdemeanor or felony crime.

If it is a misdemeanor, it carries a maximum penalty of one year in county jail and up to a $10,000 fine, or both.

If the amount involved in the fraud was less than $950, it is always a misdemeanor and has a maximum penalty of six months in County jail, or a $1,000, or both, although that fine can increase if there are multiple charges.

There are a couple main ways of attacking a health care fraud case by a Los Angeles white collar defense lawyer at our law firm.

If, for example, you incorrectly filled out a document that you submitted to an insurance company, you did not know at the time the document was fraudulent and you did not have the specific intent to defraud.

If you submitted claims to multiple insurance companies, that fact alone does not demonstrate that you intended to defraud them if you just believed that you were following procedure.

There has been a significant increase in Medical insurance fraud prosecutions of physicians. In many cases Medi-Cal fraud and Denti-Cal insurance fraud resulted in prison terms for doctors and dentists who have been convicted of these crimes.

Chiropractors have also been targeted for prosecution resulting from allegations of false or misleading billing.

These crimes are prosecuted by the United States Attorney's Office, the District Attorney's Office and the Attorney General's Office.  Such prosecutions usually begin when a search warrant is issued for documents from the professional offices of the doctor, dentist or chiropractor.

Therefore, it is important to talk to an experienced Los Angeles white collar crime attorney right away who knows how to defend medical fraud charges.

Or it could arise from claiming to insurance that a laptop was stolen from your vehicle, when in fact no such event occurred.

This is a felony offense that carries a maximum penalty of five years incarceration and up to $50,000 in fines, or twice the amount of the fraud, whichever amount is higher.

There are some legal defenses to attack a case of insurance fraud by a Los Angeles white collar crime defense attorney.  A lawyer might be able to show the documents were not fraudulent or you were not aware they were fraudulent.

A defense lawyer might be able to prove you did not have a specific intent to defraud by showing the court you incorrectly filled out a document that you submitted to an insurance company.

For the crime of forgery in Los Angeles, the elements differ depending on the type of forgery. Accordingly, below are different sets of elements for the different types:

Signing with Someone Else's Name or a Fake Name:

Consult with a white collar crime attorney in Los Angeles to review your case to determine the best legal defenses.

A Forgery case is called a “wobbler,” meaning that the prosecutor's have discretion to file it either as a misdemeanor or a felony. If it is charged as a misdemeanor, the maximum penalty is one year in County jail and fines.

If it is charged as a felony, the maximum penalty is up to three years incarceration.

Available defenses by a Los Angeles white collar crime attorney always depend on the facts of the case and the nature of the forgery.

Arguments by an experienced lawyer include that you actually did have the necessary authorization to sign a name or modify a legal document. An attorney can also argue that you did not have the specific intent to defraud.

As these are serious offenses with high prison sentences, it is highly recommended that you consult with a Los Angeles white collar crime defense lawyer at our law firm as soon as you are aware of an investigation into you or charges have been filed against you.

Our experienced attorneys are prepared to start building a strong defense strategy on your behalf.

A criminal conviction can be a life-changing event. We have extensive experience representing clients at the sentencing hearing.

Over our decades of criminal law practice, our Los Angeles white collar crime attorneys have obtained tremendous results against any type of offense.

Call our lawyers for a free immediate response.