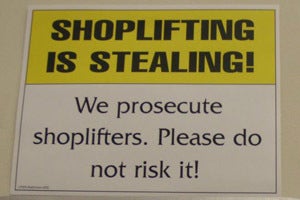 Penal Code 484 PC petty theft laws makes it a crime to steal someone's property when the value is $950 or less.

Under California law, the offense of “petty theft” refers to the stealing of property with a  value of under $950.

While petty theft is the lowest level of theft crime with which you can be charged, it is still an extremely serious offense that could result in significant penalties, including jail time.

Many cases of petty theft in California involve shoplifting, which is the common term used to describe that act of taking items from a retail store without paying for them.

While this type of conduct may seem relatively innocent when compared to other types of theft, it is still a serious matter that warrants retaining an experienced attorney.

Some other examples of conduct that could be prosecuted as petty theft include switching price tags, “borrowing” property with no intention of returning it, or taking items that you have access to at work for your own benefit.

A petty theft conviction can result in serious legal consequences, including the following:

The consequences of a theft conviction can last long after any court-imposed sanctions have ended. When you have been convicted of a crime involving theft, employers may be hesitant to hire you for fear that you may steal from them.

Similarly, landlords who conduct a background check on their potential tenants may not want to rent to a person with a criminal record. Because your criminal record is permanent, these issues and others like them could potentially affect you for years to come.

If you obtain goods or services at a business without paying, you could be charged with Defrauding an Innkeeper under California Penal Code 537.

As a person who has been formally accused of petty theft, it may feel like the deck is stacked against you. If you have not yet retained an attorney, it is likely that you have been aggressively questioned by police or store security personnel who made it seem like you have no choice but to plead guilty.

It is important to keep in mind that none of these people are on your side and almost certainly are not attorneys who understand how the legal system works. In California, the prosecution is required to establish that you committed every element of a crime beyond a reasonable doubt.

There are many potential defenses available in Los Angeles petty theft cases, including the following:

Whether these or any other legal defense applies in your case depends on a number of factors.

It is important to keep in mind that criminal defense is an extremely complicated area of law and it is often difficult for people who do not have legal training to recognize when a defense may apply. As a result, it is important to have every petty theft case reviewed by an attorney.

When you retain the lawyers of Eisner Gorin, you can rest assured that you have a qualified team of board-certified criminal defense specialists reviewing your case to determine whether any legal defenses are available.

We review every shred of evidence we can get our hands on, including police reports, surveillance tapes, eyewitness accounts, and loss prevention reports in order to build the strongest defense possible.

If there are no defenses available, an attorney may still be able to help you get a favorable recommendation from the prosecutor that may significantly reduce the penalties you are facing and even avoid a conviction.

Do not make the mistake of thinking that allegations of petty theft are not a serious legal matter. If you are convicted, you will be facing serious consequences and the creation of a criminal record that can affect your life for years.

To discuss your options with one of our skilled Los Angeles petty theft lawyers, contact the law office of Eisner Gorin LLP today at 877-781-1570 to review all the specific details of your theft crime case.