Possession of Methamphetamine for Sale - California Health and Safety Code 11378 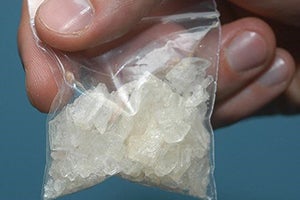 Health and Safety Code 11378 HS makes it a crime to possess methamphetamines with the intent to sell it.

The crime of “possession for sales of methamphetamine” is a serious drug crime under California Health and Safety Code 11378 that can result in severe penalties. In simple terms, a possessing meth for sale offense is the illegal possession of a controlled substance with the purpose or intent of selling it.

The term “intent” is different from actually selling, offering to sell, or transporting an illegal drug. Methamphetamine is a Schedule II stimulant, making it a controlled substance pursuant to HS 11378.

As the name implies, an HS 11378 prosecution necessarily involves the allegation that the defendant was in possession of a quantity of methamphetamine with the intent and purpose of selling those narcotics either now or at some point in the future.

A defendant doesn't have to be caught in the act of selling methamphetamine to be charged with HS 11378 possession of meth for sale. This statute also includes other drugs, such as ecstasy, steroids, opiates, ketamine, GHB, and PCP.

The “intent” to sell meth can be inferred by facts such as the amount of possessed, presence of cash or packaging items such as baggies, and other factors that can lead to a conclusion that the methamphetamine was not for personal use.

To give readers a better understanding of possession of methamphetamine for sale, our California criminal defense lawyers are providing a review below.

In order to be convicted of Health and Safety Code 11378, possessing meth for sale, the prosecutor must be able to prove, beyond a reasonable doubt, all the “elements of the crime” listed under CALCRIM 2302 Jury instructions:

The key factor of “possession” can be established in different ways. Actual possession means you personally possessed the meth, such as in your pocket.

Prosecutors will typically attempt to establish that you had possession of meth with the intent to sell by the quantity, packaging, whether you had scales, large sums of money, witness statements, and a lack of drug paraphernalia.

Possession of methamphetamine for sale is always a felony under California law. It is punishable by 16 months, two years, or three years in the California state prison but is also subject to potentially extremely long prison enhancements depending on a number of aggravating factors.

For example, if the methamphetamine for sale was possessed within 1000 feet of a drug treatment facility or homeless shelter, a one-year enhancement will be imposed.

If a minor is used by the defendant to assist in the methamphetamine sales, an additional three, six, or nine-year prison sentence will be imposed.

You could also face additional charges under California Penal Code 272, contributing to the delinquency of a minor.

If you are an undocumented immigrant, a HS 11378 conviction could lead to deportation. You are not eligible for drug diversion instead of jail time if convicted of possessing meth with intent to sell.

In short, in more aggravated methamphetamine sales cases, the defendant can potentially face a decade or more in state prison if convicted.

As with many other possessory crimes, defenses to HS 11378 prosecutions will tend to focus on unlawful search and seizure.

If the government obtained the evidence necessary to convict the defendant – the methamphetamine itself in most cases – through unlawful means which violated the defendant's Fourth Amendment right against unreasonable searches and seizures, that evidence must be suppressed and cannot be used to prosecute the defendant.

The general rule is that law enforcement cannot search an individual without a valid search warrant signed by a neutral magistrate which demonstrates probable cause.

However, numerous exceptions have eroded the warrant requirement over time including plain view, search incident to arrest, the automobile exception, the so-called Gant exception for searching the passenger compartment of an automobile, and others.

The reality is that most searches in the modern era are warrantless searches which are nevertheless upheld in court.

An experienced criminal defense attorney will analyze each case and its particular facts and circumstances to determine what, if any, challenges to the search of the client are likely to succeed through a motion to suppress under Penal Code Section 1538.5.

Challenging Element of “Intent” to Sell

Unlike simple possession, there is an intent element to an HS 11378 prosecution for possession for sales of methamphetamine.

If the defendant possessed the methamphetamine for personal use only and not with the intent to sell it to someone else, they are guilty only of the lesser crime of possession of methamphetamine pursuant to Section 11377 of the Health and Safety Code.

As discussed at more length in our article on that section, this is a much more favorable charge for a defendant to face even if ultimately convicted because of the availability of drug treatment diversion programs.

There is a much lighter sentencing exposure, the ability to have the charge reduced to a misdemeanor, and the ability to serve any time in county jail as opposed to state prison.

For that reason, a common defense to an HS 11378 charge is to assert that the methamphetamine possessed by the defendant was for personal use only and not for sales.

Whether or not this defense is likely to succeed will depend on the presence, or not, of indicia of sales activity.

These include the sheer quantity of the methamphetamine in question, the presence of large amounts of cash, the presence of paraphernalia of sales such as baggies, scales, etc., and other factors.

If you or a family member is charged or is under investigation for methamphetamine sales under Health and Safety Code Section 11378, contact our office immediately.

Our experienced team of criminal defense attorneys can address the specific issues in your case and work with you to begin forming a successful defense strategy based on the particular facts and circumstances over your situation.

As discussed above, an HS 11378 prosecution is a serious drug crime under California law which potentially exposes the defendant to lengthy state prison time.

Competent and aggressive criminal defense advocacy including deep knowledge of search and seizure law and the workings of the court system is crucial to maximizing the chances of a successful outcome in your case.

Eisner Gorin LLP is a nationally recognized criminal defense law firm with a highly skilled team of lawyers that have decades of combined experience.