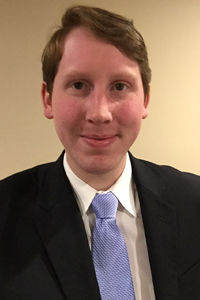 Robert Hill is an associate attorney at Eisner Gorin. He is licensed to practice in the courts of the State of California, and in federal court in the Central and Eastern Districts of California. Robert has worked on numerous misdemeanor and felony cases in the courts of Los Angeles, Orange, and Ventura counties. His focus is on achieving the best possible result for his clients, whether that be through a negotiated settlement with the government, or a jury trial.

Mr. Hill was admitted to the California State Bar in 2015.  He is a graduate of the University of New Hampshire School of Law where he defended indigent criminal defendants as a student attorney through the law school's Advanced Criminal Practice Clinic.

As an undergraduate, he attended the University of California Santa Cruz where he received his bachelor's degree in Politics.

Mr. Hill has served as second-chair in a federal jury trial for felony assault in which the client was acquitted of felony charges and received a probation-only sentence on a misdemeanor charge.

He also second-chaired a complex insurance fraud preliminary hearing in the downtown Los Angeles courthouse which resulted in the dismissal of multiple felony counts.

Through pre-filing intervention with law enforcement and prosecuting agencies, Mr. Hill seeks dismissal or reduction of charges for his clients.  He communicates his clients' innocence through presentation of mitigating information, independent defense investigation, and legal argument.

He understands that a criminal charge, even if the client is eventually vindicated in court, brings emotional stress and damage to a client's reputation.  He is committed to keeping his clients' records clean, and keeping them out of court, where at all possible.