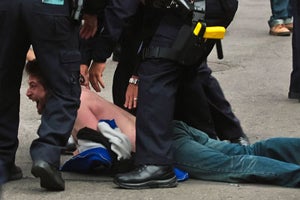 Penal Code 148(a)(1) resisting arrest is defined as willfully resisting or obstructing police officers in the performance of their duties.

Resisting arrest is covered under California Penal Code Section 148(a)(1). A general definition of this violent crime offense is when an individual resists, obstructs, or delays a police officer who is engaged in the performance of their duties.

The officer does not have to be in the physical act of making an arrest, but only lawfully performing their duty.

It is a common myth that to be charged with resisting arrest, physical contact is required. Behavior such as verbal interference along with delay and resistance could constitute resisting arrest when an individual is in the process of being lawfully arrested.

Unfortunately, many individuals in Los Angeles County are wrongfully charged with resisting arrest, but there are some legal defenses that can be used by an experienced Los Angeles criminal defense lawyer to challenge these unfair accusations.

Law enforcement officers are required to follow proper procedures when making an arrest. In some cases, officers will accuse a defendant of resisting arrest simply because they were uncooperative.

If you believe there are not sufficient grounds for you to be charged with resisting arrest, it is important to contact our Los Angeles criminal defense law firm as soon as possible. Our lawyers need to thoroughly review the events surrounding your arrest in order to determine your legal options to fight the allegations.

At Eisner Gorin LLP, we have represented many criminal defendants charged with resisting arrest.

As with all criminal offenses, the prosecutor must prove each of these elements beyond a reasonable doubt.

When the average person hears the phrase “resisting arrest,” they reasonably picture a criminal suspect trying to physically fight with an arresting officer, avoiding being handcuffed, or resisting while being placed in a squad car after being arrested. Others may also picture someone leading the police on a high-speed pursuit or a foot chase.

See related: Evading a Police Officer Laws in California and Felony Reckless Evading. All of these behaviors would clearly violate Penal Code 148.

However, certain types of non-violent, non-flight, behavior may also qualify as resisting.  For example, providing a false ID to an officer when lawfully required to identify yourself may give rise to a resisting charge.

Likewise, refusing to provide your name during booking is also resisting arrest, as it obstructs the officers from the performance of their lawful duties; i.e. getting your information so that they may complete the booking process.

An Example of Non-Violent Resisting

A recent case litigated by our Los Angeles criminal defense lawyers illustrates how a person may find themselves charged with resisting arrest for behavior that most people would not assume to be criminal at all.

Our client was allegedly improperly parked in a parking lot on private property. Police approached our client in a belligerent and demanding manner and began questioning him about his parking.

Our client objected to the officers' attitude and gave them the benefit of his opinion in colorful language.

Although our client had committed no criminal violation prior to the police's arrival at the scene (at most he was guilty of failing to follow the private parking lot's rules regarding how and where to park his vehicle), his verbal challenges to the police officer were interpreted as obstructing and delaying the officers and our client was charged with misdemeanor resisting arrest and was eventually convicted. His appeal is pending.

Interfering with an Unrelated Investigation May Constitute Resisting

You may be charged with resisting arrest in Los Angeles County even if you were not the subject of the original police investigation.

While the public certainly has the right to observe, and even audio and video record, the police in the commission of their public duties, such as engaging a member of the public in a traffic stop, individuals who observe such interactions must be cognizant that their behavior may be interpreted, rightly or wrongly, as resisting arrest.

For example, standing too close to police officers as they attempt to question or arrest an unrelated third party may qualify as “obstructing” or “delaying” the officers in the execution of their lawful duties.

Likewise, attempting to communicate with the suspect of an investigation at the scene may be deemed resisting. In both scenarios, the person who could be charged with resisting arrest is not the same as the person initially being detained or arrested. These examples illustrate how the nomenclature of resisting arrest can be confusing.

The key is the interference with the officers while they are attempting to carry out their duties. Consult with a Los Angeles criminal defense attorney at our office for more information.

A misdemeanor violation of Penal Code 148(a)(1) is punishable by up to 1 year in a Los Angeles County county jail, a $1,000 fine, or both. Most defendants, especially on first offenses, are granted probation rather than incarcerated.

However, California Penal Code Section 69 makes it a misdemeanor or felony crime for any individual to willfully attempt by means of threats or violence to prevent an executive officer from performing a lawful duty.

This offense is punishable by up to one year in a Los Angeles County jail or three years in a California state prison.

Our Los Angeles criminal defense lawyers have a track record of success defending clients charged with offenses against police officers. A few examples include:

Our attorneys will intervene on your behalf before court to protect your rights.

At Eisner Gorin, our Los Angeles criminal defense lawyers believe that successful intervention with law enforcement and the prosecuting agency before court is essential to achieving the best possible outcome for our clients.

In a resisting arrest case, the allegations will often boil down to a he-said/he-said scenario between the defendant and the arresting officer.

Unfortunately, the reality is that law enforcement officers are frequently viewed as more credible witnesses than civilians by judges and juries.

Accordingly, having an experienced criminal defense attorney who can communicate your innocence in an effective manner is critical in this type of case.

Call our office for a free immediate response with one of our attorneys regarding your resisting arrest case. We are available 24/7 at 877-781-1570.

Related Pages: Assault | Assault with a Deadly Weapon | Battery on a Peace Officer