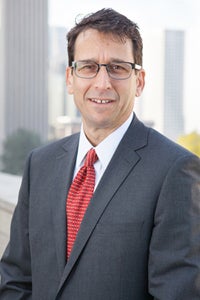 Mr. Eisner has successfully defended clients facing the most serious criminal accusations for over 31 years.

He practices criminal defense exclusively, and have been a Certified Specialist in Criminal Law - Certified by the California State Bar's Board of Legal Specialization - for over 20 years.

This designation, and periodic recertification, comes only after demonstrating the highest level of proficiency in criminal defense, extensive litigation of complex and serious cases, and a review of his character and background amongst peers, prosecutors and judges.

He is involved in every stage of the case proceedings, often intervening immediately with police investigators and prosecutors in attempt to avoid or divert from a criminal filing at the outset.

If the matter must proceed to court, our legal team will work diligently toward getting clients out of custody at arraignment and bail hearings.

Our law firm will challenge charges at the Preliminary Hearing stage, Pretrial motions and at Trial, Appeal and Probation Violations.

Our firm prides itself on being zealous advocates, turning over every leaf to insure the client is afforded the protections to which they are entitled. 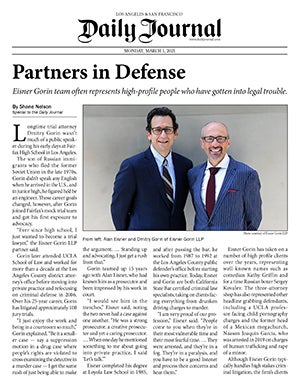 We insure that our clients are treated fairly by the justice system.

Mr. Eisner received his B.A. degree from University of California, Berkeley in 1982, his J.D. degree from Loyola Law School in 1985, and became a member of the California Bar in 1986.

He was employed as a Deputy Public Defender in Los Angeles from 1987 through 1992 when he opened my own practice.

He traveled throughout the United States defending clients in Federal Court.

When clients and their families come to our firm with their criminal problem it is often the worst circumstance they have faced in their lives.

There is nothing more important to him, both personally and professionally, than navigating them through the trauma to a successful resolution.

Read what Alan's past clients have to say:

Alan got me the best possible result on my case: I was facing a felony charge and jail time, which on the first arraignment was reduced to a misdemeanor. Alan got me into a DEJ program that once complete, the entire case was dismissed. I could not have asked for a better result on my case from a mistake I wish never happened. I highly recommend this criminal defense law firm to anyone facing criminal charges. Alan was caring and approachable from the first consultation and was always willing to talk to me throughout the entire process. If you are ever in trouble, Alan is the guy you want to call. Thanks again Alan.

Compassionate and knowledgeable criminal defense attorney: At 27, I made some bad decisions a year ago and began selling drugs. This resulted in my arrest. After some research, I realized I was facing over five years in prison. so I began searching for the best criminal defense attorney on the Internet. After interviewing five attorneys in their offices, I chose Alan Eisner. I realized almost immediately that he was the best attorney for my defense not only because of his knowledge of the law, but also due to his nurturing attitude. I took Alan's advice and started attending narcotics anonymous, applied for college classes and moved back into my home. The fix was almost immediate and I realized the carelessness of my pursuits. Alan was able to bring this family catastrophe to a swift conclusion in two court sessions. I obtained the best possible outcome and only received three years probation and 300 hours of community service. This just would have not been possible without Alan's counsel. If you are in a similar situation remember that second chances are possible with the right criminal defense lawyer. I am now starting my new life.

Alan got me an infraction after a felony arrest: I must say that Mr. Eisner is a compassionate and intelligent criminal defense lawyer. His law firm works as a team and had two lawyers helping me. I was a wreck, scared, and he got me an infraction after a felony arrest. I will go to their law firm for an expungement soon. I learned my lesson from the arrest, and know I will never get into that situation again. Mr. Eisner helped me move forward with my life. He answered all my questions and even met with me on the weekend because I work full-time. I appreciate everything he did.

Mr. Eisner provided great representation on my case: Mr. Eisner helped me out on my case and provided clear information about all the risks involved and clear guidance on my best choices. I am very happy with the outcome of my case. He was personable and friendly, well-informed and trustworthy. I really liked how he was available to me at anytime and always answered my questions fully. I highly recommend his services. He will give you what you need.

Job well done. Tough case. Job well done as well as can be with little room to maneuver. Alan is experienced, caring, and engaged. He always kept me informed. Referred by another attorney. It was great advice and outcome on my case. Highly recommend.

Outstanding criminal defense lawyer. Alan Eisner and his legal team are the best attorneys you could work with. He took care of me and made sure I got the best possible outcome on my case. His knowledge of the court process is incredible and he always explained how everything worked. I definitely recommend his law firm. Thank you again for all your help on my case.

He got my charge dropped. I was wrongfully accused by someone I thought was a friend. Attorney Alan Eisner got the cops off my back and the charge was dropped. It's so easy to make a police report, but so scary when you were falsely accused. Alan kept me informed at every step of the process and accomplished what they promised.

Alan Gave Me Excellent Representation! I highly recommend the criminal defense law firm of Eisner Gorin. Alan Eisner provided excellent representation and we were triumphant on my case. He always took the time to accept my calls and let me know what was happening on my case. I'm very happy wit the outcome.

Alan got my domestic violence case dropped. Criminal defense attorney Alan Eisner caused a false arrest to be dropped without criminal charges being filed. It started as a felony domestic violence and ended up as a city attorney hearing. Alan and his partner saw me in their Van Nuys office on the weekend and worked on my case right away. I'm very glad I found this law firm and recommend their services.

Got My DUI Case Dismissed! Incredible! They got my DUI case thrown out. They are friendly, incredibly intelligent, and worth every penny. Alan always let me know what was going on and really helped me keep calm during the whole case. I will recommend them to everyone possible.

Alan Did A Great Job. I found the criminal defense attorneys of Eisner Gorin online after I was arrested for drunk driving. Because there was an accident, I was arrested for a DUI felony and faced a $100,000 bail. I was a ecstatic at the end of the case. The felony was dropped and the charge was reduced to a misdemeanor with no jail time. They did a great job on my case.