The Crime of Drug Possession With Intent to Sell - HS 11351 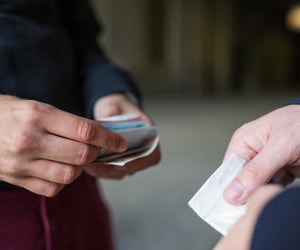 California Health and Safety Code 11351 HS makes it a felony crime to possess controlled substances with intent to sell them.

Under drug possession with intent to sell, there is constructive and actual possession, and for each, you must have had physical control of the illegal drug in question.

For constructive, you must have had control of the illegal substance, even with the involvement of another party.

Under California Health and Safety Code 11351, possession with intent to sell is a felony offense.

In some cases, possession with intent to sell could be classified as a misdemeanor or felony under California law, varying with regards to the drug or substance in question.

When a prosecutor can prove that the substances or drugs were possessed with the intention of selling them to other parties, the penalties tend to be steeper.

If you have been accused of a drug crime, call an experienced Los Angeles drug sales attorney at our law firm to review your case and discuss legal options.

Evidence of Possession With Intent To Sell

A defendant in the sale of illegal drugs, can be arrested and charged on the premise of being pulled over with ecstasy, cocaine, or heroin in their car, or even someone who is in possession of, working in, or otherwise is an accessory in the operation of a meth lab.

Law enforcement must find evidence of your intent to sell, such as baggies, large amounts of cash, as well as correspondence with any alleged buyers interested in purchasing the illegal substance, including e-mail, text messages, phone history, postal mail, or even other commonly employed methods of communication between alleged buyers and sellers.

In many cases, drug possession with intent to sell can be pushed by presenting incriminating circumstances, sometimes rendering it unnecessary for the prosecutor to need to provide evidence that the party had knowledge of the presence of the drugs and/or illegal substance.

This means the prosecution could push for a conviction without a confession, without direct evidence, if they can simply provide a convincing case that the defendant had some kind of knowledge, or even suspicion, that the substances were in their possession (such as in a jacket pocket, a vehicle, etc).

Los Angeles Drug Crime Lawyers with a Record of Success

We have obtained numerous drug crime case victories over our decades of criminal law practice. Below is just one example of our courtroom success defending our clients against a drug offense:

Client was facing a 40 year federal prison sentence after charged with serious drug related offense of purchasing pseudo-ephedrine in large quantities with the purpose of transportation and sale. Federal Drug Enforcement Agents gained access to his home after obtaining consent from the owner under false pretenses.

We aggressively challenged in court the legality of the entry to his home and the seizure of his property. We argued that owner's consent was unlawfully obtained. After consideration, the Federal U.S. District Court Judge agreed with our argument and decided to suppress the contraband, which resulted in the drug case against our client to be dismissed.

Call a Drug Possession With Intent To Sell Lawyer

If you are facing a drug possession with intent to sell charge, it's critical to contact a Los Angeles drug sales attorney as soon as possible. We know from experience that police reports don't always tell an accurate story. Whatever happened leading to your arrest, you need an experienced law firm to take immediate charge of your drug crime case.

Our legal team is committed to provide superior legal representation. We have a long history of success to prove it. We have defended clients in state and federal courts against all type of drug related offenses.

Our defense lawyers have over five decades of combined experience and have been recognized as a Preeminent Law Firm since 2003. This places us in the top 5% of all U.S. law firms.

We have seen many individuals who were arrested for drug possession with intent to sell improperly charged. Their drug possession was nothing more than simple possession for personal use. This is why we take the necessary time to listen to our clients and conduct a complete review of all the evidence and circumstances of the arrest.

Are you the victim of police misconduct? Our law firm could file a California Pitchess motion to challenge the credibility of the police officer.

Let us negotiate with the prosecutor on your behalf. It's possible that immediate intervention into your case by our experienced defense attorneys can prove weakness in the case, resulting in a lesser misdemeanor drug charge or even convincing the prosecutor to dismiss the case.

This could include diversion to a drug rehabilitation under California Proposition 36, house arrest with electronic monitoring, or even being placed on probation with mandatory drug testing.