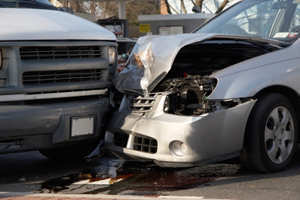 Penal Code 191.5(b) PC DUI vehicular manslaughter is killing someone while driving a motor vehicle while intoxicated with ordinary negligence.

Vehicular manslaughter while intoxicated charges are defined under California Penal Code Section 191.5(b).

This criminal offense will apply to situations where you were driving under the influence of alcohol or drugs while driving recklessly, or when you commit an offense that kills another person that was direct consequence of a drunken driving accident.

In simple terms, if your DUI caused the death of another person, you will typically face criminal charges under PC 191.5.

However, there are two separate versions of vehicular manslaughter while intoxicated charges. Penal Code 191.5(b) means you were negligent or careless.

Penal Code 191.5(a) means you acted with gross negligence, which is more than just carelessness.

It means you acted in a clearly unreasonable and unsafe manner. In order to cover all the legal definitions, we are going to focus here on Penal Code Section 191.5(b).

In Los Angeles County criminal courts, this charge is commonly known as “vehicular manslaughter while intoxicated with ordinary negligence."

An example includes a situation where you are driving with a blood alcohol content (BAC) of .08 or more, and are talking on your cell without using a legally required hands-free device.

During the call, you strike and kill a pedestrian crossing the street. Another example includes a situation where you used some methamphetamine at a friend's house. On the way home, you are driving over the speed limit and are involved in a rear-end collision with another vehicle, killing the driver.

Under California law, vehicular manslaughter while intoxicated is a “wobbler.” This means the prosecutor has the discretion to charge your case as either a misdemeanor or felony offense.

If you have been accused of vehicular manslaughter while intoxicated, you need to contact a highly experienced Los Angeles criminal defense lawyer at Eisner Gorin LLP immediately.

Now that we discussed a general overview, let's take a more thorough look at the legal definitions, penalties, and potential legal defenses below.

As you can see, the law has a somewhat complex definition for what is considered this type of manslaughter. This is due to the fact that manslaughter charges are similar to murder charges, but they are a less serious offense. In manslaughter cases, there was no specific intent to kill another person.

This means the prosecutor has to be able to prove each one in order to obtain a conviction. Let's review each element of the crime below:

These elements of the crime means you must have acted with negligence in order to be found guilty of violating California Penal Code Section 191.5(b).

In other words, the reason someone was killed was due to the fact you violated a traffic law, other than DUI, and did so without gross negligence, or your conduct was not technically illegal but you knew it could dangerous. For more detailed information, call a Los Angeles criminal defense lawyer at our law firm.

Driving Intoxicated or Under the Influence

Additionally, if you were under 21 years old and were driving with a blood alcohol level of .05 or higher, it would be considered under the influence, in violation of California Vehicle Code 23140.6.

What is Ordinary Negligence?

In simple terms, ordinary negligence is carelessness, a lapse in judgment, or not paying attention.

It means you did not use reasonable care to prevent reasonably predictable harm to another person, when a reasonably careful person would have done so in the same situation.

For example, while driving under the influence on your way home, you briefly take your eyes off the road to read a text message, which is long enough to cause an accident where another person is killed.

In this example, vehicular manslaughter while intoxicated charges would apply because the death was caused by your negligent conduct, and was a direct and probable consequence.

As stated above, vehicular manslaughter while intoxicated, California Penal Code Section 191.5(b), is commonly known as a wobbler.

This means the case can be filed as a misdemeanor or felony crime. The Los Angeles County prosecutor will typically make their decision depending on the specific facts and circumstances of the case, and your criminal history.

If you are convicted of a misdemeanor crime of vehicular manslaughter while intoxicated, with ordinary negligence, the legal penalties can include:

If you are convicted of vehicular manslaughter while intoxicated as a felony offense, in violation of PC 191.5(b), the legal penalties include:

These legal penalties above are in addition to DUI penalties, including alcohol or drug treatment, license suspension and mandatory DUI classes.

Finally, if you are convicted of California Penal Code Section 191.5(b) as a felony, your driver's license will be suspended for one year.

If you are caught driving, you can expect to be charged with violating California Vehicle Code 14601, driving on a suspended license.

In some cases, vehicular manslaughter while intoxicated charges could be charged to similar California laws. These include:

Can I Beat a DUI Vehicular Manslaughter Charge?

It may be possible, but you will need a skilled Los Angeles criminal lawyer with experience in DUI legal defenses.

If you have been accused of committing a DUI vehicular homicide offense, the legal consequences can be harsh and life-altering. Therefore, a thorough defense investigation must be conducted.

When you retain the Los Angeles criminal defense law firm at Eisner Gorin LLP, we will utilize the services of numerous experts to review the circumstances and evidence to seek the most effective defense strategy.

We may be able to have your charges reduced or even dismissed. In many vehicular manslaughter cases, police don't conduct a thorough investigation and will often only collect evidence that tends to prove your guilt.

Our law firm will question all witnesses and use the services of an independent accident reconstruction expert. Our law firm has developed a variety of effective legal strategies to defend our clients against charges of vehicular manslaughter while intoxicated.

You were not under the influence – Our lawyers will investigate the manner in which the breath or blood test were taken and explore whether we can have the test results suppressed. We can question the police procedures used in your DUI arrest and subsequent investigation in an effort to uncover police misconduct or other unlawful actions.

We might be able to challenge the prosecutor's claim you were intoxicated at the time of the accident. We could attack the evidence by showing you may have appeared under the influence, but it was due to adrenaline from being involved in an car accident.

We could even challenge the validity your blood or breath test results by showing the instruments used are not reliable.

No negligent conduct – On the crowded streets and highways of Los Angeles County, it's common to be placed in a situation where you have to make a split second decision. In some cases, the decision was wrong, but does not necessarily mean it was negligent.

In some cases, we might be able to present a successful argument to the prosecutor that your driving at the time of the accident was no different from any other reasonably careful person.

In other words, your conduct was not negligent. In many serious vehicle accidents, it's often complicated to sort out exactly what happened.

Even in vehicular manslaughter cases where you actually drove in a negligent manner and another person was killed, there are situations where it's difficult for the prosecutor to prove the death was caused by your negligence.

For example, it's possible the victim may have been negligent and the main reason for their death.

Our experienced criminal defense attorneys will know how to challenge the prosecution's account of what happened, often with the help of accident reconstruction expert witness.

I highly recommend Dmity Gorin. I was charged with a felony DUI with bodily injury and facing significant jail time if convicted. A family friend who retained his criminal defense law firm in past and was enrolled in his one of his law school classes when he taught at UCLA recommended I contact him immediately.

From my first contact with him to my last court date, he and his legal team at Eisner Gorin LLP were very professional, but still empathetic towards me and my family. Dmitry always stayed in contact with me to provide any new information about my case. I found him to be honest, direct, and very pragmatic.

With Dmitry and his law firm's knowledge of the Los Angeles County criminal courts system, hard work, and diligence, my serious felony criminal charges were reduced to a misdemeanor first time DUI offense. I HIGHLY recommend Dmitry and his colleagues. Should I ever need a criminal lawyer in the future, I know exactly who to call. – E.V.

If you are facing allegations of vehicular manslaughter while intoxicated, in violation of California Penal Code Section 191.5(b), call the Los Angeles criminal defense lawyers at Eisner Gorin LLP.