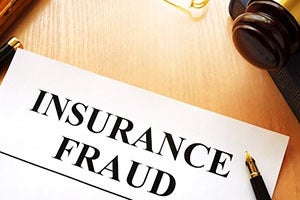 Generally, this statute is used to prosecute the knowing submission of false or fraudulent claims for insurance reimbursement.

The specific details of the white collar crime of insurance fraud can vary tremendously.

In general, insurance claims fraud cases are filed where the defendant makes a material misrepresentation during the claims process.

A misrepresentation is material if the falsely reported fact is important to the amount of loss, or the determination of liability.

Not all facts about an incident which are reported in a claim are material.

For instance, if an otherwise valid claim included the detail that the defendant was wearing a blue sweatshirt at the time of an auto collision, for instance, when in fact the sweatshirt was black, the claim would certainly contain a false statement, but not one of any consequence.

We would not expect the defendant to be charged based on this misrepresentation, even assuming it was made knowingly.

To give our readers useful information about submitting fraudulent insurance claims under Penal Code 550, our California criminal defense attorneys are providing an overview below.

It's also a crime for any person to knowingly:

It should be noted that under Penal Code 550, different acts of fraud will be considered separate criminal charges.

A detail which affects the responsibility of the insurer or particularly the amount of the claimed loss will be deemed material and is much more likely to result in a criminal case being filed.

For example, if an auto collision results in $10,000 of property damage as estimated by a reputable body shop, but the defendant submits a claim for $100,000 knowing that the true loss amount is much less than the claimed amount, we would expect a filing under Penal Code § 550 to be brought in criminal court.

A violation of Penal Code 550 is charged as a felony crime. If convicted, you are facing the following penalties:

It should be noted that making false statements under PC 550 is a “wobbler” and can be charged as either a misdemeanor or a felony case.

If you are convicted of a felony, the penalties are the same as above. If convicted on a misdemeanor, you will be facing:

It should also be noted that following re-alignment, these sentences are typically now served in a county jail.

If you have been accused of fraudulent insurance claims in violation of Penal Code 550, our Los Angeles criminal defense lawyers can use various strategies to obtain the best possible outcome. We need to first closely examine all the details in order to determine an appropriate plan of attack.

The most common defenses include:

One of the most common defenses which recurs in insurance claims fraud cases is that the defendant did not knowingly misrepresent the facts upon which the claim was based.

In the same scenario discussed previously, if the defendant claims a $100,000 because the body shop was either dishonest or incompetent, the defendant should not be held liable for insurance claims fraud merely because the insurer obtains a lower and more accurate estimate later.

In that case, the claimed amount was factually incorrect, but the defendant had no reason to believe he was submitting a false claim. He was simply mistaken.

Similarly, there may be good faith disagreements as to the scope of coverage in an insurance policy.

Depending on how the policy is written, an insured may believe that a given incident should give rise to a valid claim for reimbursement when in fact that policy excludes the particular type of loss or injury suffered by the insured.

If charged with claims fraud, the insured, now the defendant, could argue that they did not knowingly submit a false or fraudulent claim.

Rather, the defendant has a good faith civil dispute with the insurance company over the scope and extent of coverage which should be resolved outside of criminal court.

Of course, insurance companies have a vested interest in denying claims, particularly when they will result in large payouts to the insured.

One justification for denying a claim for reimbursement is to allege claims fraud against the insured.

Many insurance companies have Special Investigations Units, or SIUs, which work closely with the California Department of Insurance to report and investigate suspected insurance claims fraud, among other forms of insurance fraud such as application fraud.

In past cases, we have successfully argued in court that the insurance company has mischaracterized a bona fide dispute over the scope of coverage between insurer and insured to attempt to avoid paying on a large claim.

If you or a family member have been charged with insurance claims fraud in violation of Penal Code § 550, our experienced criminal defense attorneys can assist you in maximizing your chances for a successful outcome.

We specialize in defending criminal charges in the investigative stage, before they are formally filed in court, to attempt to reduce or drop charges through a prefiling intervention.

Even if the case is formally filed, there are many opportunities for a successful resolution either through a negotiated settlement with the government, or ultimately through litigating at the preliminary hearing or at a jury trial.

We need to review the specific details of your case and legal options. We serve clients throughout Southern California, including the greater Los Angeles area and the San Fernando Valley.