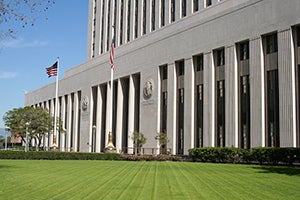 A plea bargain is an agreement between defendant and federal prosecutor where they will plead guilty in exchange for reduced charges or lighter sentence.

Plea bargains are a formal agreement between defendant and federal prosecutor where the defendant will plead guilty in exchange for reduced charges, or to receive a lighter sentence.

Plea agreements provide some benefits for both parties. For the federal prosecutor, it means they are resolving the case without all the time and expense of a trial.

For a defendant, it means they will typically receive a lighter sentence, or have some charges reduced or dismissed.

In state-level criminal court cases, plea agreements are often made orally and then put on the record with a simple waiver of rights form being the only formal written record of the terms and defendant's understanding of the deal they are taking.

However, federal criminal cases which resolve by plea agreement often feature lengthy written documents which spell out in great detail the factual admissions the defendant is making, the rights the defendant and the government are agreeing to waive or give up, the agreement of the parties as to sentencing, and other information.

Also, a federal plea deal is not always the final word. Defendants need to understand that the sentencing range that was agreed upon by the federal prosecutor is only a recommendation to the judge.

This article reviews some of the unique features of plea agreements in federal criminal cases.

The first feature of a federal plea agreement is the charge or charges to which the defendant is agreeing to plead guilty.

These charges may be among the charges contained in the indictment, assuming one has already been filed against the defendant, or can be different charges which the parties agree to substitute in the interests of justice.

The defendant may also be required to admit certain enhancements.

Factual Basis Portion of the Agreement

One of the most important features in the federal plea agreement which has a substantial impact at sentencing is the factual basis portion of the agreement.

In this section, the government and the defendant agree to a specific factual scenario which lays out the defendant's unlawful conduct, usually in significant detail.

The factual basis also critically contains stipulations about the loss amount, if any, caused by the crime.

In white collar cases or those involving theft or fraud, this is a critical factor which can radically change the presumptive sentence the defendant will receive at sentencing based on an application of the United States Sentencing Guidelines.

Often, the parties cannot agree on a specific amount so they will stipulate to a range and reserve the right to argue for a higher or lower loss amount at the time of sentencing and leave the ultimate determination up to the judge.

In this way, through a “limited mutual waiver of appeal,” the parties have agreed that the judgment will be final and neither party will seek to displace the plea by way of appeal unless the judge imposes a sentence that is substantially outside of the range contemplated by the parties.

This concept of a sentencing range is important especially in federal court as a federal judge at sentencing is not bound by the parties' expectations of what the sentence should be. The judge can depart higher or lower from the guidelines range, and is not bound to impose a sentence requested by either party.

As federal judges take the guidelines provisions very seriously, even though they are advisory only, this portion of the plea agreement is also critical.

The parties will often stipulate to a base offense level, enhancements for specific offense conduct, a criminal history category based on the defendant's prior record, and any departures or variances which the parties can mutually agree are appropriate.

Again, the judge is not legally bound by these determinations as they are not a party to the agreement.

Nevertheless, most judges will give weight to the parties' agreement as they are more familiar with the facts of the case and presumably have come to an agreement based on lengthy discussions including of evidence in the case which is not apparent on the face of the plea agreement.

Most Federal Cases Result in a Plea Agreement

It's not uncommon for a federal prosecutor to initiate a conservation in order to discuss a plea bargain.

Their decision to reach out for a deal is based on numerous factors, including the strength of evidence on the case.

It's also not uncommon for a federal prosecutor to charge a defendant with the most serious offense possible in order to motivate a defendant to plead guilty to a lesser charge through a plea agreement.

Through plea agreements, federal prosecutors can obtain a guilty plea without a trial and defendants can greatly reduce their chances of a lengthy federal prison sentence.

Your chances of obtaining a favorable deal are much greater when you have experienced legal representation.

Federal plea bargaining is a long and involved process which is crucial for maximizing the chances of a successful outcome for a federal criminal defendant.

Contact our experienced team of federal criminal defense attorneys for an initial consultation and more information about federal plea agreements.