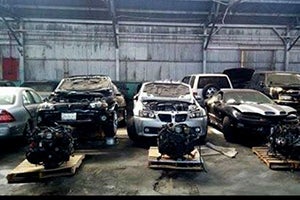 California Vehicle Code 10801 VC makes it a crime to knowingly own or operate a chop shop and carries harsh penalties if convicted.

In the state of California, there is a huge underground black market for all types of automobile parts. Many parts are interchangeable with other cars and the stolen parts are hard to identify.

Therefore, many people steal vehicles for the sole purpose to strip them down completely and sell the parts individually. This type of infamous illegal theft crime is commonly known as a “chop shop.”

Under California Vehicle Code 10801, it's a crime to knowingly own or operate a chop shop, and the statute carries stiff penalties for anyone who is convicted.

California Vehicle Code 250 describes a chop shop as any premises where any motor vehicle or part was obtained by theft, fraud, or conspiracy is altered, destroyed, disassembled, dismantled, or stored to alter, deface, disguise, counterfeit, forge, or to remove identity.

A common example includes a situation where someone operates a garage where car thieves bring them stolen cars.

The man who owns and operates the garage strips down each vehicle and then sells the individual parts to other people. In this classic scenario, he could be charged with operating a chop shop in violation of Vehicle Code Section 10801.

To give readers a complete understanding of the laws on owning or operating a chop shop, our California criminal defense lawyers are providing an outline below.

California Vehicle Code 10801 defines the crime of owning or operating a chop shop as:

It should be noted that “knowingly” operating a chop shop means you knew you were involved in a chop shop, the vehicle or the vehicle parts were illegally obtained, and you also knew the parts were obtained to disguise the identity or unlawfully sell them.

It should also be noted that “operating” a chop shop doesn't mean you have to own or oversee the operation of a chop shop to be guilty of violating VC 10801.

In other words, it's sufficient for a conviction if you were just actively involved in the unlawful operation of the chop shop, even if it's not planned.

In order to be convicted of owning or operating a chop shop in violation of California Vehicle Code 10801, the prosecutor has to be able to prove all the elements of the crime listed under CALCRIM 1752 Jury instructions:

It should be noted that actually proving a defendant “knew” is frequently difficult for a prosecutor.

They will typically depend of circumstantial evidence, and a jury could convict if all the circumstances are sufficient to establish guilt.

California Vehicle Code 10801 is a “wobbler,” meaning the prosecutor has the discretion to file the charges as either a misdemeanor or felony crime.

The decision on how to file the case is normally based on the amount of vehicles involved, total value of damages, level of chop shop operation, and your prior criminal record.

If the judge sentences you to probation, then you will be required to following certain terms and conditions.

These include monthly meetings with a probation officer, community service hours, search of your property without warrant, and victim restitution.

Any violation of the terms of probation can result in a serving time in jail.

If you have been charged with owning or operating a chop shop that violated California Vehicle Code 10801, our Los Angeles criminal defense lawyers can use a range of strategies in an effort to obtain the best possible outcome on the case.  Common defenses include:

Recall the elements of the crime above that state the prosecutor has to be able to prove you had knowledge of the chop shop operation. In other words, if you didn't know about the illegal activity, then you can't be convicted.

The prosecutor has to has to prove that you intended to alter, destroy or steal vehicles or their parts. We might be able to argue you didn't intent to participate the illegal activity. If successful at creating reasonable doubt, it could be an effective tool for negotiating for a lesser charge or even case dismissal.

You Didn't Own or Operate the Chop Shop

We might be able to argue it was the prior owner that was operating a chop shop by altering, destroying, or storing stolen vehicles or parts. However, you are the new owner and no illegal activity has occurred since you took over the shop and didn't know about the prior activity.

If you or a family member has been accused of owning or operating a chop shop that was in violation of California Vehicle Code 10801, call our Los Angeles criminal attorneys to review the details and options moving forward.

Eisner Gorin LLP is a top-ranked criminal defense law firm with a team of highly experienced lawyers that have a record of success.