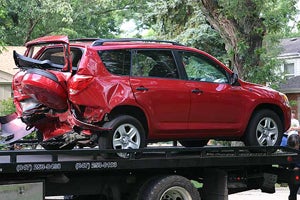 Vehicle Code 23153 VC describes the crime of “DUI causing injury” as driving under the influence and causing injury to another person.

Being involved in an accident, while driving under the influence, substantially increases the legal penalties associated with a DUI. The extent of those additional penalties depends upon the severity of the accident.

Where the damage is only done to someone else's property, such as another vehicle, the intoxicated driver will be charged with violating Vehicle Code 23152, just as if the person was charged with a DUI after a regular traffic stop.

However, in addition to the typical criminal penalties associated with a DUI, the prosecutor will also require the performance of community service and attendance at education programs like the Mothers Against Drunk Driving Victim Impact Panel and Hospital and Morgue Program.

If you have been accused of driving under the influence and causing an accident or injury, you need to immediately consult with a Los Angeles DUI attorney at  Eisner Gorin LLP to review the details of your case and start preparing a solid defense strategy.

In the unfortunate circumstance where someone is injured as a result of the accident, the intoxicated driver can expect to be charged with violating Vehicle Code 23153. In that case, the person arrested for driving under the influence causing injury is typically charged with:

If the prosecutor does decide the file felony charges, the judge still has the authority to reduce the charges to a misdemeanor if a reduction would serve the interests of justice. In making that decision, the judge takes into account the specific facts and circumstances of the case, as well as the character of the defendant.

Finally, in the most serious circumstance, where the accident has resulted in the death of another person, the intoxicated driver may be charged with vehicular manslaughter or even a Watson DUI murder.

It is not uncommon for a person to be charged with both DUI and Hit and Run (Vehicle Code 2001), where they continue driving after the accident and fail to leave a note on the damaged property. This can occur even if the only damaged property is a street sign or light pole, owned by the City, County, or State.

The law requires that a person involved in an accident causing damage to property must stop and exchange information. If the damaged property is government property, then the driver must contact the police to report the accident.

Take Immediate Steps to Protect Yourself

If you have been involved in an accident and accused of DUI, retain an attorney as soon as possible. The experienced criminal defense attorney will take immediate steps to mitigate the fallout. First and foremost, a skilled criminal defense lawyer will look into the causes of the accident.

It may even be necessary to retain the services of an expert accident reconstructionist.

Where the driver is clearly at fault, a knowledgeable DUI lawyer will take immediate steps to see that the damaged or injured party is swiftly compensated for their damages, known as restitution.

The criminal lawyer will also start gathering evidence of the good character of the defendant, putting together what is referred to as a mitigation packet. The mitigation packet can be used to persuade the prosecutor's office to file misdemeanor rather than felony charges, where applicable.

At Eisner Gorin LLP, a Los Angeles DUI lawyer from our law firm focuses on getting your DUI accident charges reduced or dismissed.

With over 60 years of court litigation experience, our DUI attorneys have a reputation of providing an aggressive and thorough courtroom defense.

We have a track record of success in defending our clients against charges of driving under the influence and causing an accident or injury. Here are a few case examples:

At Eisner Gorin LLP, our firm partners have argued DUI causing accident or injury cases as both prosecutors and criminal defense lawyers, and clearly understand where the problems of proof typically lie in the prosecutor's case against you.

Our Los Angeles DUI attorneys use the most effective defense strategies to obtain the best possible outcome. After a thorough review of the police report and working with our client to discover problems of proof, our defense lawyers will present all possible defense evidence to contest the charges.

A Los Angeles DUI lawyer at our law firm is available to review the details of your case and discuss legal options.