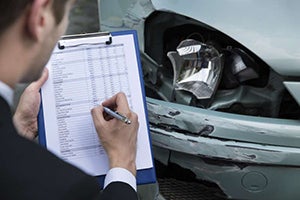 Penal Code 548 PC makes it a crime for someone to damage or abandon a vehicle in order fraudulently submit an auto insurance claim.

Auto insurance fraud in California can be committed in a variety of ways and every form is described under different statutes.

Under California Penal Code Section 548, it's a crime to:

This type of fraud is commonly referred to a “staging an accident,” but it's important to note it's just one statue listed in California's auto insurance fraud laws.

A common example includes a situation where somebody damages their own vehicle in order to collect money from their insurance company.

Another example is a situation where somebody abandons their vehicle in a secluded location and makes a report to their insurance company that the car was stolen.

The white collar crime of auto insurance fraud in California is often a difficult criminal charge for prosecutors because of the complexity of the evidence needed obtain a conviction.

The penalties for a Penal Code 548 conviction could carry a significant sentence and fines.

Due to the harsh consequences, you need to consult with a skilled criminal defense lawyer who is familiar with the local courts, prosecutors, and judges.

At Eisner Gorin LLP, we have decades of experience and a track record of success in handing all types of auto insurance fraud cases.

To give our readers useful information about the crime of penal Code 548 damaging or abandoning a vehicle, our California criminal defense lawyers are providing an overview below.

California Penal Code Section 548 defines the criminal offense of damaging or abandoning a vehicle as follows:

This statute that defines fraud against an insurer describes defrauding or prejudicing an insurer as an act that must have specific elements of the crime under CALCRIM 2004 Jury Instructions:

“Intent to defraud” in context of PC 548 simply means you had an intent to deceive the insurance company to cause them loss of money - or cause damage to their financial or property rights.

It should be noted you can still be found guilty of Penal Code 548, damaging or abandoning a vehicle, even in a situation where the insurance company doesn't lose any money, or if the vehicle was not owned by the defendant.

It should also be noted you can still be found guilty if the insurance policy was invalid, as long as you believed it was valid – and you committed the crime with intent to collect money from the policy.

There are a variety of ways for someone to be found guilty of auto insurance fraud in California, including, if you committed any of the following:

Penalties for Damaging or Abandoning a Vehicle

If you are convicted of California Penal Code 548, damaging or abandoning a vehicle for auto insurance fraud, it's a felony crime and you will be facing:

It should be noted that the judge has the discretion to place you on formal felony probation, rather than spending time jail.

If you have a prior felony conviction for auto insurance fraud under California Penal Code 548 or 550.7, there is a two-year sentence enhancement.

The closely related California offenses for Penal Code 548, include the following:

If you have been accused of damaging or abandoning a vehicle for auto insurance fraud in violation of California Penal Code 548, our Los Angeles criminal defense lawyers can use a variety of defense strategies on your behalf.

It might be possible to get your charges reduced or dismissed.

Every case is unique and will first require a close examination of the facts and circumstances of your case. The most common defenses to against PC 548 charges include the following.

The legal definition above, it states that you must have had an intent to defraud the insurer in order to be convicted of Penal Code 548. We might be able to make a reasonable argument that you did not act with this critical element of the crime. If the prosecutor can't prove intent, you have a good chance at avoiding a conviction.

Lack of Probable Cause

Under the Fourth Amendment to the United States Constitution, law enforcement authorities must a probable cause before they can detain or arrest you for a crime. Perhaps we can make an argument probable cause didn't exist – meaning evidence obtained after the unlawful arrest has to be excluded.

In most case, exclusion of critical evidence will force the prosecutor to reduce the charges of dismiss the case.

In certain cases, our criminal lawyers might be able to argue you were falsely accused. Perhaps you are the victim of someone making false accusations against you out of anger, jealously, or revenge.

If you have been accused of damaging or abandoning a vehicle under California Penal Code 548, or any other type of auto insurance fraud, you could be facing harsh consequences.

At Eisner Gorin LLP, our Los Angeles criminal defense law firm has decades of success defending clients against all forms of fraud-related cases.

Contact our law firm to review the details of your case and legal option.