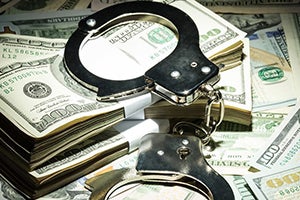 California Health and Safety Code Section 11370.9 defines the specific crime of money laundering that is connected with drug sales.

Most people who handle proceeds that came directly from illegal activity will attempt to conceal the source of the money. This crime is known as “money laundering” as defined under Penal Code 186.10, which describes a broad range of behavior.

However, when this illegal activity involves selling controlled substances, then a suspect could be prosecuted for money laundering described under Health & Safety Code 11370.9.

Laundering money from selling drugs is similar to Penal Code 186.10 money laundering, but to be charged with HS 11370.9, the money must be related to a drug crime and the total amount of money that was laundered has to be more than $25,000 within a 30-day period.

Also, unlike a traditional PC 186.10 money laundering charges, the money doesn't have to go through a bank or any other financial institution.

An example includes a situation where a drug dealer is acquiring huge amounts of cash from his drug sales and he is seeking a way to conceal the source of all the money. He starts a car repair business and then uses the accounting books for his new business to conceal the real source of his drug proceeds.

In this scenario, he could be charged with HS 11370.9 money laundering.

Please review our page on possession of drug money – a violation of Health and Safety Code Section 11370.6 – for a discussion of the related, but distinct, offense of possessing drug proceeds.

To give readers more useful information about money laundering connected to drug sales, our Los Angeles criminal defense attorneys are providing a review below.

Under Section 11370.9, conversely, the conduct which is being addressed is using drug proceeds for various unlawful purposes.

In order to be convicted of HS 11370.9 money laundering in connection with drug crimes, the prosecutor must be able to prove all the elements of the crime:

There are several related California offenses for Health and Safety Code 11370.9:

Health and Safety Code Section 11370.9 violations are so-called wobblers under California law.  A wobbler can be prosecuted at the discretion of the prosecutorial agency as either a misdemeanor or a felony.

This important decision can be potentially influenced through a successful prefiling intervention by a defense attorney. Whether the crime is filed as a felony or a misdemeanor has a substantial impact on the defendant's maximum exposure if found guilty.

In a misdemeanor Section 11370.9 prosecution, the maximum sentence in one year in the county jail. In a felony prosecution under the same section, conversely, the defendant is exposed to two, three, or four years in the California state prison.

Given the financial nature of Section 11370.9 violations, a hefty fine is also part of the defendant's potential exposure. The defendant can be fined up to $250,000 or twice the value of the proceeds involved in the transaction at issue, whichever is greater.

As each transaction constitutes a separate offense of Section 11370.9 which can be prosecuted against the defendant, these fines can add up to many millions of dollars very quickly.

Section 11370.9 does include a limiting provision based on the timing and amount of the drug transactions or money laundering activity at issue. As stated above, Section 11370.9 only applies to a transaction or series of transactions which total over $25,000 within a 30-day period.

Again recognizing the Sixth Amendment right to counsel afforded to all criminal defendants, Section 11370.9 explicitly states that it is not intended to apply to legal fee transactions between drug defendants and criminal defense attorneys.

Accordingly, defense attorneys can represent, advise, and counsel their clients who are being investigated for or charged with drug sales offenses without fear of themselves being charged under Section 11370.9 for facilitating a transaction involving alleged drug proceeds.

As you can see, Health and Safety Code Section 11370.9 is primarily directed at punishing those who engaged in secondary transactions – that is, transactions involving drug money rather than the actual drug transactions themselves.

Much of Section 11370.9 is directed at money laundering activity, which by its nature requires proof that the defendant knows about the elicit nature and source of the money and intends to assist in concealing it by engaging in secondary transactions.

The major issue in Section 11370.9 prosecutions, and by extension often the most fruitful avenue of defense, is the defendant's knowledge and intent.

For example, a bank which happens to accept cash from a drug dealer and pay the dealer interest and facilitate check or credit card transactions using the elicit funds cannot realistically be expected to know about the illegal source of the money given the seemingly legitimate nature of the deposits.

A financial firm which knows its client is a drug dealer and specifically structures transactions to avoid reporting requirements, however, should expect to be prosecuted under Section 11370.9.

If you or a family member is under investigation for or has been charged with the serious financial drug crime of engaging in unlawful drug proceed transactions under Health and Safety Code Section 11370.9, contact our experienced criminal defense attorneys for an initial consultation.

We can protect your rights and help secure the best possible outcome for you or your loved one.