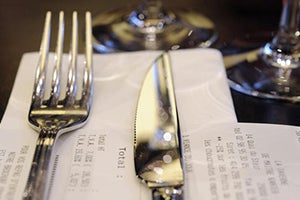 Penal Code 537 PC defrauding an innkeeper is defined as using fraud to obtain a good or service from a business without paying for it.

There are many types of California theft crime statutes, including California Penal Code 537 which makes it a crime defraud an innkeeper. These type of charges can become even become a felony offense, which will depend on the total value of the theft.

Defrauding an innkeeper includes a wide range of crimes – without paying for good or services - such as eating at a restaurant or staying at a hotel.

For instance, let's say you order and eat a meal at a restaurant and tell the waiter you need to get your wallet out of the car in to pay for it.

Rather, you just drive away without paying and never had intent to pay in the first place. Skipping out of a restaurant without paying is one of the most common forms of Penal Code 537 defrauding an innkeeper cases.

Yet another common PC 537 example includes a situation where you told a hotel clerk you would pay cash after staying in a room for a few days.

You may have run up the tab on room service and pay-per-view movies. Rather, you never had intent to pay and leave the hotel in the middle of the night.

If fact, with modern technology where paying for goods or services over the internet with stolen or expired credit cards is easy, defrauding an innkeeper crimes are quite common in California.

As stated, penalties for the theft crime of PC 537 are based on value of the services and goods taken without paying – and normally charged as either a petty theft or grand theft crime.

To give readers useful information on Penal Code 537 - defrauding an innkeeper charges, our California criminal defense attorneys are providing an overview below.

Definition of PC 537 Defrauding an Innkeeper

California Penal Code 537 defines the theft crime of defrauding an innkeeper as follows:

In order for a prosecutor to find you guilty of Penal Code 537, defrauding an innkeeper, they must be able to prove – beyond reasonable doubt – all the elements of the crime, including:

It should be noted a prosecutor could also attempt to show that you obtained some type of credit from a business, such as a hotel, using false pretenses.

The term “defraud” or “false pretense” simply means you used tricks, deceit, or misrepresentation in order to obtain anything of value.

The related California crimes to Penal Code 537 defrauding an innkeeper include:

Penalties for Defrauding an Innkeeper

If you are convicted of Penal Code 537 defrauding an innkeeper, punishment is based on the on the total value of the services or goods taken without paying.

Defrauding an innkeeper could be charged as either a petty theft or grand theft and will always depend of the amount of loss suffered by the victim.

If you are convicted of misdemeanor petty theft charges - meaning the value of the loss was $950 or less, it will carry the following penalties:

If the total value of the goods or services is greater than $950, you will be charged with grand theft, a “wobbler,” meaning the case could be filed as either misdemeanor or felony offense.

The decision on how to file the case will normally depend on your criminal record. If you have a prior conviction for Penal Code 537, you will probably be facing a felony case.

If you are convicted of felony grand theft, it will carry the following penalties:

If you are convicted of misdemeanor grand theft, you will be facing up to one year in county jail and a fine.

Our Los Angeles criminal defense lawyers can use a wide range of strategies in order to obtain the most favorable outcome on your case. Of course, each PC 537 case is unique and will require a close review of the details.

The common defenses include:

Lack of Intent to Defraud

If you go back to the definition of PC 537 defrauding an innkeeper, you will see that you can't be guilty of this crime unless there was an “intent to defraud.” Our lawyers might be able to make a reasonable argument this required element of the crime doesn't exist.

Perhaps we could show there was not a willful criminal intent. Maybe you were distracted by your children, in the middle of a stressful event, or on an important phone call at the time you were required to pay for your services. In other words, it was not on purpose, rather an oversight.

We might be able to argue you didn't commit a PC 537 defraud an innkeeper on purpose – rather it was an honest mistake – with no intent to financially harm.  Of course, this defense is only available in limited situations.

If you have been accused of defrauding an innkeeper in violation of California Penal Code 537, you should contact our Los Angeles criminal defense attorneys to take a close look at all the facts and circumstances of the case.

We have a record of success in all type of theft-related cases and may be able to negotiate with the prosecutor for a lesser charge of even a case dismissal through pre-filing intervention.