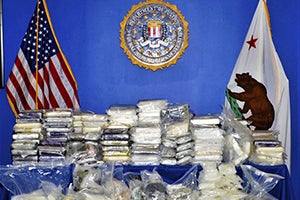 21 U.S.C. § 846 is a common statute used by federal prosecutors for all types of drug-related criminal conspiracies.

Federal criminal prosecutions that involve drug distribution often include accusations under 21 U.S.C. § 846, which is the common statute used for all types of drug-related criminal conspiracies.

It should be noted that conspiracy charges are a frequently prosecuted crime in federal criminal courts.

The concept of a conspiracy charge is an underlying criminal agreement between two or more people to commit a crime.

In simple terms, a conspiracy has three primary elements:

In any federal conspiracy case, there has to be an agreement between people to commit a crime.

If the intended crime of the conspiracy is to sell narcotics prohibited under federal law, then a federal prosecutor can charge the members of the conspiracy, commonly known as “co-conspirators,” with a violation of Section 846.

If you have been accused of being a member of a drug conspiracy, you need to call our law firm to discuss your case.

Description of a Drug Conspiracy

It should be noted that members of a conspiracy don't have to know all the specific details, but they must know and make an agreement to participate in illegal activity.

Further, they don't even have to know the identity of all the other members.

While many conspiracies will involve an express agreement – where people will have a discussion over how to traffic drugs – it's sufficient for a prosecutor to prove implicit agreement.

This means there is no doubt based on the circumstances that all parties were planning to actually execute a crime, even in cases where they may have not stated it explicitly.

Therefore, members in the conspiracy could find themselves being charged with a federal offense even in a situation where they were not a primary participant in the actual crimes that were committed.

It's not uncommon that the crime itself, which is the main object of the criminal conspiracy, is never successfully completed.

In a many drug conspiracy cases, the person on one side of the transaction, the buyer or seller, is a cooperating witness or even a member of a federal law enforcement agency.

This means that not only is the drug deal never actually completed, but it's factually impossible the drug sale would ever have occurred.

Regardless, drug conspiracy charges can still be filed against:

It's critical to note that the primary element of a conspiracy is an agreement.

The prosecutor will have to be able to prove the existence of this agreement beyond a reasonable doubt. Drug conspiracy and attempt is part of the Controlled Substances Act.

Overt Acts in a Federal Drug Conspiracy

In addition to an agreement and intent to commit the offense, a conspirator has to take overt acts in furtherance of the conspiracy.

In a Section 846 filing in federal court, the indictment will contain a list of specific certain overt acts which every member of the charged conspiracy is alleged to have undertaken.

The steps could be:

This means that it's a valid legal defense in a drug conspiracy charge that the defendant decided to abandoned the conspiracy before the actual crime was attempted.

In other words, if a co-conspirator breaks the agreement which originally formed the conspiracy, the larger conspiracy could still remain active.

However, the defendant who made the decision to abandon it will not be responsible for additional future crimes that are committed by the remaining members.

In actual federal crime practice, federal drug conspiracies under 21 U.S.C. § 846 have to relate to interstate commerce.

The scope of federal jurisdiction is almost limitless with regard to drug crimes.

However, the reality is that only the following will typically warrant a federal drug conspiracy prosecution:

It should be noted that the vast majority of low-level drug sales involving personal-use quantities that are not connected to additional criminal activity will be prosecuted by the local state criminal courts.

A major factor in federal drug conspiracy charges is the impact of the federal sentencing law.

There are mandatory minimums and high offense levels in the federal sentencing guidelines for a drug crime – especially in cases that involve large quantities of narcotics.

This means that a defendant who is found guilty in a federal drug conspiracy case, could potentially be exposed to a substantial number of years in federal prison. Further, a conviction could lead to forfeiture of property.

Additionally, due to the nature of the offense, most defendants who have been charged with these type of drug offenses, will also face an extensive investigation from federal law enforcement agencies – which will typically include video and audio recordings of the actual alleged drug sales activity.

This is just another reason you will need legal representation by a federal defense lawyer who can effectively negotiate the best possible settlement agreement with the prosecutor.

In summary, a federal drug conspiracy charge under 21 U.S.C. § 846 should be considered a serious federal crime because it will expose you to a substantial time in federal custody.

The key to obtain the best possible outcome on your case could rest on your decision to have an experienced federal criminal defense attorney intervene into your case early in the process – including plea negotiations with the government.

In certain federal drug crime cases, motions to suppress based on violations of your Fourth, Fifth, and Sixth amendment rights are often necessary make a challenge against the prosecutor's case.

If successful, it could exclude key evidence against you at trial.

Whether your drug conspiracy case ultimately settles or proceeds to trial, experienced legal counsel will be required.

If you have been accused of being involved in a federal drug conspiracy, our federal criminal defense law firm can discuss the details of your situation and let you know the necessary steps to move forward in an effort to obtain a favorable outcome.