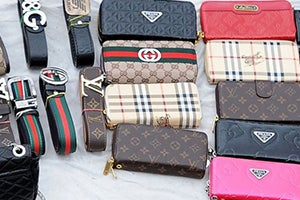 California Penal Code 350 PC makes it a crime to manufacture, sell, or possess for sale, any counterfeit trademarks.

The term “goods” covers many different items, such as purses, handbags, wallets, sunglasses, clothing, among others.

In most cases, these goods are manufactured overseas, but are sold in the United States.

With the high popularity of luxury goods and famous brand names, especially in Los Angeles, there is a huge underground market for a wide range of products that features infamous logos,

In many Penal Code 350 cases, arrests occur after large companies hire private investigators to hunt down offenders who advertise on craigslist and social media.

These investigators will make undercover purchases and then report the activity to police.

A common example of a PC 350 crime includes situation where someone sells inexpensive sunglasses at a flea market.

In order to charge more money, they attach a famous name brand logo on the sunglasses to make them appear genuine, but they could face be prosecuted for manufacturing and selling counterfeit marks.

It should be noted that in order for a prosecutor to convict you of PC 350, they will have to prove you willfully manufactured - knowingly possessed for sale- and then intentionally sold – counterfeit items.

To give readers useful information about making or selling counterfeit good under Penal Code 350, our California criminal defense lawyers are providing an overview below.

California Penal Code 350 defines the crime of manufacturing or selling counterfeit marks as:

In order for the prosecutor to obtain a conviction for PC 350 manufacturing, selling, or possession for sale of counterfeit goods, they will have to prove - beyond a reasonable doubt – all the elements of the crime:

It should be noted that knowingly possessing a counterfeit good means you knew or had a reason to believe it is counterfeit.

It's not unlawful to simply possess counterfeit goods – rather - you need to have possessed the goods with intent to sell them.

A counterfeit mark means a fraudulent trademark that is an identical mark registered with the United States Patent and Trademark Office or the California Secretary of State.

If convicted of PC 350 manufacturing or selling counterfeit marks, the punishment will depend on the amount and value of the counterfeit goods.

If the number of counterfeit goods is more than 1,000 items, or the total value is greater than $950, then PC 350 is a California “wobbler,” meaning the prosecutor has the discretion to file the case as either a misdemeanor or felony crime.

If convicted of Penal Code 350 selling, manufacturing, possessing for sale of counterfeit goods as a felony, it carries the following penalties:

It should be noted that if you are convicted of Penal Code 350, the court will normally order asset forfeiture of all counterfeit marks, machines used to manufacture or assemble them, and vehicles that were used to transport them. If you have a prior conviction for PC 350, you will face a more severe penalty.

If you have been accused of PC 350 making or selling counterfeit good in violation of California Penal Code 350, our criminal defense lawyers can use a wide range of strategies in order to obtain the best possible outcome on the case.

Clearly, every case is unique and will first require a close examination of all the facts and circumstances in order to develop a game plan for a favorable outcome.

The most common defenses include:

On a similar note, maybe you didn't know the goods were counterfeit, rather authentic. Often, they are so well crafted it's difficult to tell the difference.

Authentic Goods or Lack of Seal

We might be able to make an argument the goods the prosecutor is claiming to be counterfeit is actually genuine – or – we could argue it can't be proven beyond a doubt the goods are actually a counterfeit. On a similar note, maybe we could argue the goods didn't contain a seal registered with the U.S. Patent & Trademark Office.

We might be able to make an argument the police committed an illegal search and seizure that violated your Fourth Amendment right and submit a motion to suppress to prevent the use of the seized evidence in court.

On a similar note, maybe we can argue police obtained incriminating statements that violated your Miranda rights.

If you were accused of Penal Code 350 making or selling counterfeit goods, contact our Los Angeles criminal defense lawyers to review the details and options.

We have a track record of success in all type of theft crime related crimes.