As with other types of crimes, such as burglary, assault, or murder, the State of California categorizes robbery by degrees of severity.

First-degree robbery, defined under Penal Code 212.5 PC, is considered the most severe and is subject to the harshest penalties. If you're convicted of this crime in California, you could face up to 9 years in state prison.

A first-degree robbery is any robbery when the victim is a driver or passenger of a bus, taxi, subway, or other transportation for hire; a robbery occurs in an inhabited structure (home) or at an automated teller machine (ATM).

The term “inhabited” at a structure means that someone lives at the location and not whether they are present at the time of the robbery.

PC 212.5 says, “(a) Every robbery of someone performing their duties as an operator of any bus, taxicab, cable car, streetcar, trackless trolley, or other vehicle…used for the transportation of persons for hire, or robbery of any passenger or perpetrated in an inhabited dwelling house is robbery of the first degree.”

Further, subsection(b) says that every robbery that occurs on someone while using an automated teller machine or immediately after and still in the vicinity of the ATM is also a robbery of the first degree.

Under California Penal Code 211 PC, robbery is defined as the felonious taking of personal property in someone's possession, from their immediate presence, and against their will using force or fear. Other related crimes include Penal Code 487 PC grand theft and Penal Code 484 PC petty theft.

Under PC 212.5, any robbery that does not fall into the definition of a first-degree robbery will be considered a second-degree robbery as defined under subsection (c). Let's review this California state law in further detail below.

As noted above, in California, "robbery" is generally defined in Penal Code 211 PC as "the felonious taking of personal property in possession of another, from his person or immediate presence, and against his will, accomplished using force or fear." In other words, what classifies the crime as robbery (versus burglary or other forms of theft) is that:

Under California law, these are the only forms of first-degree robbery. All other instances are classified as second-degree robbery. Penal Code 212 PC defines the term "fear" as it's used in the crime of robbery.

EXAMPLE 1: John hides behind a bush by an ATM. When a woman makes a withdrawal from the ATM, John jumps out from behind the bush, pulls the cash out of her hand, and runs. John can be charged with first-degree robbery. 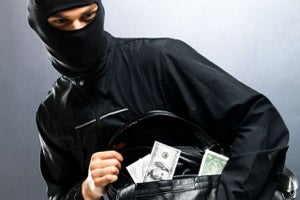 EXAMPLE 2: Paul sits beside a woman on the subway wearing a pearl necklace. Paul yanks the chain off her neck at one of the stops and runs off the subway. Paul is guilty of first-degree robbery because the robbery took place on public transportation.

EXAMPLE 3: The same scenario as example 2, except Paul follows the woman from the subway to her apartment, forces his way inside, grabs the necklace, and runs. Paul is still guilty of first-degree robbery because the robbery took place in a residence.

EXAMPLE 4: A woman places her purse next to her on a park bench. Sophia sees the purse, snatches it, and runs off.

Sophia can be charged with second-degree robbery because the crime didn't occur on hired transportation, at an ATM, or in someone's home.

What Are the Legal Penalties?

First-degree robbery is a felony in California. It is also a qualifying violent crime under California's "three-strike law." If you're convicted of this crime, the maximum penalty varies based on the circumstances and may be subject to sentencing enhancements:

Just because you've been charged with first-degree robbery doesn't mean a conviction is inevitable. There may be defenses available to you that can help get the charges against you reduced or even dismissed. Some of the most common are discussed below.

Perhaps we can argue that you didn't use force or fear. Prosecutors must demonstrate the use of force or fear to prove that you committed robbery. If, for example, the victim handed over the property willingly without coercion, you may be able to get the charge dropped.

Perhaps we can argue that the structure was uninhabited, or you didn't know it was inhabited. For example, this defense might reduce the charge from first-degree to second-degree robbery.

Perhaps we can argue that you are the victim of mistaken identity. Since robbers frequently disguise themselves with masks, etc., it's not uncommon for a victim or witness to mistakenly point the finger at you if you look similar to the robber.

Your attorney may be able to demonstrate they "got the wrong person" (for example, if you have an alibi). Maybe the allegations are false.

Perhaps negotiation with the prosecutor is possible to get reduced charges or a case dismissal. Maybe prefiling intervention can convince the prosecuting agency not to file formal criminal charges, called a “DA reject.”

The criminal defense lawyer at Eisner Gorin LLP is located in Los Angeles, California. You can contact us for a case evaluation by phone or fill out the contact form.