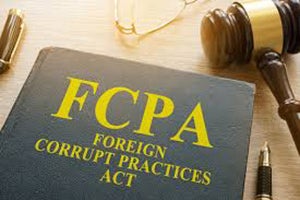 Foreign Corrupt Practices Act makes it a crime to bribe foreign government officials to obtain business in their country.

The Foreign Corrupt Practices Act (FCPA) was passed by Congress in 1977 to make it unlawful for certain classes of people and entities to make payments to foreign government officials to assist in obtaining or retaining business.

The FCPA includes anti-bribery provisions and books and records provisions that criminalize:

The FCPA “anti-bribery” provisions prohibit people and entities and individuals from:

The FCPA "books and records" provisions prohibit anyone from:

It should be noted the Foreign Corrupt Practices Act is a wide-ranging law and interpreted broadly by the U.S. Department of Justice.

It should also be noted that it's not uncommon for companies to start internal investigations associated with the Foreign Corrupt Practices Act.

These type of criminal investigations are very serious, with potentially devastating consequences for the company employees.

Internal FCPA investigations are normally handled by outside lawyers who will report to an audit committee and upper-level management.

If you are the target of a federal investigation involving the FCPA, you need to seek legal representation from an attorney with experience in dealing with these type of federal crimes.

There are questions that remain about what exactly constitutes bribery and corruption and what people or businesses need to do to be in compliance with FCPA laws.

A federal criminal defense attorney who is experienced with the Foreign Corrupt Practices Act and other anti-bribery legislation can thoroughly review your alleged FCPA violation and guide you through the complex federal court process.

To give readers a better understanding of the Foreign Corrupt Practices Act and what you are facing, our federal criminal defense lawyers are providing an overview below.

What Does the Foreign Corrupt Practices Act Do?

It should be noted the FCPA applies to U.S. citizens and businesses and foreign businesses listed on the U.S. Stock Exchange and who conduct their business within the United States.

The FCPA prohibits a business from:

This type of third-party transaction could be considered a form money laundering.

Thus, the primary purpose of this law is largely to prevent U.S. corporations from bribing foreign officials.

The FCPA has accounting language that requires public companies to maintain records that show their transactions.

The FCPA applies to “issuers,” who is typically a domestic company that has securities traded or required to submit filings with the Securities and Exchange Commission.

A domestic concern is normally a company within the United States, or a person who is a resident or citizen.

However, as stated above, the FCPA also applies to foreign people and foreign firm if they meet certain jurisdictional requirements.

The term “anything of value” is wide-ranging and covers many types of payment, such as:

The term “obtain or retain business” is usually connected with government contracts, but the federal statute also prohibits a wide-range of business activities.

The FCPAs accounting provisions requires “issuers” to keep honest and accurate records of accounts and financial transactions, commonly known as the “books and records” provision.

Companies are required by law to maintain oversight make sure assets are appropriately used and to prevent fraud, corruption, and bribery.

The FCPA is enforced civilly by the Securities and Exchange Commission.

Criminal penalties are enforced by the United States Department of Justice.

Additionally, any person or business found in violation of the FCPA could be prohibited from conducting further business with the federal government.

Criminal penalties for a Foreign Corrupt Practices Act violation by an individual includes:

This includes employees, stockholders, and management.

FCPA penalties for violations by a business include:

CPA violations include fines of:

For individuals, including officers, directors, stockholders, and employees, the criminal penalties include:

How an investigation FCPA proceeds differs greatly as it will depend on if the target is an individual or a business.

FCPA investigations involving a business won't result in criminal charges, rather they normally reach a settlement agreement before court action is taken.

Federal criminal charges under the Foreign Corrupt Practices Act are more likely to be pursued against an individual, including any officer, director, employee, or agent of an issuer or stockholder who was acting on behalf of such issuer, who willfully violates the anti-bribery provisions.

Our federal criminal defense lawyers will thoroughly review the alleged FCPA violating in order to determine an appropriate strategy to fight the case.

One affirmative defense is that the payments were lawful under the written laws of the foreign official's country.

The other is that the payment was a “reasonable and bona fide expenditure,” like travel expenses on behalf of the foreign official and it related to promotion of products or services or executing a contract with a foreign government.

Other potential defenses include that an individual didn't have any knowledge there were unlawful payments, or they were made in good faith.

However, it's important to note that every Foreign Corrupt Practices Act case is unique and effective defenses will always depend on the specific facts and circumstances of each case.

Early intervention into your case can be crucial and our lawyers may be able to help you avoid prosecution.