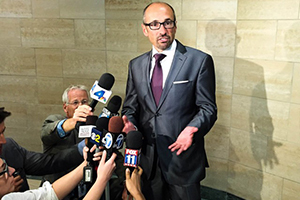 Criminal lawyer Dmitry Gorin is an experienced legal analyst in the area of criminal law.

Dmitry Gorin is a media legal analyst, television commentator, and educator to other lawyers in the area of criminal law, police procedure, and court defense strategy.

Mr. Gorin is a former District Attorney, a law professor, and has been devoted to handling criminal law issues for over 25 years.

He has also authored numerous articles on criminal defense issues in legal publications, and has instructed other lawyers on trial and deposition advocacy, high-profile cases, and representing victims of crime.

Print media describes him as an “expert” in the field of criminal law and defense.  He has discussed the prosecution of high-profile individuals facing sex crime accusations including Harvey Weinstein, Kevin Spacey, Bill Cosby, and others.

He also worked with HBO on the production of the Phil Spector bio-epic, created by David Mamet, and is regularly contacted by writers and producers seeking to consult on television and movie script ideas.

If you are a producer, journalist, or studio executive, in need of a televised interview or technical consultation, please feel free to contact Eisner Gorin LLP to discuss Mr. Gorin's availability.

Attorney Dmitry Gorin's expertise as a television analyst and commentator is also demonstrated by his years of instructing other lawyers, sharing with them his prosecutor and defense experiences in addressing complicated criminal law issues. Dmitry has regularly instructed other lawyers in the area of criminal defense throughout Los Angeles and to numerous Bar Associations.