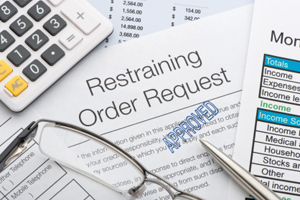 California Penal Code 273.6 PC, makes it a crime for someone to violate the terms of a court-issued restraining order,

Los Angeles restraining orders are commonly known as protective orders, no-contact orders, and stay away orders. They are typically connected to a domestic violence case. Restraining orders are issued when the court decides that an individual must not have any contact with another person.

If someone, such as a spouse, has inflicted injury, threatened to cause injury, stalked, harassed, or even annoyed another individual, the court can issue a restraining order in order to restrict any contact.

A common example would be in a domestic battery, when the husband may have caused injury to his wife during an argument. The restraining order itself is not a criminal offense, but if an individual violates the order, they could face a misdemeanor charge. Consult with a Los Angeles restraining order violation attorney at our law firm for more information about your case.

How to Obtain a Restraining Order in Los Angeles

Restraining orders are typically obtained by filing a restraining order with the court, or they are issued during the domestic vviolence criminal court process. Forms for the different types of restraining orders can be found at the website of your local Los Angeles County courthouse. Many courthouses also offer assistance in filing the appropriate documents.

Under California Penal Code Section 273.6, it's a criminal offense to violate a restraining or protective order. In order for an individual to be charged with violation of a restraining order, the prosecutor must prove the following elements of the crime:

A very common example of a Los Angeles restraining order violation occurs at a criminal court arraignment for a domestic violence case. The judge orders the husband to stay away from his wife. He is provided with a written copy of the restraining order. In order to comply, he moves in with a member of his family.

A few weeks later, his wife calls and wants to reconcile their relationship. He moves back to his home and they soon start fighting again and she calls the police. In this example, he could be prosecuted for violating the restraining order even though he was not convicted of domestic violence and invited back to his home.

Typically, violation of a restraining order is a misdemeanor crime that can carry up to a one year sentence in Los Angeles County jail and a fine up to $1,000. The court may also order mandatory counseling and domestic abuse classes. If you caused an injury to the protected person during the violation, the fine can be $2000.00 and you will be required to serve a minimum of 30 days in jail.

If you have a prior conviction for violating a restraining order in Los Angeles and if the violation involved violence or even just the threat of violence, it can be filed as either a misdemeanor or felony crime. If convicted of a felony offense, you could face up to three years in a California state prison.

Defending against a restraining order violation in Los Angeles can be complicated. However, it's possible there is a valid innocent explanation. A Los Angeles restraining order violation attorney may be able to show the violation was not intentional. For example, even though you were ordered to have no contact with your wife, you accidentally came into contact with her at a public place, such as a grocery store.

Our lawyers may be able to show the court you were not given proper legal notice. By California law, you have to be given notice that an order was issued against you.

You can't be charged with violating a restraining order if you don't know about it. Our attorneys would have to be prove that it was improperly addressed, or was handed in person by mistake to someone else. Our lawyers may also be able to show you were not in court when the judge granted it.

Our Los Angeles restraining order violation lawyers may be able to show that the order itself was not valid. For example, you may have been ordered to not come within 100 yards of your neighbor, but you have a shared pathway with them and the restraining order should have not been issued as it's impossible to comply. Our Los Angeles criminal defense law firm secured case dismissals of two separate cases of violating a civil harassment restraining order in the LAX Airport Courthouse.

Our lawyers know that once a family member makes an accusation of domestic violence, the Los Angeles police are legally bound to investigate, even if the accuser changes their story. It's not uncommon for someone to make false accusations during the heat of an argument. This means it's possible to get arrested and prosecuted without committing any type of crime.

Therefore, if you are charged with violating a restraining order, call our criminal defense law firm to get a skilled lawyer fighting on your behalf. We provide immediate response by calling 877-781-570.