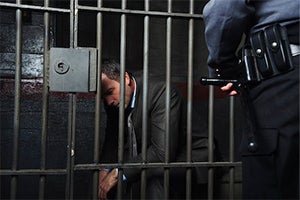 Extradition into California is when a fugitive wanted by the state criminal court is extradited from another state or country back to California.

The court in which the criminal case was filed retains jurisdiction over the charges against the defendant who is no longer in the jurisdiction and the defendant's personal presence is required before the case can be resolved.

This creates the problem of how to hail an out-of-state defendant back into court in the jurisdiction in which the alleged crime occurred.

People who have an extradition warrant are commonly known as a "fugitive from justice."

Extradition into California is the process where a fugitive wanted by the state criminal court is extradited from another state or country back to California.

Most often, this is due to the individual violating the terms of their:

The extradition process addresses this problem. The 50 states all have a mutually binding agreement to hold a defendant who is charged in the state criminal courts of the other states, upon request by the charging state, until a pickup can be accomplished and the defendant can be transported back to the jurisdiction which has authority over the case.

Under California extradition laws, the Governor can bring back a fugitive from justice to stand trial, face sentencing, return to jail, or for a hearing on their alleged probation or parole violation.

To give readers useful information about extradition warrant, our California criminal defense lawyers will review below.

California signed onto the “Uniform Criminal Extradition Act,” that require someone arrested in another state to be returned to California to face their criminal charges.

However, before someone can be extradited, there must be a court hearing to make sure the warrant is valid.

The court decides whether the person in custody is in fact the:

During this period, the person remains in custody and this process typically takes several weeks to resolve.

There are several considerations which are of common concern to defendants facing extradition, and to their family members. The first is timing.

Unlike with an in-jurisdiction arrest, meaning an arrest by a local agency located in the same area in which the court case is located, the defendant will almost certainly not be arraigned and processed through the system within 48 hours.

The defendant has several options.

The first is to “waive,” extradition, meaning to:

In other cases, the defendant may have a sufficient basis to challenge the extradition.

The most common grounds for challenging extradition is identity. In a country of hundreds of millions of people, it is not unheard of for someone with the exact same name and date of birth to be falsely accused of a crime committed out of jurisdiction by someone else.

In these cases, the defendant would assert their right to a formal extradition hearing at which the government would have the burden of proving that they are in fact the individual sought by the requesting state.

A common misconception is that the merits of the underlying criminal case in the requesting state are at issue at an extradition hearing. They are not.

The defendant may very well have a viable defense to the underlying out-of-jurisdiction case such as self-defense, an alibi, reasonable doubt, or another defense.

Unfortunately, the defendant must still be extradited and then assert those defenses in state court in the arresting state.

Unlike arrests in in-jurisdiction criminal cases, the defendant typically does not have the right or the ability to simply post cash bail and secure their release from law enforcement's custody.

This is a common sense rule in that extradition implies that the defendant travelled at least some distance across state lines after committing a crime.

Knowing that another state's authorities are attempting to arrest the defendant, the chances of flight are high if the defendant would be released from the arresting state's custody.

However, an experienced criminal defense attorney can make contact with the prosecuting agency in the requesting jurisdiction.

Again, the requesting state is the party with the interest in the defendant's custody status.

The arresting state's judge will generally be amenable to approving any conditions of release which the requesting state is comfortable with.

Even in situations where the demand for your extradition was granted, our criminal attorneys can provide you with legal representation to make sure your rights are not violated.

We can also make arguments for your release on bail while waiting for extradition, or even negotiate for reduced bail or an OR release so you can return to California.

If you or a family member has been arrested for a criminal offense in an out-of-state jurisdiction and require defense counsel to navigate the extradition process, contact our team of experienced Los Angeles criminal defense attorneys for an initial consultation.

We have decades of experience in representing California residents who are facing interstate extradition.

Eisner Gorin LLP is a top-rated criminal defense law firm with a track record of success.