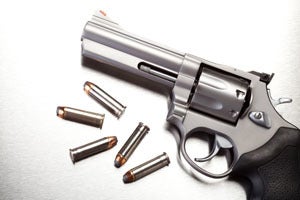 Penal Code 487(d)(2) grand theft of a firearm occurs when someone takes a firearm that has a value exceeding $950.

Grand theft firearm is covered under California Penal Code Section 487(d)(2) and commonly known as “GTF.” It's a type of grand theft offense where the property involved is a firearm.

According to PC § 487(d)(2), all thefts of a firearm are classified as “grand thefts, “ and in spite of the circumstances, the Los Angeles County prosecutor will charge it as a felony offense.

After Proposition 47 was passed in 2014, thefts of firearms are now known as grand theft firearm if the value of the firearm is worth $950 or greater, or you have a prior conviction for a sexual related offense in California that required you to register as a sex offender, or a conviction for other specific types of felony crimes.

The main criminal element of the crime of grand theft firearm is the intent to deprive the owner of their firearm. If the prosecutor is not able to prove intent, beyond any reasonable doubt, they can't obtain a conviction for a violation of Penal Code Section 487(d)(2).

This is described as taking another person's firearm without their consent and with the intent to permanently deprive the owner of their firearm, while moving it to another location for any amount of time. As you can see, the key element for a GTA offense is always intent.

If you have been accused of grant theft firearm, you need to consult with a Los Angeles criminal defense attorney at Eisner Gorin LLP. If convicted, you could be facing harsh legal consequences, including a “strike” under California's three strikes law.

Now that we have covered a general overview of a grand theft firearm crime, let's take a closer look at the legal definition, penalties, and potential legal defenses below.

It's important to note there are specific elements of the crime that must exist before you are charged with grand theft firearm.

First, as stated above, the firearm that was stolen must be valued at more than $950, or you have a prior conviction for certain California crimes.

The prior convictions include the following:

As you can see above, it should be noted that specific prior convictions can change theft of a firearm valued under $950 into grand theft firearm offense.

Additionally, many of the prior convictions have no connection to a theft crime. This is the result of California Proposition 47.

As described above, the most common example of where you would be charged with a grand theft firearm offense is theft by larceny of a firearm, which is legally described as follows:

Once again, as you see in the above description, the key for a GTF crime is “intent.”

It should be noted when you took the firearm, you must have intended to keep it from the owner just long enough to deprive the owner of the value and you moved it to another location, even if it was just a short distance for a brief amount of time.

If you need additional information, call a Los Angeles criminal defense attorney at our law firm.

Another way where you could be charged with grand theft firearm includes theft by false pretenses. This means you used fraud to take someone's firearm, which is commonly known as false pretenses.

It's a crime when you deceive the gun owner into allowing you to take their firearm, and the owner only allowed you to take it based on the information you provided.

The crime of grand theft firearm by false pretenses is legally described as follows:

It should be noted that you commit a false pretense if you state something you know to be false, claim something is true when there is no reason to believe it, fail to give someone information you have an obligation to provide, or you promise someone something with no intent to keep it.

However, in grand theft by trick, the owner only allows you to take possession of the firearm, with no intent to take ownership.

Another way where you could be charged with grand theft firearm includes theft by embezzlement. The means the owner of the firearm trusted you, but you fraudulently use the firearm for your own benefit and deprive the owner the use of their firearm.

The crime of theft by embezzlement of a firearm is legally described as follows:

It should be noted you are considered to have acted fraudulently when you take advantage of the owner of the firearm, or you caused the owner the loss of it by breaching their trust.

It's possible to still be charged with theft of a firearm by embezzlement even if you intended to return the firearm to the owner.

If you have any questions about a GTF offense, call our Los Angeles criminal defense attorneys.

If you are convicted of violating California Penal Code Section 487(d)(2), grand theft of a firearm, it's always a felony offense.

Legal penalties for grand theft firearm conviction include felony probation, 16 months to 3 years in a California state prison and a fine up to $10,000.

Additionally, grand theft firearm qualifies as a serious felony under California's Three Strikes Law. This means if you are convicted of grand theft firearm, or another qualifying offense, and then commit another felony crime, you will receive double the sentence of the second offense.

If you commit a third felony, known as a  “strike,” the sentence is 25 years to life in a state prison.

There are a variety of potential legal defenses available to our Los Angeles criminal defense lawyers.

Every case of grand theft firearm will have it's own set of unique circumstances, meaning our lawyers will need to closely review the details in order to develop an effective defense strategy for your case.

Lack of intent – As we have discussed extensively above, the Los Angeles County prosecutor must be able to prove intent. If they can't prove you had intent to steal the firearm, you can't be found guilty of grand theft firearm, under California Penal Code Section 487(d)(2).

If our lawyers are able to cast some reasonable doubt on this critical element of intent, you can probably avoid a conviction.

Reasonable belief you owned firearm – In some cases of GTF, our attorneys might be able to show you had a good faith belief you owned the firearm when you took possession, even if your belief was later proven wrong.

This is commonly known as the claim of right legal defense. Again, casting some doubt is the key as the prosecutor has the burden of proof to show you committed each and every element of the crime.

Firearm had a value of under $950 – In certain cases of grand theft firearm, our criminal attorneys might be able to show the total value of the stolen firearm was less than $950. If we are successful, your charges could be reduced to petty theft, which is a misdemeanor crime with reduced legal penalties.

False accusation – In some cases of grand theft firearm, our lawyer might be able to produce evidence you were falsely accused and wrongfully arrested. It's not uncommon for alleged victims to make false allegations against someone out of anger, revenge, or jealously.

If you have are under criminal investigation, or already charged with grand theft firearm covered under California Penal Code Section 487(d)(2), you need to consult with a Los Angeles criminal defense lawyer at Eisner Gorin LLP immediately.

Let our attorneys review the specific details in order to develop a strong legal defense on your behalf.