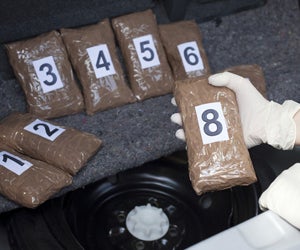 The California offense of drug trafficking involves the manufacture, transportation, or distribution of illegal drugs.

Criminal offenses related to drugs are harshly punished under both state and federal law, particularly when they involve the sale or distribution of drugs for commercial purposes.

The offense of drug trafficking is a particularly serious drug crime that involves the manufacture, sale, transportation, or distribution of illegal drugs, such as heroin.

Because of California's border with Mexico and port cities, law enforcement authorities are always on the lookout for potential drug trafficking activity.

In fact, the Counties of Los Angeles, Orange, Riverside, and San Bernardino are all designated as within the Los Angeles High Intensity Drug Trafficking Area (HIDTA) by the federal government since 1990.

California Health and Safety Code 11379 covers the sale or transportation of methamphetamine.

Therefore, if you are facing a state or federal drug trafficking crime, you need to consult with an experienced drug crime lawyer in Los Angeles at our law firm immediately.

A Drug Trafficking Conviction Can Result in Significant Penalties

While every drug trafficking case is different, people who are facing allegations of serious drug crimes are often facing extremely harsh legal consequences.

A person who is convicted of drug trafficking in Los Angeles may be looking at years in federal or state prison, substantial fines, probation, restitution, and a felony record.

In addition, because a drug trafficking conviction is generally a matter of public record, it can affect your life even after any court-imposed sentence has ended.

Consult with one of our attorneys for more information. Some of the collateral issues that can arise as a result of a drug trafficking conviction include the following:

Fortunately, if you are facing allegations of drug trafficking in Los Angeles County, there are often ways that a drug attorney can help.

A significant number of drug cases arise after the police conduct a search of a person's vehicle or home. For this reason, a common defense to drug trafficking allegations is arguing that the search somehow violated your constitutional rights.

Say, for example, you were driving a car with a broken taillight and got pulled over for that reason. Without any explanation, the police asked you to step out of the car and proceed to search your vehicle and find a significant amount of marijuana.

Additionally, the police did not have any reason to believe that you had drugs in your vehicle but were acting on a hunch that was based on your race, ethnicity, or the type of car you were driving. In most cases, this search would be deemed unconstitutional by a court, meaning that any evidence gathered during the search would be inadmissible in court.

In this hypothetical case, the Los Angeles prosecutor would likely be forced to drop the case due to a lack of evidence.

Some other defenses that may be available to an experienced drug trafficking defense attorney in Los Angeles on a drug related case include the following:

Importantly, even in cases in which there are no legal defenses available, an attorney can be of significant help.

Most criminal cases are resolved through the plea bargain process, which involves negotiating a deal with the prosecutor through which a defendant pleads guilty to a lesser offense or to the original offense of which they were accused in return for a recommendation for a lenient sentence.

This process generally involves legal negotiation, making it advisable for anyone seeking a plea bargain to do so through the representation of a criminal defense lawyer.

If you have been accused of drug trafficking anywhere in Los Angeles County, or any other offense related to the manufacture, sale, or possession of illegal drugs, you should call an attorney as soon as possible.

The experienced lawyers at Eisner Gorin LLP are committed to protecting the rights of the accused and will fight tirelessly to ensure that your case is resolved as well as possible.

For a free immediate response with one of our attorneys, call our drug lawyers today at 877-781-1570 or contact our law firm online.