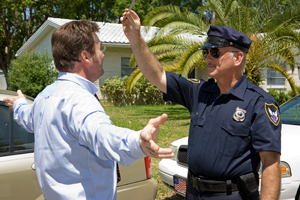 Field sobriety tests are used by police to determine whether there is probable cause someone is driving under the influence.

Field Sobriety Tests, or FSTs, are an investigative tool used by law enforcement to determine whether there is probable cause to believe a driver is under the influence of alcohol and/or drugs.

Unless a driver is on probation or under the age of 21, these tests are entirely voluntary.

Although the officer may not say so, the driver can choose not to participate in these tests.

Furthermore, the fact that the driver chooses not to participate in these tests cannot be used as evidence that he was under the influence.

On the other hand, the driver's performance of these tests can and almost certainly will be used as evidence against him in a DUI case.

See our blog: Can You Pass the DUI Field Sobriety Test?

This includes something called nystagmus. Nystagmus refers involuntary movement of the eyes.

Scientific research has shown that alcohol intoxication can cause nystagmus, particularly when the eyes are shifted to the left and right. Officers will ask that the driver follow an object, usually the tip of a pen, with their eyes.

The officer will then look for the presence of nystagmus prior to the 45 degree angle and at maximum deviation.

The officer will also look for whether the eyes track the object smoothly or in a jerking motion and whether they converge when the object is drawn close to the center of the face.

The Romberg Balance test is based on the theory that an intoxicated person will have difficulty maintaining his balance with his eyes closed.

The test also measures the driver's internal clock, based on the belief that an intoxicated person perceives the passage of time more slowly.

The officer will ask that the driver close his eyes and estimate 30 seconds. During the test, the officer will look for swaying in the body or other attempts to maintain balance, among other factors.

The Walk and Turn test is meant to test both coordination and the ability to follow instructions.

The officer will instruct the driver to stand with one foot in front of the other during the entire instruction phase.

The officer will then instruct the driver to take 9 steps along an often-imaginary line with the front foot's heel touching the back foot's toes on each step.

The officer will instruct the driver that, after taking 9 steps, he is to pivot and take an additional 9 steps.

The officer will even instruct the driver in which direction to turn when pivoting and will take note if the driver turns in the wrong direction.

During the test, the officer look for whether the driver stops walking, steps off the (imaginary) line, fails to touch heel to toe, raises his arms to balance, or takes more or less than 9 steps in each direction, among other factors.

The One Leg Stand is also used to test both coordination and internal clock.

The officer will instruct the driver to stand with his hands at his sides, to raise one foot off approximately 6 inches off the ground, and to count out loud (one one-thousand, two one-thousand…) until instructed to stop. The test is intended to last for 30 seconds.

During the test, the officer will look for swaying, the use of the arms for balance, hopping, and the lifting and lowering of the raised foot.

The Finger to Nose test is based on the theory that an intoxicated person will have difficulty touching his finger to his nose when his eyes are closed.

During the test, the officer will look for swaying, for failure to touch the tip of the nose, or for failure to withdraw the finger promptly, among other factors.

The Preliminary Alcohol Screening Test is a breathalyzer test that is conducted in the field and prior to the driver being arrested.

Because this test is considered a Field Sobriety Test, it is not governed by Title 17 of the California Code of Regulations, which requires that certain standards be followed for chemical tests.

Most significantly, the officer is not required to maintain continuous observation of the driver for 15 minutes prior to administering the test.

It's important to keep in mind that, although the Field Sobriety Tests (including the PAS) are voluntary, the chemical test administered after you are arrested is not.

Once you have been placed under arrest, you must submit to either a breath or blood test.

The failure to choose one or the other, including silence in response to an officer's question as to which you choose or the request to speak with an attorney before making a choice, will be treated as a refusal.

If you choose breath and it is not available or malfunctioning, then you must submit to a blood test.

The failure to do so will result in the imposition of a one-year hard suspension of your driving privilege. You are not entitled to restricted license during that time.

Some individuals are unable to pass a test even when entirely sober, due to a physical condition, the condition of the road surface, type of shoe worn, and/or a lack of coordination or balance.

Our experienced attorneys will use any instance of fault or inaccuracy in your DUI arrest to defend your rights and help to keep you out of jail.