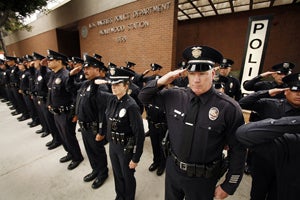 Law enforcement officers in Los Angeles County are not exempt from facing legal issues. In fact, it is not uncommon for police officers to find themselves involved with criminal, internal affairs, or civil investigations and lawsuits. Unfortunately, law enforcement officers are a frequent target of unsubstantiated accusations or simply false allegations.

Just an accusation of misconduct, even without merit, can be damaging to their reputation and career. Off duty misconduct can also result in a police officer becoming a defendant.

The lives of police officers are put in jeopardy on a daily basis and they may be forced to make a life-or-death decision when they least expect it. Part of their daily responsibilities can include split-second critical decisions in chaotic environments. In a situation where a suspect is resisting arrest, police officers are forced to subdue them. While the officer may believe their reaction was reasonable and within departmental guidelines, some in society and the media will closely scrutinize every detail in an effort expose alleged misconduct by police nationwide.

Most people don't understand or even care that the police officer does know the suspect they are arresting. They could be armed with a weapon and willing to use it against the officer if given the opportunity. Suspects have a substantial motive to fabricate the circumstances. If the incident is covered by the media and there are allegations of misconduct, there are immediate demands for the officer's arrest and termination. The police department is put under immediate pressure to take action.

With the continued technical advancements and affordability of cell phones, more and more citizens are filming police officers during any type of interaction with the public. The result can be an investigation of the law enforcement officer for misconduct, violation of someone's civil rights, or even federal charges. Police officers have become a frequent and high visibility target of Department of Justice prosecutors who target officers as examples or follow a political agenda with no consideration for their rights.

When a police officer is charged with a criminal offense, it's critical they consult with an experienced criminal defense lawyer immediately. Prosecutors handle cases involving law enforcement officers aggressively in order to demonstrate they are not above the law. In some cases, the prosecutor may feel pressured to make an example of the police officer and seek more severe consequences.

Some examples of critical incidents that may affect your professional career include squad car accidents, shootings, filing a false police report, planting evidence, concealing exculpatory evidence, weapon discharge, death of a suspect in custody, and questionable use of force. When you are facing the loss of your livelihood, administrative discipline, and other negative consequences to your family, you should retain an experienced attorney immediately.

At Eisner Gorin LLP, our Los Angeles criminal defense law firm understands you have a complicated job. We represent law enforcement officers accused of a wide variety of allegations, including:

Our law firm will thoroughly review all the facts and circumstances in order to develop an effective defense strategy. Early intervention into your case by our law firm can have a huge impact on the outcome of your case. We are powerful advocates in court and the media for police officers who are facing life-changing allegations.

With your license and lifetime earning potential on the line, you need an aggressive criminal defense lawyer to protect you. A criminal conviction will change every aspect of your life.  Even with your familiarity with the legal process, you should never make statements to an investigator without first consulting legal representation. Whether you are the subject of a misconduct investigation, internal affairs investigation, or criminal investigation, you need to retain an experienced Los Angeles law enforcement defense attorney as soon as possible. Hiring a defense lawyer is not an admission of guilt, but rather a proactive approach to protect your legal rights and career.

If you are a law enforcement officer and are seeking experienced legal counsel with a police defense matter, call our law firm at (877) 781-1570 to speak with a defense attorney at Eisner Gorin LLP. We have offices located in Van Nuys and Century City, California.