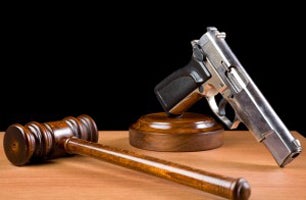 Typically, a conviction for any felony offense will result in a lifetime ban on your ability to possess or own a gun.

Being convicted of a crime under California State law can impact your Second Amendment right to keep and bear arms under both California and federal law. In general, a conviction for any felony offense will result in a lifetime ban on your ability to possess or own a gun.

Certain misdemeanors, such as those involving domestic violence or even drug offenses, may also result in temporary or lifetime bans depending on the conduct which gave rise to the conviction. In addition, you can't legally own or possess a gun if you are addicted to drugs, under 18 years old, suffering from mentally illness, prohibited by court order as a condition of probation.

The California and federal laws concerning gun restrictions is complex, and require fact-specific analysis on a case-by-case basis to determine if any apply. Below you will find an overview of some of the options to restore your gun rights after they have been restricted due to California criminal conviction.

In general, there are two basic options to have your gun rights restored after a conviction. They include having your felony case reduced to a misdemeanor and receiving a pardon from the Governor of California.

It should be noted that while a reduction of your offense to a misdemeanor may provide relief under California state law, federal law does not recognize the effects of either post-conviction reductions of the level of offense or expungements pursuant to Penal Code Section 1203.4.

As almost all gun purchases occur through federally-licensed firearms dealers, the practical reality is that a federal ban on ownership will prohibit any ownership, even if gun rights are restored under California state law.  Based on our experience, only a pardon from the governor of California is effective at restoring your pardon under federal law as a pardon renders the conviction a legal nullity.

It should also be noted our law firm does not handle this type of work, but this is the law in the area of restoring gun rights. We refer people to the Los Angeles County Bar Association and the San Fernando Valley Bar for further information and any work on the matter.

Under California law, a Penal Code 17(b) reduction of a felony charge to a misdemeanor is usually the quickest and easiest to obtain option for restoring your gun rights under California law. Note that, as discussed below, these reductions will likely not impact the federal gun restrictions which may apply to your case.

This unambiguous language means what it says, and unless the Legislature states otherwise, a defendant stands convicted of a misdemeanor, not a felony case.

Federal law often overlaps with California law with respect to those individuals whose gun rights are restricted or removed completely due to prior convictions. The most common restriction which gives rise to federal prosecutions is felon in possession.

Federal law prohibits the possession or ownership of a firearm by felons, which it defines as anyone convicted in any court of an offense punishable by more than one year. Notice the two possibly counterintuitive points about this rule:

If you were granted probation or sentenced to only a few days in jail, but the statute under which you were convicted can possibly result in 366 days or more of confinement, you may lose your gun rights for life under federal law.

There is an exception to this rule for State crimes classified as misdemeanors which are punishable by less than two years in jail. Contact a Los Angeles criminal defense attorney from our office for more information.

Unfortunately, federal courts have held that Section 17(b) reductions, as discussed above, do not restore federal gun rights. In general, the courts will look to the original charge of conviction and, if it is even possible to be sentenced to greater than one year, the gun ban will apply.

This affects many California defendants who have been convicted of “wobblers.” In California, a wobbler is a crime which may be charged as either a misdemeanor or a felony.  Section 17(b) is often used after the fact to reduce a felony conviction to the misdemeanor version of the same crime.  While these reductions still provide substantial benefits to the defendant under California law, restoration of federal gun rights is not one of them.

The federal firearm restriction does contain an exception for convictions which have been expunged, but specifies that the exception does not apply if the State law expungement procedure does not restore gun rights.

Once again, California residents are unlucky as Penal Code 1203.4, the expungement provision, explicitly states that it does not restore gun rights to those whose cases are dismissed pursuant to its provisions. Therefore, the federal exception for expunged convictions does not apply.

There is only one relatively certain way to restore your federal gun rights: obtain a pardon. Pardons can be obtained from either the Governor of California or the President of the United States. In both cases, discretion over whether to grant a pardon rests entirely with the chief executive.

Typically, the main requirement for a California gubernatorial pardon is exemplary behavior over a long period of time. An application for a pardon will not normally be considered unless you have been discharged from probation or parole for at least 10 years without any criminal activity during that time frame. If convicted of a felony under federal law, you must apply for a Presidential pardon.

Restoration of firearm rights is a very narrow legal specialty. Obtaining such relief is frequently complex and time consuming. If you or a member of your family needs help restoring gun rights, we can give you a referral to a local bar assocaion, but we don't handle this type of work. Call our law firm at 877-781-1570.