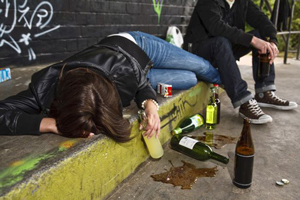 PC 647(f) drunk in public law makes it a crime to be under the influence if you can't care for your own safety or safety of others.

Drunk in public laws are covered under California Penal Code Section 647(f). It's more infamous names are “public intoxication” or “drunk and disorderly.” However, in spite of its popular name, simply being drunk in public is not typically considered a crime.

In most public intoxication cases in Los Angeles County, if you are observed being extremely intoxicated and can't take care of yourself, police officers have the option of detaining you for your own safety in a “drunk tank.” This detention is commonly known as civil protective custody.

If Los Angeles police place you under civil protective custody, they can hold you for up to 72-hours and prosecutors will not file charges against you later. It's important to note this option is only available if police believe you are intoxicated.

If they believe you are under the influence of a controlled substance, they will pursue criminal charges under California Health and Safety Code 11550.

It's also important to note that not all cities in Los Angeles County will place you under civil protective custody because they don't have a drunk tank facility, meaning you will face criminal charges for drunk in public.

In Los Angeles County, a common example of personal behavior that could result in drunk in public charges includes a situation where someone who is highly intoxicated and passed out on the sidewalk, forcing others to walk around or over them.

Drunk in public is a misdemeanor crime than can lead to jail time and a fine. If convicted, it will appear on your criminal record where it can be seen by potential employers. Obviously, having a public intoxication conviction of your record can have a negative impact on your chances of obtaining employment.

If you or a family member has been charged with drunk in public, it's important to consult with a Los Angeles criminal defense lawyer at Eisner Gorin LLP as soon as possible.

In too many cases, people who have been charged with drunk in public will settle for a public defender and accept a quick plea deal, leading to a conviction on their record.

Our law firm will closely review the details of your case, explain what the prosecutor needs to prove for a conviction, and discuss legal option moving forward. First, let's examine the legal definition of drunk in public below.

Under California Penal Code Section 647(f), it's illegal to be under the influence in a public place if you can't care for your own safety or safety of others, or while you obstruct or prevent use of a public sidewalk or street. The legal definition states in part:

In order to be convicted of drunk in public, the prosecutor has to be able to prove, beyond any reasonable doubt, the following elements of the crime:

By legal definition, the term “willfully” means deliberate or on purpose.

A controlled substance is any drug regulated by the government, such as cocaine, methamphetamine, heroin, marijuana, or prescription drugs. Toluene is an inhalant, such as glue or nitrous oxide. A public place is any place that is accessible to the public.

This could include a sidewalk, street, highway, restaurant, bar, shopping mall, park, or even most homeless encampments. Unable to exercise care for your own safety or the safety of others means your condition was so bad you lacked the ability to take care of yourself, or the safety of other people.

In simple terms, it means it was determined you were a public safety risk. Finally, interfering or obstructing access means your condition blocked access to a public way, which could include passing out on a sidewalk or bus stop bench.

A violation of Penal Code 647(f), drunk in public, is a misdemeanor offense. If convicted, you could face the following legal penalties:

However, if you have been convicted of drunk in public 3 times within the past year, you could face a minimum sentence of 90 days in county jail, but the court could suspend this requirement if you attend 60 days in an alcohol treatment and recovery program.

A Los Angeles criminal defense lawyer can use a variety of legal defenses on your behalf against charges of drunk in public, in violation of Penal Code 647(f). These defenses include:

In many Los Angeles County cities, there is a lot of public pressure on the police to clean up parts of the city. In response, police will arrest individuals who are not overly intoxicated just to remove them from a public place.

Due to the minor nature of the offense, it's frequently possible to enroll in a diversion program where you may complete an alternative sentence, such as community service or Alcoholics Anonymous classes, and then have the charges dismissed completely. For most people, the most important consideration is to keep a criminal conviction off their record.

If you have been charged with drunk in public, in violation of California Penal Code Section 547(f), you should contact an experienced Los Angeles criminal defense lawyer at Eisner Gorin LLP right away.

Having a public intoxication conviction on your criminal record can have a devastating impact on your future. Our law firm offers a free immediate response.