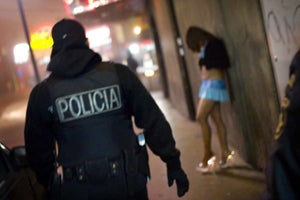 This new law not only expanded the legal definition to include distribution of child pornography, it also provided new tougher legal penalties for anyone convicted of human trafficking.

For example, if you are convicted of human trafficking involving children, you could be sentenced to life in a California state prison.

Additionally, by law, a human trafficking conviction means you would have to register as a sex offender and be required to disclose internet activity for the rest of your life.

Additionally, the new law makes it easier for Los Angeles County prosecutors to pursue a human trafficking case because it adds Penal Code Sections which allows more evidence to be presented in court, such as sex crimes, and it eliminates certain elements of the crime, including mistake of a minor's age.

So, what exactly is considered human trafficking in California? In basic terms, it's a crime involving compelling or coercing an individual to provide labor or services, or to engage in commercial sexual related acts. Coercion is the act of persuading someone to do something by use of force,or threats.

It can be subtle or overt, physical or even psychological. In many human trafficking cases in Los Angeles County, coercion involves the use of violence, threats, or lies.

Any type of exploitation of a minor for commercial sex is considered human trafficking, regardless if any type of force, fraud, or coercion was used. In spite of the name, human trafficking doesn't require travel or transportation of the victim across borders.

In Los Angeles County, many victims of sex trafficking are runaway or homeless youth who came from a background of physical or sexual abuse. A conviction for human trafficking is a serious situation in California, as the courts can double prison terms in certain circumstances.

If you have been accused of human trafficking, you need to take immediate action by contacting a Los Angeles criminal defense lawyer at Eisner Gorin LLP. Under no circumstances should you make any statements to police detectives or federal agents.

Their main goal is to build a solid human trafficking case against you to obtain a conviction. That's what they do. If you make statements to law enforcement, you might unintentionally incriminate yourself and you can be sure it will be used against you later in court.

Our criminal defense attorneys will thoroughly review all the details in order to prepare a solid defense strategy. Now that we have discussed the basic overview of a California human trafficking offense above, let's take a closer look at the legal definitions below.

Depriving or violating someone's liberty legally means substantial and sustained restriction of their liberty, which is accomplished by:

This would have to include circumstances where the individual receiving the threat reasonably believes it's likely the person making the threat would actually carry it out. Forced labor or services means worked provided by someone that was obtained through force, fraud, or coercion.

It's legally defined as depriving another person of their personal liberty with the intent to commit a violation of several specific criminal offenses.

These sexual related offenses include:

It should be noted this legal definition does not require depriving another person of their personal liberty. Contact a Los Angeles criminal defense lawyer at our law firm for more information.

The legal penalties for a human trafficking conviction in violation of California Penal Code Section 236.1 will depend of what specific section you were convicted of. However, it's always a felony offense. The legal penalties include:

However, if you used force, fear, fraud, deceit, coercion, violence, or threat of injury to the victim or another individual in order to commit this crime, the potential California state prison sentence increases to 15 years to life.

In addition, you will face an additional sentence of 5,7, or 10 years in a California state prison if you inflicted great bodily injury on the victim when committing or attempting to commit a human trafficking crime. If you need more information about potential legal penalties or defenses, contact a Los Angeles criminal defense attorney at our law office.

As you can see from the potential legal penalties listed above, a human trafficking conviction in California can result in significant life-changing consequences. A highly experienced Los Angeles criminal defense lawyer from our law firm can use a variety of legal defenses on your behalf. These defenses include:

It's important to note that every human traffic case has its own set of unique facts and circumstances. Our law firm will need to first closely examine the specific allegations and evidence in order to develop an effective defense strategy.