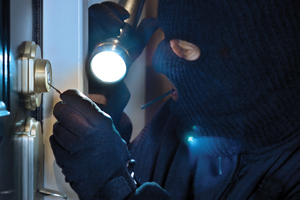 Penal Code 459 PC, burglary is described as entering any commercial or residential structure with the intent to commit theft or any felony once inside.

Under Penal Code Section 459, 460, burglary charges can be filed as a felony or misdemeanor theft case. The law defines this criminal offense as entering a room or structure with the specific intent to commit a crime.

There are two types of burglary theft crime charges.

An example is from a case where a California man got stuck in a chimney and arrested by police after the attempted to commit burglary on a nearby home.

In order to be convicted, the prosecutor has to prove beyond a reasonable doubt that the defendant entered a building with the specific intent to commit a theft crime.

The main issue is whether the individual had the intent of committing a crime when they entered the residence. Consult with a Los Angeles burglary lawyer for more information.

Second Degree burglary in Los Angeles, also known as commercial burglary, can be filed as a felony or a misdemeanor theft crime.

Again, in order to be convicted, the prosecutor must prove that the defendant entered a building with the specific intent to commit a theft crime at the moment they entered.

Call a burglary attorney in Los Angeles at our law firm to review the details of your case.

Proving Specific Intent to Commit a Crime in Los Angeles

Typically, the ability of the Los Angeles County prosecutor to obtain a conviction will depend heavily on whether the specific intent can be proven in court.

This can potentially be proven either direct or circumstantial evidence.

An example of direct evidence can be when the defendant makes a statement to the police they entered the for the purpose of stealing items.

Circumstantial evidence is when an inference of the defendant's specific intent can be established based on facts.

An example would include that if the defendant was found in the residence in possession of burglary tools and/or a bag of stolen items from the house.

In this situation, it would be reasonable to conclude the defendant entered the residence with intent to commit a theft crime at the moment they entered.

If you have been charged with burglary, it's critical to consult with a Los Angeles burglary criminal defense lawyer at Eisner Gorin LLP immediately.

We need to thoroughly review all the details of your theft case to develop an effective defense strategy.

There are several common legal defenses against a burglary case that an experienced criminal defense lawyer in Los Angeles can use to defend you against burglary charges, including:

A conviction for a burglary crime can have a tremendous impact on your future opportunities.

As former Los Angeles County prosecutors, we are well versed with the laws and criminal procedures involving burglary charges.

We have a track record of aggressively challenging the evidence against our clients in order to obtain the best possible outcome. In one case in Van Nuys Superior Court, our client was arrested for felony commercial burglary and grand theft while on probation.

He was sentenced to probation for the same burglary case in Glendale less than a year earlier.

On this new burglary charge, after disposition conferences by our burglary attorneys with the Los Angeles County prosecutor, a plea bargain offer of 16 months in a California state prison was changed to two years special sentencing with three years of formal probation and 300 hours of community service.

The probation violation against our client was revoked and reinstated.

Of course, the primary goal of our lawyers is to obtain a "not-guilty" verdict. However, in some cases where the issue of guilt in not in doubt, our Los Angeles burglary attorneys are experienced and skilled courtroom negotiators and will always seek to have your criminal charges reduced to a lesser theft crime.

For many years and many cases, our expert criminal defense lawyers have successfully represented individuals charged with felony and misdemeanor burglary cases.

If you have are under criminal investigation or already charged with burglary in Los Angeles County, call our burglary lawyer immediately.

We are ready to build a solid defense strategy against your burglary charges.